The Sandra Day O’Connor College of Law at Arizona State University is honoring two third-year law students with its 2014 Gold ‘n Gavel scholarship. The students are part of the college’s renowned Center for Law, Science & Innovation.

The Gold ‘n Gavel Auction, now in its second year, is designed to raise funds for scholarships and other initiatives at the College of Law. This year’s event takes place Sept. 19 at the Phoenix Art Museum. 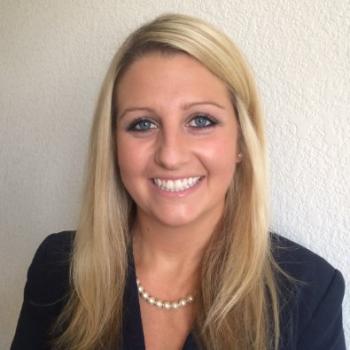 The two outstanding students, David Medina and Kellie Manders, exemplify the College of Law’s quest to continue to attract the best and brightest students from around the country, said Douglas Sylvester, dean of the College of Law.

“The second annual Gold ’n Gavel Auction and Reception is an incredible event, as it shows how deeply our alumni and friends care about the Sandra Day O’Connor College of Law and its ability to attract the highest quality of students,” Sylvester said. “We are a great law school that not only is preparing lawyers for tomorrow, but also significantly impacting society and the future of law today. Kellie and David are great examples of the students we recruit, and soon they will be added to the community of alumni of which we are so very proud.”

Coming from Silicon Valley and the world of startups and tech companies, California native Medina had a passion for intellectual property and knew he wanted to pursue a career in patent litigation. He quickly decided the Center for Law, Science & Innovation at ASU was the perfect fit.

“After learning about the center, I was hooked,” Medina said. “I was looking for a law school that would let me combine my interest in technology and engineering with the law. After discovering that ASU Law had small class sizes, lower tuition costs than many other schools, and a deep selection of offerings in intellectual property, I was sold.”

Medina gave up a career in project management at a Silicon Valley startup to pursue his dream of being in the legal field. “I wanted to be the first lawyer in my family,” Medina said.

Manders began considering law school after graduating from the University of Colorado with a bachelor’s degree in psychology and sociology. She also took a medical mission trip to Nepal. Her passion for health and medicine led her to ASU to study the intersection of psychology, health and the law.

“I chose ASU for many reasons; the biggest was all of the programs ASU has to offer,” Manders said. “The Center for Law, Science & Innovation, the various clinics, externship opportunities and class offerings allowed me to explore every area of the law that I am interested in.”

Both Medina and Manders have made the most of their opportunities for practical hands-on training while at the College of Law.

During his second year of law school, Medina completed an externship at the U.S. Court of Appeals for the Federal Circuit in Washington, D.C. After returning, he also spent part of a semester interning at Bowman and Brooke in Phoenix, as part of the local Diversity Legal Writing Program.

Medina said he loved his semester in Washington, D.C., working in Judge Kathleen O’Malley’s chambers and benefiting from learning about legal research, discovering how judges make decisions, and improving his writing skills.

His time at Bowman and Brooke also provided valuable lessons. “Interning with the lawyers there illustrated what it meant to be an advocate,” Medina said.

Most recently, Medina worked as a summer associate at Orrick, Herrington & Sutcliffe LLP, in Silicon Valley, where he also accepted a position after graduation.

“At Phoenix Children’s Hospital, I was able to use the knowledge I had gained from my health law classes and apply it to my work,” Manders said. “It was an experience that can never be replaced.”

Manders said she was humbled when she learned she was one of this year’s Gold ‘n Gavel Scholars. Without the financial support she’s received, Manders says she would not have been able to attend law school or would have been forced to miss out on much of what she has experienced.

“I would have been obligated to focus more on paying job opportunities,” Manders said. “I also wouldn’t have had the time to participate in student organizations, law review, research clusters, pro bono groups and volunteer events.”

Medina agreed that scholarships were vital.

“I would not be where I am today without the financial support,” Medina said. “I would not have accomplished nearly what I have in the past two years if I had to split my energy between school and supporting myself.”

Medina, a three-time scholar at the Center for Law, Science & Innovation and a Willard H. Pedrick Scholar, said he was honored to add Gold ‘n Gavel Scholar to his list of accomplishments.

“I am now affiliated with ASU Law’s biggest event of the year,” Medina said. “It has helped change my life.”

Researchers discover that rate of rise in cases significantly increased in August in Liberia and Guinea, around the time that a mass quarantine was put in place.

New research published in the online journal PLoS Outbreaks predicts new Ebola cases could reach 6,800 in West Africa by the end of the month if new control measures are not enacted.

Arizona State University and Harvard University researchers also discovered through modeling analysis that the rate of rise in cases significantly increased in August in Liberia and Guinea, around the time that a mass quarantine was put in place, indicating that the mass quarantine efforts may have made the outbreak worse than it would have been otherwise. 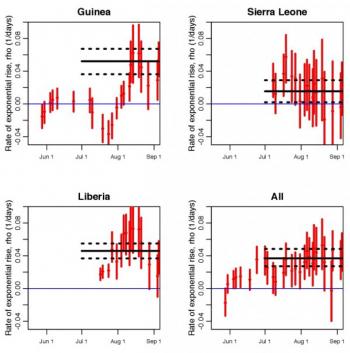 Deteriorating living and hygiene conditions in some of the quarantined areas sparked riots last month. Sierra Leone began a three day country-wide quarantine today, where all citizens have been asked to stay at home, said Sherry Towers, research professor for the ASU Simon A. Levin Mathematical, Computational and Modeling Sciences Center (MCMSC) in the College of Liberal Arts and Sciences.

“There may be other reasons for the worsening of the outbreak spread, including the possibility that the virus has become more transmissible, but it’s also possible that the quarantine control efforts actually made the outbreak spread more quickly by crowding people together in unsanitary conditions,” Towers said.

The study, “Temporal variations in the effective reproduction number of the 2014 West Africa Ebola outbreak,” is authored by Towers, Oscar Patterson-Lomba of the Harvard School of Public Health and Carlos Castillo-Chavez, ASU Regent’s professor and MCMSC executive director.

Researchers assessed whether or not attempted control efforts are effective in curbing the ongoing West African Ebola outbreak that has spread over a large geographic area, causing thousands of infections and deaths. Because the outbreak has spread to densely populated areas, the risk of international spread is increased. Also compounding the problem is a lack of resources for effective quarantine and isolation in the under-developed countries that have been affected, and the high mobility of the population in a region with porous borders, according to the study.

“No licensed vaccine or specific treatment for the disease is currently available. This leaves improved hygiene, quarantine, isolation and social distancing as the only potential interventions,” Castillo-Chavez said. “Improved control measures must be put into place.” On Sept. 16, President Obama announced that 3,000 U.S. troops and medical personnel would be sent to the region to help control the outbreak, he added.

Researchers examined the current outbreak data for Guinea, Sierra Leone and Liberia through statistical research methods up until Sept. 8, 2014, as estimated by the World Health Organization. The analysis examines the local rates of exponential rise to estimate how the reproduction number of cases appears to be changing over time. Calculations showed a range of 6,800 predicted new cases at the upper end of the spectrum and 4,400 on average. The study was funded by the National Institute of General Medical Sciences at the National Institutes of Health.