Today’s students will become tomorrow’s leaders, and educating them about sustainability is increasingly important in light of the complex social, economic and environmental issues the world faces.

Arizona State University’s new National Sustainability Teachers’ Academy aims to bring teams of elementary, middle and high school teachers from across the nation together to establish an educational task force for sustainability. 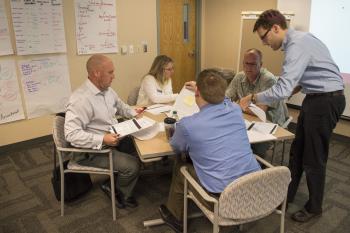 As a program of ASU’s Rob and Melani Walton Sustainability Solutions Initiatives, the teachers’ academy will focus on solutions-based curriculum with an emphasis on urban systems. ASU sustainability scientists and scholars will help coach and lead hands-on sessions on solutions surrounding food, water, energy and climate.

“Teachers are ideally positioned as role models for future generations and have the capacity to reach a younger population that can be inspired to think creatively about solutions,” said Monica Elser, senior sustainability scientist and education manager in ASU’s Julie Ann Wrigley Global Institute of Sustainability. “By combining online learning with in-person participation, we’re preparing our educators with the knowledge and practical skills to foster change agents.”

The 2015 cohort of the teachers’ academy will be composed of teams of two middle school teachers from school districts across the nation selected to participate in a one-week professional development workshop at ASU’s Tempe campus. The workshop will be infused with research and strategies from ASU’s School of Sustainability, the nation’s leader in sustainability education. After the workshops, teachers will return to their school districts to lead workshops of their own, sharing what they’ve learned with their peers. Customized online curriculum and tools will continue to be available to teachers year-round.

“Sustainability touches so many core aspects of our everyday lives,” said Patricia Reiter, executive director of the Walton Sustainability Solutions Initiatives. “By creating experiential learning opportunities that integrate science, technology, engineering and math with concepts of sustainability, our educators can not only teach better, but inspire future generations.”

The academy is currently accepting applications for the first workshop taking place June 22-26.

Addressing a crowd of nearly 2,000 people, Feb. 26 in ASU’s Gammage Auditorium, renowned journalist and author Thomas Friedman contended that maintaining our freedom is going to require a major value adjustment.

Addressing a crowd of nearly 2,000 people in ASU’s Gammage Auditorium, renowned journalist and author Thomas Friedman contended that maintaining our freedom is going to require a major value adjustment.

The Pulitzer Prize winner, who visited ASU on Feb. 26 as part of the Wrigley Lecture Series, explained that society has been built on situational values – do whatever the situation allows. He connected these values to devastating events like the 2008 housing collapse, as well as our current climate concerns. 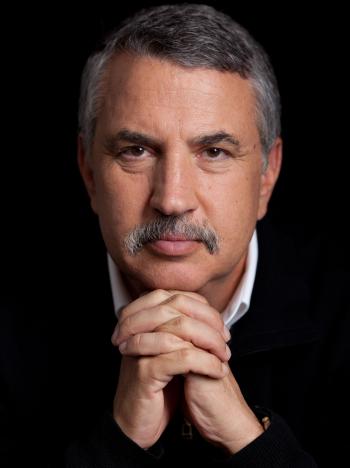 “We’ve been practicing the same faulty accounting in the market and mother nature,” Friedman said.

In his lecture, "Sustainability as Freedom," Friedman discussed the many similarities between society and nature, illustrating how both are complex systems of interdependencies. Unlike nature’s, however, society’s interdependencies are often unhealthy.

“The only way you can choose healthy independencies is if you base them on the right values,” Friedman said. “We will not be free if we don't choose sustainability and sustainable values now. Please don't tell me you'll do it later. Later is officially over."

The impactful talk marked the first of this year’s Wrigley Lecture Series, which serves to engage the community with thought leaders from around the world. It also signifies the largest in terms of attendance, and the first held at ASU’s Gammage Auditorium.

Note: An earlier version of this story originally reported the audience to be nearly 3,000.