ASU joins a global cause to end modern slavery

The U.S. Agency for International Development (USAID) estimates that there are 20.9 million men, women and children enslaved around the world today. These individuals are denied their freedoms and exploited through means of forced labor and prostitution. 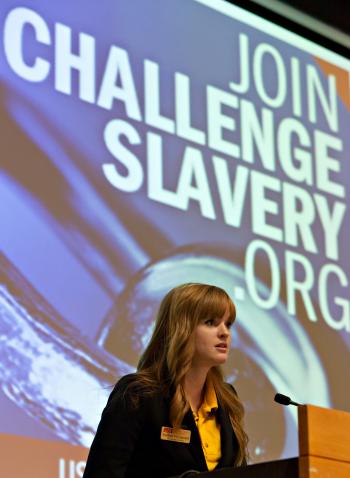 Students and faculty at Arizona State University urged students to help combat the problem on Jan. 9 at “Campus Challenge: A call to action against human trafficking.”

The event, co-sponsored by ASU’s College of Public Programs, ASU Global and Changemaker Central, was created to raise awareness for ChallengeSlavery.org, USAID’s Counter Trafficking in Persons Campus Challenge. ASU Global, a part of the Office of Knowledge Enterprise Development, works with local, national and international partners to find solutions to the most complex challenges facing our world today.

“ASU is committed to the idea that universities must participate in solving problems,” said Jonathan Koppell, dean of the College of Public Programs, in his opening statement. “This challenge is a call to action that as a group and as individuals, we can be agents of change.”

The Campus Challenge from USAID is simple: students are encouraged to submit ideas on how technology can be used in positive ways to combat the spread of trafficking and provide assistance to trafficking victims.

The event also presented other ways in which students can become involved, including visiting sites such as Not For Sale and Slavery Footprint, to raise awareness and reduce consumption of goods produced through slave labor.

Groups including the International Rescue Committee (IRC), Unchained Movement and Dignity House were also present and disseminating information at the event.

Students may submit ideas to the Campus Challenge on their own, with a partner or as a member of a team. Winners will be announced in March and will be invited to showcase and discuss their ideas and receive prizes of up to $5,000.

The application deadline has been extended to midnight on Jan. 31. For more information on contest rules and how to enter visit ChallengeSlavery at https://www.challengeslavery.org/.

Jahii Carson finished with 20 points for the second-straight game.

The Arizona State men's basketball team continued their road trip in Oregon, Jan. 13, this time coming out with a different result, dropping their tilt with the Ducks, 68-65. The loss is only the Sun Devils' third, and first in Pac-12 play as they move to 14-3 (3-1).

Things were all square early on between the two Pac-12 foes as the teams were tied at nine at the first official timeout, thanks to five quick points by ASU freshman point guard Jahii Carson. The Sun Devils came out of the timeout and quickly gathered a 19-11 lead, but were countered just as quickly by the Ducks.

Oregon went on a run of their own, as they scored the game's next 12 points to take the lead, 23-19. The Sun Devils regained the lead thanks to a three-pointer by Jonathan Gilling, but the Ducks proved a little too much for ASU for the remainder of the first half, as they took a 32-28 lead into the locker room.

Evan Gordon led the way for the Devils at the half with 10 points, followed by Carson's seven points and two assists. Big man Jordan Bachynski finished off the first 20 minutes of play with eight points, three rebounds and two blocks. ASU had eight turnovers in the final nine minutes of the first half.

It was Oregon who started hot in the second half, jumping out to a 39-32 lead before the Sun Devils responded, going on a 6-0 run to once again pull within one. The Devils remained close for much of the second half, but struggled to gain and maintain a lead of their own.

The Ducks started to pull away as they led 51-46, but Carson came up big for ASU, hitting a runner in the lane while getting fouled. He completed the three-point play trimming the lead to two.

Finally Arizona State grabbed the lead back with 7:08 to play in the game, as Carson found Gordon, who got the defender to bite on the pump fake as he stepped in and drained a long two. The lead was short-lasted, however, as both teams struggled to take control of the game.

Coming out of the final official timeout Carson hit one of two free throws, which tied the game at 57, setting up for an exciting finish between the two teams.

The Ducks hit a shot on their following possession, but Carrick Felix responded with a three to help the Sun Devils regain the lead, 60-59. The lead was short lived as the Ducks hit a bucket on the other end, once again gaining the edge. They then extended the lead to three with another basket.

Carson then hit a finger roll on an isolation to cut the lead to 63-62 with just over 40 seconds to play, but Oregon countered with two free throws on the other end.

Gilling tried to answer but missed a three-pointer which was rebounded by the Ducks, who in turn made two more free throws, seemingly incing the game with 13.6 seconds to play.

The Sun Devils and Carson refused to go quietly, however, as the freshman sensation drilled a pull-up three with 7.1 seconds to play. The Ducks hit only one of two free throws after, missing their first free throw of the night to give ASU a final shot down by three, but Felix missed wide from the perimeter as the buzzer sounded, giving Oregon their 14th victory of the season.

Carson led all scorers with 20 points to go along with his seven rebounds and four assists, while Gordon finished with 17 points on 3-6 shooting from behind the arc. Felix had 12 points and six rebounds after coming off back-to-back double-doubles.

The Sun Devils finished the game shooting 47.3 percent from the field on 26-55 shooting. Oregon shot only 40.7 percent on 24-59 from the floor. ASU played a relatively clean second half and finished with only 12 turnovers after struggling in the category during the first half.

The loss drops Arizona State to 3-1 in Pac-12 play. They will return to action against their in-state rivals Arizona on Jan. 19, as the game is slated for 12:30 p.m. (MT) from Wells Fargo Arena in Tempe.