Arizona State University is joining together with Intel to challenge college and university students everywhere to create more optimistic and engaging stories about sustainable futures.

Tomorrow Project USA, a collaboration between ASU’s Center for Science and the Imagination (CSI) and Intel’s Tomorrow Project, is currently hosting a student writing competition, “Green Dreams,” to solicit original stories and essays that envision the beauty of green: fact-based, thoughtfully optimistic visions of the future powered by sustainable living, renewable energy and game-changing technologies. 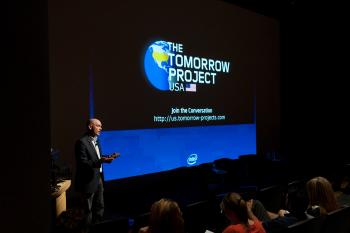 The competition ends on Saturday, Dec. 1.

Students whose work is selected to appear in the “Green Dreams” anthology will receive a $200 award furnished by the Center for Science and the Imagination, and have their work published through the Tomorrow Project USA website. Participation in the competition is limited to college and university students everywhere.

“When we talk about sustainability, we tend to focus on the problems," says CSI director Ed Finn. "We discuss deprivation and calamity. We anguish about cutting back and preparing for the worst. But sustainability can’t only be about what we should stop doing and enjoying because that’s a message nobody wants to hear.”

The competition is part of a larger effort across Arizona State University to craft new narratives that will inspire people to engage with the grand challenge of sustainability not just because of fear of catastrophe, but because they are inspired to create a more equitable, beautiful and exciting future.

The competition’s goal is to use the power of narrative to share detailed, humanized visions of a future in which social and cultural, as well as scientific and technological, methods support more sustainable ways of life.

“We can change the future by changing the story we tell ourselves about the future we are going to live in,” says Intel futurist Brian David Johnson, who leads the Tomorrow Project.

Stories and essays published in the “Green Dreams” anthology will encourage more constructive and detailed thinking about how sustainability can be a core value in the future we are building together, and encourage students to consider how their own career and personal choices contribute to the larger picture of global sustainability efforts.

The competition will be judged by an international editorial board of scholars, journalists, artists and futurists jointly chaired by ASU’s Ed Finn, director of the Center for Science and the Imagination and assistant professor in the School of Arts, Media and Engineering and the Department of English, and Gregg Pascal Zachary, professor of practice at the Walter Cronkite School of Journalism and Mass Communication and the Consortium for Science, Policy and Outcomes. The board also will include two student representatives from ASU – an undergraduate student and a graduate student. Its external members bring a broad range of expertise to the project:

• Rosalyn Berne, professor of science, technology and society at the University of Virginia and an expert on the convergence of technology, ethics and religion

• Chanda Chisala, Zambia’s leading software programming expert and a fellow at the National Endowment for Democracy

• Cindy Frewen Wuellner, professor of future studies at the University of Houston and architect and owner at Frewen Architects Inc.

• Peter Leyden, founding editor of Wired, founding director of the New Politics Institute and founder of Next Agenda, organizations that help political groups and think tanks leverage digital technology to share their message and connect with the public

• Colin Milburn, Gary Snyder Chair in science and the humanities at the University of California, Davis, and an expert on the cultural relations between literature, science and technology

• Alex Pang, professor of computer science at the University of California, Santa Cruz and futurist at SRI International, a research institute for government and business

• David Winton, co-founder of Winton/duPont Films, a filmmaker working primarily in the fields of technology and science

The ASU Foundation for A New American University will observe #GivingTuesday — a nationwide call-to-action to Americans to give during the holiday shopping season.

The ASU Foundation for A New American University will observe #GivingTuesday – a nationwide call-to-action to Americans to give during the holiday shopping season. The foundation will do its part in two ways: by matching item-for-item any food brought in for its annual Food Drive Challenge and by encouraging employees to participate in an American Red Cross blood drive being held at the Memorial Union on Tuesday.

“As team members at the ASU Foundation, we know about giving,” says R.F. “Rick” Shangraw Jr., chief executive officer of the foundation. “On Tuesday, the foundation will encourage its employees to give to people who need help. We’re excited to participate in this national day of giving. It’s a wonderful way to begin the holiday season and another opportunity for us to demonstrate our commitment to helping others.”

Spearheaded by New York City’s 92nd Street Y and a core group of founding partners, including the United Nations Foundation, #GivingTuesday is a movement designed around the annual holiday shopping season. Organizers hope to see it join “Black Friday” and “Cyber Monday” as an important part of the seasonal calendar.

Retailers, charities, organizations, community centers, families and individuals are being encouraged to come together to find ways to give back to their communities. Each partner is responsible for its own initiative, as #GivingTuesday is not a funding organization, but rather an umbrella under which projects will take place.

There are many ways participants can help, organizers say.

Those include launching a campaign to support a cause, creating an online giving initiative, organizing volunteers – even holding a bake sale to benefit a cause. Businesses can also – like the ASU Foundation – match employees’ donations on that day.

Organizers hope that these collective efforts will inspire a movement and start a new national dialogue on giving.

“Imagine what it would be like if everyone who can give, would give,” Shangraw says. “This is a great way to get that idea out there, and get the dialogue started.”

For more information on the foundation and its efforts on behalf of #GivingTuesday, go to asufoundation.org.

For more information on the founding partners, go to givingtuesday.org/partners.

For more resources and ideas, go to givingtuesday.org/resources.