Are we losing our humanity?

Fans of "Star Trek: The Next Generation" know and love Data, the android whose overarching desire in “life” is to be human – to be able to feel emotions, to experience love.

But Data lacks, and will never have, the one element that makes us truly human – the soul.

In an effort to promote conversation and thinking about humanities, ASU is launching “The Top 10 Questions Humanities Will Answer This Year.” Each month a new question will be posed and answered in different formats by individuals across the globe and from multiple perspectives.

The first question is: Are we losing our humanity?

Obviously, we cannot physically cut our souls out of our bodies, but might we be “losing” them just the same, and entering the territory of a Data-like person?

“We’re not losing our humanity. We as humans, get or act stupid, irresponsible, neglectful, and such, but unfortunately that's part of being human,”  Ortiz says.

He added, “But at the same time, we're also kind, thoughtful, compassionate and considerate, fortunately – although we get too smart for our own good, too!”

Ortiz commented on recent riots caused by a video seen as anti-Islamic.

“We’ve gone over the edge. Anger is worldwide,” he said. “Religions are needed, but the differences between them get attention. People react to each other based on what their prejudices are. We are protective. But we are, in many ways, similar to each other. Violence is always wrong. Most of the time the result is pain.”

Ortiz also views humanity through the lens of an ethnic minority. “Sometimes we, as ethnic minorities, feel we are the last in line, and we are in the wrong.”

This outlook has to do with the fact of social placement determined by mainstream society and culture, making minorities last in line and in the "wrong" ethnic group, Ortiz explains.

Ortiz was recruited to teach at ASU in 2007 and came to Arizona reluctantly. “I didn’t want to be here,” he said. “Phoenix was such a big city. And I knew some of the history of Arizona. I wanted to be sure I’d be treated fairly.”

Ortiz said he sees promising change at ASU, with more and more minorities enrolled, and with students open to the changes. The key to eliminating that “last in line” feeling for minorities is contact: “between you and me, you and others, faculty and students, and so on. That is really needed in this time.”

Elisabeth Hayes, the Delbert & Jewell Lewis Chair in Reading & Literacy, agrees with Ortiz that we are not losing our humanity. Through her work, she has seen that the wave of technological advancements made in computers and gaming draw people together and enhance human characteristics.

“There is this stereotype of people being glued to a computer screen and losing the ability to communicate. As it turns out, we’ve seen that games are often a hub for social interactions,” Hayes said.

Hayes says that now there is a trend growing in which gamers will get together in online infinity spaces to discuss video games, create fan art, share fan fiction and even play the actual games with one another.

“Games have potential to enhance our ability to relate to each other when you think beyond what is in the box. You are able to create a shared vision and coordinate. They also give us more empathy by immersing us in environments and letting us take on identities that are different from the ones that we have in the so-called real world,” she said.

As for the idea that young adults growing up with this new technology may be losing basic interpersonal skills, Hayes says it is just a misconception brought on by fears of prior generations.

While technology has certainly done a lot to advance our society, Anna Barker, director of the Transformative Healthcare Networks, feels that it may be a direct contributor as to why we are losing humanity.

“Our humanity is demonstrated by direct communication with one another. Today we can’t seem to communicate without using some form of technology. The consequences of that are isolation for some people because we aren’t engaging with those in our immediate environment,” she said.

Barker also feels that societal changes are causing the rights of the individual to be valued more so than concerns for the overall population. The rise in popularity of reality television is a perfect of example of this “celebration.”

“The individual wants to be celebrated and have their 15 minutes of fame. It could be at the expense of their family, but it’s become about whatever “I” want not what is good for society. They are being paid to be exploited,” she said.

Barker agrees with Ortiz about worldwide anger causing people to go “over the edge.” In her opinion, society has lost the ability for tolerance. Political issues, specifically, seem to be black and white without room for opposing views in a free forum exchange of ideas – a red flag that something is wrong with society.

So after looking at both sides of the coin, are we losing our humanity? Or, are we simply redefining what it means to be human and how we communicate? Let us know your thoughts by joining the conversation on humanities.asu.edu or facebook.com/projecthumanities.

Look for next month’s question: How does technology affect what it means to be human?

Arizona Supreme Court Chief Justice Rebecca White Berch spoke to a criminal law procedure class taught by faculty associate Peter Gentala on the ASU Downtown campus, Sept. 27. Berch, a former state solicitor general and assistant attorney general, spent an hour with criminology and criminal justice students talking about how the court system works and answered a wide array of questions about her experience as a justice and chief justice.

Berch told students she once wanted to be a police officer, but wouldn’t qualify at the time as she was too short and didn’t have 20/20 vision. Instead, she went to law school and litigated cases as an attorney before joining the ASU law school, where she taught and ran the legal writing progam. When former ASU law classmate Grant Woods was elected Attorney General in 1990, she accepted his offer to be the state’s solicitor general, handling the department’s civil appeals. 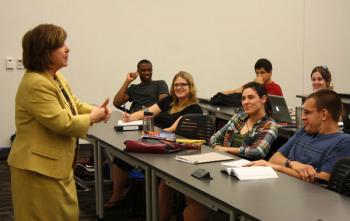 Berch reminded students that those who pursue careers to uphold the law must hold themselves to a higher standard. She said it had never occurred to her that police officers would lie on the stand, but said she got straightened out pretty quickly.

“Police officers and prosecutors represent society as a whole,” said Berch. “And, if you do that, you have to do that honorably.”

That message was not lost on David Nevarez, a junior majoring in criminology and criminal justice, who is planning a career in law enforcement.

“I was kind of interested in how she mentioned that some people who aren’t ready to follow the law – that take the law into their own hands – shouldn’t go into law enforcement,” said Nevarez. “I think she just made it clear you have to follow the law directly.”

Berch explained to students how the Arizona Supreme Court decides to accept about 70 or so cases a year from 1,200 petitions submitted for review. She also answered a question about why it takes so long for someone sentenced to death to be executed. The Chief Justice said the state appeal process can last several years before it goes to the federal courts for a habeas corpus review, which can last almost a decade. Berch said it can then take a couple more years to hear post conviction relief petitions on the grounds of new evidence or poor legal representation.

David Bonar, a junior in the School of Criminology and Criminal Justice, felt the visit by the chief justice was significant and appreciated what she had to say.

“It’s very relevant to a lot of our course of study and the direction we’re intending to head,” said Bonar.

Berch was asked by a student if any criminal cases she was involved in stood out to her today. She said it’s hard to forget cases in which parents killed their kids in a cruel manner, including one where a father set his daughter on fire, and another where a child died after being confined to a closet.

Berch then told a story about a man dressed in a robe and beard who tried robbing a Walmart store. He pointed what turned out to be an umbrella at employees and began threatening them, asking for money. But the employees couldn’t understand the man wearing a Jesus costume because he had marbles in his mouth.

Criminology and criminal justice junior Adrianna Walters asked Berch several questions, including whether she had any advice on how to prepare for a career prosecuting sex offenses.

“I thought it was very informative and very helpful,” said Walters. “If we could, I would have loved her to stay longer.”

The classroom discussion was the Berch’s third public event of the day.

“It was a surprise to me the extent to which I travel around talking about the Arizona court system,”said Berch.

In addition to talking to students and organizations around the state, Berch also serves on the board of directors for the U.S. Conference of Chief Justices, the board of trustees of the National Conference of Bar Examiners, and on an executive committee for legal education and bar admissions with the American Bar Association.

“I do it to raise the profile of the Arizona court system,” Berch said. “Nationally, I think we have a well respected court system.”

“She is a fantastic ambassador for the court,” said Gentala, who teaches Procedural Criminal Law.

As counsel to the majority party at the Arizona House of Representatives, Gentala has witnessed the chief justice dealing with lawmakers on a formal and informal basis.

“I’ve seen her at the legislature time and time again,” said Gentala. “She takes time with the members and answers their questions.”