On Sept. 15, Arizona State University will be home to a daylong, international event that connects thousands of everyday citizens in 25 countries in the discussion of environmental issues.

Organized by the Danish Board of Technology and hosted in Tempe by the Consortium for Science, Policy and Outcomes at ASU (CSPO), the World Wide Views on Biodiversity (WWViews) event offer participants the opportunity to learn about biodiversity issues, discuss policy choices and express their views. 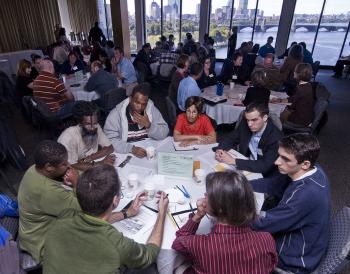 One hundred Arizona citizens have been chosen to match and represent the diverse makeup of the state, an activity repeated by contemporaries in Massachusetts, Colorado and the District of Columbia. These 400 individuals will offer views that represent, as a whole, the average citizen in the United States.

All of the daylong events will be staged exactly in the same way, following a format prepared by the Danish Board of Technology. In addition to the Tempe site, CSPO also will co-host both the Arizona effort and the WWViews project in Washington, D.C.

Designed to provide policymakers with the most accurate information about citizens’ views on globally relevant environmental issues, the results from WWViews will be presented to the delegates of the Convention on Biological Diversity at the Conference of Contracting Parties (COP11) meeting in Hyderabad, India. The goal of WWViews is to increase the representation of citizens from the five continents to international negotiations being undertaken by policy makers, scientific experts, nongovernment organizations and industry leaders.

Biodiversity is a term that refers to the biological diversity of life on Earth and includes the interactions of creatures and organisms, including humans, with the environment. The loss of biodiversity is closely linked to human activity, such as agriculture, new infrastructure and mining, which can impact concerns such as food security and air and water purity.

In addition to this year’s WWViews on Biodiversity, CSPO previously hosted WWViews on Global Warming in 2009.

For more on the Consortium for Science, Policy and Outcomes at Arizona State University, visit: www.CSPO.org.

Supported by a crowd of fans decked out in maroon for the "Maroon Monsoon," the Sun Devils hoped to use the momentum they gained in last week's matchup against NAU and come out strong against the Fighting Illini. 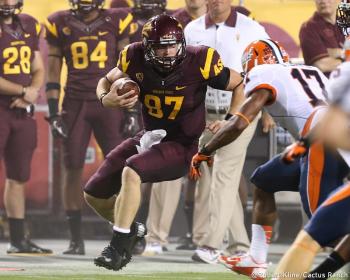 "I want to shout out to the Sun Devil faithful. It was awesome," said Graham. "I want to encourage when we come back home for Utah. The crowd was awesome; it was unbelievable. I¹m so proud of them as well. That¹s why I throw the game ball in the stands every time we win because they¹re our 12th man. I¹m so thankful. It was a big time atmosphere tonight, so hands up to the Sun Devil Nation."

Quarterback Taylor Kelly was perfect in the first quarter, completing all 10 of his passes for 131 yards. Kelly began the game by moving the ball to the Illinois 1-yard line before running back Cameron Marshall fumbled and the Illini recovered.

After a five-yard delay of game penalty on Illinois, ASU's defense took over and prevented the Fighting Illini from reaching Sun Devil territory. Back on offense, the Sun Devils were able to capitalize on a quick drive down the field by Kelly that resulted in a five-yard touchdown by wide receiver Kevin Ozier. It was Ozier's second career touchdown.

After sitting out the previous series, Marshall returned and carried the ball five times and rushed into the end zone for a one-yard touchdown. Alex Garoutte's second successful PAT put the Sun Devils up 14-0. The touchdown was the 32nd in Marshall's career, placing him in a tie with J.R. Redmond for the third-most rushing touchdowns in Sun Devil history.

The defense continued to dominate during the second quarter, sacking Illinois quarterback Miles Osei on two consecutive plays at the end of the quarter. IIllinois began the second quarter on the same drive and was able to navigate past the ASU defense on the ground, as running back Donovonn Young rushed for 17 yards to cut ASU's lead to 14-7.

The Sun Devils took control of the rest of the second quarter, with linebacker Carlos Mendoza intercepting the ball on two consecutive drives, one of which led to a three-yard touchdown reception by tight end Chris Coyle. It was Coyle's second touchdown of the game, as he and quarterback Michael Eubank connected on a one-yard pass earlier in the quarter, and the Sun Devils ended the first half with a commanding 28-7 lead.

"Being under Coach Graham has definitely taught us a lot about ourselves, being men, and being football players," Eubank said. "We¹re able to take what we learned and use it off the field. That¹s why we¹re so determined not to get any penalties. Not getting any penalties is just as important as owning the ball for us."

ASU continued to run the game at the beginning of the second half, with a 34-yard interception by safety Alden Darby leading to a one-yard rushing touchdown by running back D.J. Foster in the first 1:15 of the third quarter.  Illinois failed to score on its next drive, thanks in part to a sack by linebacker Carl Bradford and safety Chris Young. After a quick series by ASU, Illinois was able to capitalize thanks in part to a 51-yard rush by running back Josh Ferguson that led to a five-yard reception by tight end Eddie Viliunas. Both teams failed to score the rest of the quarter, though the Sun Devils came close, driving the ball 66 yards before a fumble by wide receiver Jamal Miles turned the ball over to Illinois.  Illinois failed to take advantage of the turnover, and ASU drove 25 yards and increased its lead to 38-14 on a 35-yard field goal by Garoutte.  The Sun Devils' defense forced a three-and-out on Illinois on the second sack of quarterback Reilly O'Toole by Bradford, but the Illini defense came right back and forced a three-and-out on ASU.  After another stop by the ASU defense, Eubank returned as quarterback and led a 53-yard drive. Eubank rushed for 37 yards on the drive, with the final seven-yard rush resulting in a touchdown to put ASU up by 31 points.  The ASU defense handled the remainder of the game, holding the Illini scoreless and sending the Sun Devils to a 45-14 victory. Kelly was 18-24 for 249 yards and one touchdown, while Eubank went 5-5 for 69 yards and rushed for 36 yards and one touchdown. Marshall led all rushers with 52 yards and one touchdown, and Coyle led all receivers with 131 yards and two touchdowns. ASU defense held Illinois to only 101 passing yards while the offense managed 510 total yards.

"I'm really proud to go two games with no penalties on defense or special teams. It was a lot of work, and we have a good football team," Graham said. "We should have scored 60 points in my opinion. But nobody cares how many yards or how many points; nothing is said about that in the locker room. All we are focused on is winning and winning the right way."  The Sun Devils will travel to Missouri to take on the Tigers in their first road game of the season on September 15.