During his four years at ASU, Ryan Maloney mastered the old adage to do what you love and the rest will follow.

Now he and fellow ASU graduate Mentor Dida are seeing the result of that. Both have been hired to join Ashoka, the largest network of social entrepreneurs worldwide, and help build a vibrant network of social innovators, partners and change makers. 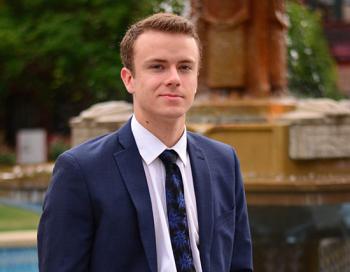 The two rose to the top of the highly competitive interview process and will work at Ashoka in Arlington, Virginia, after graduation in late May. Ashoka was established in 1980 and puts innovative ideas into practice to create change around the globe.

During his time at ASU, Maloney, a digital culture undergraduate in the Herberger Institute for Design and the Arts, followed his passion to help others. He dedicated himself as a change agent for Changemaker Central and helped to empower hundreds of fellow Sun Devils to get involved in community service, high-impact careers and entrepreneurship.

Maloney said that a question posed by an instructor his freshman year helped him re-examine his goals and realize he would have a greater reach if he focused on his passions rather than the security of a paycheck.

“My freshman year, I was an engineering major and I took an ethics course. The instructor asked us to think of an engineer who was leading politically or in business,” he said. “When no one could think of one, he challenged us to reach beyond being just an engineer, to make an impact and do good. In that moment, I started to change my mind-set.”

Fueled with inspiration, Maloney started Table, a fundraising platform for local charities. It allows users to dine at their favorite restaurants while giving back to the community. The start of his new venture later introduced him to Changemaker Central, the Clinton Global Initiative and, eventually, Ashoka.

In 2014, Maloney was accepted to attend his first Ashoka U exchange conference and experienced what he calls “one of the proudest moments of being a Sun Devil.”

“People may not realize it, but ASU is seen as one of the most socially innovative and entrepreneurially minded schools in the world,” he said.

After 13 interviews, Maloney accepted a position with the talent-growth initiative team at Ashoka, which will address economic development in alternative directions. Maloney will work with innovative job-training centers on the East Coast, helping to create a skilled workforce by training and placing 3,500 people into jobs in the first year, with a goal of getting 50,000 people into jobs in five years.

Dida, a global technology and entrepreneurship graduate student, is known in the ASU community for his efforts to eliminate poverty in his homeland, Kosovo, by co-founding the non-profit organization Prosperity Initiative in Kosovo.

His innovative efforts caught the eye of Ashoka, and Dida was offered two positions within the organization. He accepted one within the Youth Venture department, cultivating trusting relationships with peer organizations and increasing connectivity and collaboration among North American social innovators.

"Having the opportunity to work for Ashoka will enable me to expand my horizon and do anything in my power to introduce compassion, kindness and empathy into classroom curricula," Dida said. "I'm looking forward to learning from my colleagues and being inspired at Ashoka."

ASU became the first university in the Southwest to join the Ashoka Changemaker Campus Consortium in 2010. This spearheaded the creation of Changemaker Central on campus and made ASU one of the now 30 higher-education institutions committed to transforming the educational experience into a world-changing experience. In addition, Changemaker Central at ASU received an Ashoka U – Cordes Innovation Award for its high-impact approach to positive change and innovation in social entrepreneurship in 2013.

For Jacqueline Smith, executive director of university initiatives, sending two students to full-time staff roles at Ashoka demonstrates the university’s commitment to harness the energy, idealism and intellect of college students while providing resources and tools to make ideas and dreams a reality.

"When I established ASU’s partnership with Ashoka in 2010, I hoped that by working together we would inspire more ASU students to choose high-impact careers," she said. "Now we are seeing the results of that work."

The emerging field of biomimicry – in which researchers emulate the natural world to develop products – may help make life better for people with visual and mobility impairments, thanks to a grant from Women & Philanthropy, a philanthropic program of the ASU Foundation for A New American University.

Women & Philanthropy will give its largest annual award, $99,072, to the project "Life in Motion: Exploring Biomimicry-based Mobility for People with Visual and Mobility Impairments."

The funding will enable researchers working out of the InnovationSpace Biomimicry Center, within The Design School in the Herberger Institute for Design and the Arts at Arizona State University, to study models from the natural world in order to engineer new technologies that improve the lives of those with disabilities.

The grant was one of five announced by Women & Philanthropy. In total, the group awarded five grants totaling $324,301. Since 2003, Women & Philanthropy has awarded almost $3 million to 79 programs and initiatives in four categories: education innovation, community outreach, student scholarships and health care at ASU.

Women & Philanthropy is one of three engagement programs housed within the ASU Foundation for A New American University. Its grants are generated from the individual contributions of investors, who now number 255. Each member's annual contribution – a minimum of $1,000 – is pooled with others to allow the group to have a greater investment impact on ASU programs and scholarships.

Grant proposals are solicited and reviewed each year by the Women & Philanthropy investment committee and narrowed to a handful of finalists. The entire membership then votes on those that they believe best demonstrate ASU’s leadership and national standing in academic excellence, research and discovery, and local and societal impact. This structure empowers each investor to steward her gift and witness its impact.

New College of Interdisciplinary Arts and Sciences
School of Mathematical and Natural Sciences
$67,929

Development of Next Generation Therapeutics seeks to eradicate diseases associated with neurodegenerative disorders, including the widely prevalent Alzheimer's and Parkinson’s diseases. Researchers aim to re-engineer an FDA-approved drug for cutaneous T-cell lymphoma that is currently being evaluated in two human clinical trials for Alzheimer's disease. They also will explore potential collaborations with other groups at ASU who possess expertise that could benefit the project’s goal of designing and identifying a potential drug compound to treat Alzheimer’s disease.

Scholarships for Needy Students to Pursue Research in Mathematics and Statistics

Academically-qualified students with financial need will receive the scholarship support they need to pursue research under the guidance of mentors from the School of Mathematical and Statistical Sciences. This grant will support ten mathematical science majors who have a GPA that exceeds 3.0 and who have financial need of at least $5,000 – the approximate cost of in-state tuition and fees for the fall 2014 semester. An additional $5,000 will fund student travel to professional conferences so recipients can present their work.

New research has demonstrated that the risk of having a child with autism spectrum disorders can be reduced by 40 percent by folic acid supplementation within one month of conception. Folic acid is known to be important for preventing other birth defects, and now the evidence is strong that it also helps prevent autism. This study will examine the effectiveness of folinic acid, an active form of folate, in reducing the risk of autism.

Arizona now offers a tuition waiver to former foster youth up to 23 years old. To enable their success at ASU, the Bridging Success Early-Start program will offer former foster youth the opportunity to begin their experience in a welcoming community with peers who have had similar challenges and to gain access to support that will ease their transition to the university. Bridging Success will bring together services from across the university and government spectrums, including academic workshops, tutoring, and specialized activities to support former foster youths’ unique needs.

Ira A. Fulton Schools of Engineering Herberger Institute for Design and the Arts University