Kaitlin Vortherms, a graduate student in ASU’s School of Sustainable Engineering and the Built Environment, is shy, bookish and somewhat reserved in social situations. Given those traits, the last place you’d expect to find her is in a pageant requiring a talent performance, an on-stage interview, a private panel interview and swimsuit and eveningwear displays. But that’s exactly where she was last November when she was crowned Miss Phoenix 2015.

So how did someone who likes to avoid the spotlight end up in an official preliminary competition for Miss America? 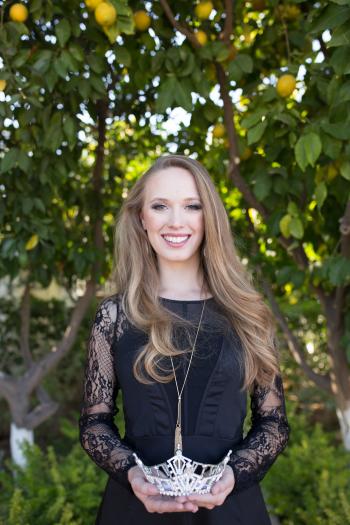 Vortherms had reservations and, she admits, held stereotypes about the pageant and its competitors as too concerned with looks over substance and intelligence. But she decided to enter, and the experience proved those stereotypes wrong.

Prior to the pageant, Vortherms attended multiple workshops put on by the local pageant director to help contestants prepare for the interviews and public speaking.

"I didn’t realize the intelligence, work, courage and commitment it takes for these women to compete,” says Vortherms. “The experience has made a dramatic difference in my presentation skills, relationships and self confidence.”

Ultimately, she also feels the experience has prepared her to be a better engineer.

“My engineering education has been fantastic for a lot of things, but one thing it hasn’t taught me to do is to present myself and talk publicly about things I am passionate about,” says Vortherms.

Improving such skills among engineers and scientists is one of the goals of the Center for Nanotechnology in Society at ASU, where Vortherms is a fellow.

“We work to instill in engineering students the ability to communicate clearly, to make eye contact – to carry oneself in a way that commands respect,” says Ira Bennett, who, as the assistant director of education for the center, mentors the center's fellows. “These skills that will make them more employable later on are found front and center in places like pageantry, where they work tirelessly to help contestants present themselves in a serious and professional manner.”

Such skills also help scientists and engineers connect with a broader public, enabling them to identify their research’s real-world relevancy – or lack of it.

“Universities are incredibly good at making highly competent technical experts,” says Bennett. “We’re not as good at making them understand how to make that expertise valuable throughout many sectors of the world.”

The Center for Nanotechnology in Society brings in fellows from ASU's Ira A. Fulton Schools of Engineering and the Biodesign Institute to work with researchers to produce scholarship that isn’t possible from just engineering or just the social studies of emerging technologies.

Vortherms’ research addresses the need to reform engineering education to include more social and emotional intelligence.

“These are the qualities that engineering education is insufficiently imbued with,” says Thomas Seager, associate professor and Lincoln Fellow of Ethics and Sustainability in the ASU School of Sustainable Engineering and the Built Environment and Vortherms’ adviser.

Vortherms is exploring the role of empathy in engineering, an interest sparked by an undergraduate trip to Uganda. She traveled there with a group of engineering students to build a solar thermal energy generation trough. During the project she recognized the disconnect that can happen when products are designed in a locale vastly different from where they will be used.

“A lot of designs, such as point-of-use water filtration systems, for example, are absolutely brilliant,” says Vortherms. “But they’re only a temporary solution for countries that lack necessary infrastructure. When the product breaks, the technology doesn’t exist to fix them.”

Upon her return to ASU, Vortherms took a new class being offered in the communication of science and engineering. Taught by Boyd Branch, visiting assistant professor in the Herberger Institute School of Film, Dance and Theatre, the class used improvisation to help students develop their presentation and communication skills.

“One of the key components of improvisational theater is building the capacity to empathize with your performance partner,” says Seager. “Kaitlin connected the importance of empathy with this problem of international development and engineering design.”

Together they developed a master’s program to study the role of empathy in engineering, teamwork and design. Vortherms is exploring what interventions, such as Lego Serious Play, improvisation or traveling, might improve empathic capacity in engineers.

“She’s out on the edge of her discipline,” says Seager.

She hopes that the inclusion of social and emotional intelligence in engineering education might also help improve retention rates of women in engineering. “A lot of my female friends went into engineering because they want to make a difference in the world, but that connection often gets lost in the number crunching and weed-out courses of the first couple of years,” says Vortherms. “We lose sight of the bigger picture.”

Another challenge to retaining women in engineering is negative stereotyping. On the one hand, the competency of women, especially of those who wear heels and makeup, is sometimes questioned in the traditionally male-dominated engineering world, and on the other, scientists and engineers are assumed to live out their workdays alone in a lab.

Vortherms is challenging these stereotypes by bringing together her experiences from both worlds.

In the engineering world, she hopes her research will demonstrate that effective engineering requires a strong connection with people and society, much like the pageant promotes.

On the pageant side, she’s integrated STEM (science, technology, engineering and math) throughout her pageant experience, adopting STEM education reform as her pageant platform. For the talent portion, she performed a monologue from the play "Proof," by David Auburn, which brings “math and the human condition together,” says Vortherms.

Vortherms will continue to integrate STEM as she competes for Miss Arizona in June. The winner of that competition will compete for the title of Miss America.

An estimated 1 million Arizonans tuned in last week to "Hooked," a documentary produced by ASU students at the Cronkite School on the growing perils of heroin and opioid use in Arizona.

An estimated 1 million Arizonans tuned in last week to a documentary produced by Arizona State University students at the Walter Cronkite School of Journalism and Mass Communication on the growing perils of heroin and opioid use in Arizona.

The statewide simulcast of “Hooked: Tracking Heroin’s Hold on Arizona,” created by the Cronkite School in conjunction with the Arizona Broadcasters Association, attracted approximately 1 million viewers in Phoenix, Tucson and Yuma, Arizona, based on ratings by Nielsen and Rentrak. 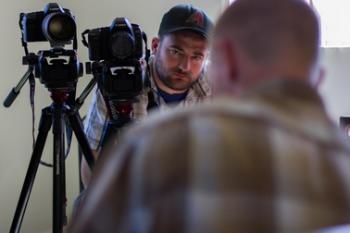 Nielsen estimated nearly 390,000 households in the Phoenix market watched the documentary on television. Rentrak projected more than 117,000 households watched in the Tucson and Yuma markets, which do not have access to daily Nielsen ratings. Estimating an average of two viewers per household brings the total number to more than 1 million.

In the Phoenix market, “Hooked” was the week’s highest-rated program, with twice the number of viewers as the CBS crime drama NCIS, the regular weekly ratings frontrunner. The “Hooked” ratings were nearly half of the Phoenix viewing audience of last year’s Super Bowl.

During and after the simulcast, which aired on all 33 broadcast television stations and 93 radio stations in Arizona, recovery counselors answered 438 calls through an ABA-sponsored call center in the Cronkite School for assistance on heroin and opioid addiction. They spent a total of total of 38 hours and 20 minutes on the phone.

“We were so overwhelmed with the positive response of ‘Hooked,’” said Art Brooks, president and chief executive officer of the Arizona Broadcasters Association. “It’s unusual for highly competitive media outlets to work together, but this project proved that the extremity and urgency of the heroin issue in Arizona is far greater than all of us, and with the power of media and free, over-the-air broadcasting, we could help Arizonans in need.”

The 30-minute documentary traces the rise of heroin use and its impact on Arizonans through the stories of addicts struggling with sobriety, families grappling for solace and law enforcement officials battling on the frontlines.

The documentary includes an interactive website with numerous in-depth stories, data, interactives and counseling resources. In all, eight faculty members and more than 70 students worked on the semester-long project, which was led by Jacquee Petchel, a Cronkite professor and Pulitzer Prize-winning investigative reporter and editor.

“The media typically has a short attention span when it comes to covering issues of importance,” Callahan said. “We are not walking away from this problem which is killing hundreds of Arizonans every year. Our students will continue to report this public danger.”