Recent Arizona State University graduate Courtney Peña is on a trajectory to make a difference.

Having earned both her bachelor’s and master’s degrees at ASU, the Phoenix-area native heads to Stanford University this fall to pursue her doctorate under the tutelage of one of the nation’s most eminent experts on Spanish-English bilingualism, professor Guadalupe Valdes. Peña credits her years at ASU as laying the groundwork for her doctoral research aspirations.

It was as an undergraduate that she first realized the power of academic research to illuminate social issues. Through ASU's School of Human Evolution and Social Change, Peña worked on the South Mountain Village Community Study – a network of interdisciplinary researchers, their students and community stakeholders – to address health and environmental challenges in the South Mountain community.

As part of the project, funded by the National Science Foundation, she conducted extensive one-on-one bilingual interviews with families in South Phoenix. Peña said that collaborating with Seline Szkupinski Quiroga, then assistant professor in ASU’s Transborder Chicano-Latino Studies (now School of Transborder Studies) and co-principal investigator for the project, was particularly inspirational.

“It was because of her that I familiarized myself with research, how to go about it and the importance of it,” Peña explained. “I learned so much from that opportunity. I was gaining a lot of experience that would transition me to where I am now. But at the time, I didn’t realize that was what was happening.”

Shortly after, Peña became a research specialist in the School of Transborder Studies where she contributed to an exploratory study on the contributions of Mexican-origin and Puerto Rican Ford Fellowship scholars in the 1970s-1990s and over the course of their careers. The research, led by Carlos Vélez-Ibáñez, director of the School of Transborder Stuides, with research professional Elsie Szecsy, is scheduled for publication in the Journal of Hispanic Higher Education.

“Since I was responsible for the literature review, I learned quite a bit about the state of Hispanics in higher education,” Peña said. “We looked at all of the issues affecting the college graduation rate of Hispanics – such as poverty, low-income schools, lack of preparation – starting with their K-12 education. Then we followed subjects all the way through their university years as they assumed tenure-track professor and administrative positions.

“What the research found is that Hispanics are underrepresented everywhere in higher education, not only as students, but also as professors and administrators. We found only three to four percent of college faculty and administrators in the United States are Hispanic, while Hispanics constitute one sixth of the nation’s population.”

Before transferring to ASU, Peña worked full-time while attending Mesa Community College part-time to earn her associate degree. She was a Spanish major undergraduate in the School of International Letters and Cultures at ASU, working on a minor in transborder Chicano-Latino studies.

Peña focused much of her graduate research at ASU on Arizona’s Proposition 203 and how structured English immersion (SEI) affects the learning process of English language learner (ELL) students. The initiative measure was passed into law by 63 percent of Arizona voters on November 7, 2000.

“The overall state high school graduation rate in Arizona for 2011 was about 78 percent, depending on the source,” she explained. “The graduate rate for ELL students was 25 percent. That kind of disparity in graduation rates should be a concern because it causes social and economic inequalities.”

While at Stanford, Peña intends to do a longitudinal study of Proposition 203 in relation to Arizona’s high school graduation rate. She said as far as she knows, she is the only one in the doctoral program pursuing the study of ELL students.

“What I hope to do is to track Arizona students who have been through the educational process mandated by Proposition 203 over the past decade,” Peña explained. “I want to get some solid numbers on how this apparently is not working and why more attention should be brought to it.

“I also would like to produce research that makes people think critically about this situation. ‘English-only’ is easy to say and may attract voters, but the problem is that it essentializes a very complex issue.”

Peña said at the time Proposition 203 was passed, an academic team including former ASU English faculty members Jeff MacSwan and Kellie Rolstad reviewed the research summary put forth by initiative proponents. The academics stated that the summary neglected to reference significant research addressing questions raised about Proposition 203, particularly its SEI component. They added that the summary frequently drew inappropriate conclusions from research it presented.

“They sent out a research paper that highly advised against passage of Proposition 203,” Peña said. “It concluded that there is so much existing research saying this is a bad idea that the law should not be mandated. But I’m not sure the paper got the attention it deserved.”

For her doctoral research, Peña said she will track school district numbers in the Phoenix area to provide a representation of how the law is impacting the entire state. “I hope that I’m doing the research for a reason – to potentially inform voters,” she said.

Once she completes her four- to five-year program at Stanford, Peña will graduate with her doctorate in social sciences, humanities and interdisciplinary policy studies with a concentration in educational linguistics.

The School of Transborder Studies, the School of Human Evolution and Social Change and the School of International Letters and Cultures are academic units in ASU’s College of Liberal Arts and Sciences.

Arizona State University’s American English and Culture Program, one of the largest intensive English as a second language (ESL) programs in the nation, is hosting two Teacher Training Programs this fall for academic professionals from Iraq and China. 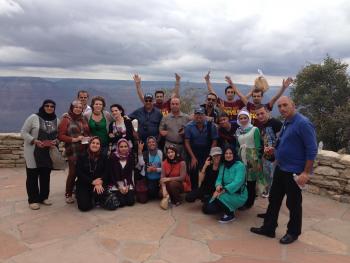 The training workshops are part of ASU’s efforts to engage with global partners and work with them to find solutions to the world’s most pressing issues.

Mark Rentz, director of the American English and Culture Program, says the group works with universities, embassies and ministries of education from around the world to offer customized programs and workshops to meet the needs of English language teachers at different levels of proficiency.

“Most teachers who visit us through the ESL Teacher Training Program are young individuals on the cusp of becoming critical influences on their students’ lives,” Rentz notes. “Our workshops combine instruction in American teaching methods with glimpses into American culture to offer immersive learning of the English language.”

Rentz says the program enables teachers from abroad to compare notes and absorb best practices from their American counterparts.

“In the U.S., we use the Socratic method of teaching that involves question and answer sessions to stimulate critical thinking,” Rentz notes. “As part of teacher-training classes and workshops, program participants observe interaction between ASU professors and their students from various fields, such as business, sustainability and education. The process helps them apply similar skills in their own classrooms.”

Additionally, classroom learning is accompanied by lessons in American culture through field visits.

“We seek to expand the classroom to reach into the local community,” Rentz explains. “ASU offers many opportunities to explore the arts, desert life, desert plants, and college and professional athletics. We take our guests on trips to museums, ballgames, nearby towns and cities, historic sites and even shopping malls. The idea is to provide participants ample opportunity to practice their language skills in real life situations.”

According to Rentz, the group of 25 teacher trainees, including English language instructors and graduate students from Iraq will participate in a six-week workshop, complete with extensive English lessons and homestays with American families to practice the language. The group’s visit was facilitated by a grant awarded by the U.S. Embassy in Baghdad.

The Chinese group, comprised of professors representing nearly a dozen disciplines from Sichuan University in Chengdu, China, is partaking in a three-week program that involves meeting with their ASU counterparts, observing classes in their area of expertise and building English language skills for presentations and publications. The Chinese university has shared a familial relationship with ASU since 2006.

“Although the two groups from Iraq and China are quite different in terms of cultural background and resources, the goals for all these teachers are strikingly similar,” Rentz says. “They all want to better utilize English, technology and interactive teaching methods in the classroom, and maintain new friendships with the American colleagues and counterparts for years to come.”

More information is available at https://international.asu.edu/aecp.