The study, supported by a $250,000 award from the National Science Foundation, will involve placing wearable computers, in the form of necklaces, on scientists who are collaborating in interdisciplinary working groups. This pilot project will utilize a combination of resources from several universities. Parker and Hackett will direct the project, the sensors will come from MIT, and the working groups which they will study – with eight to twelve members - will be from the National Center for Ecological Analysis and Synthesis at the University of California in Santa Barbara, the National Evolutionary Synthesis Center in Durham, North Carolina, and several international research centers.

The computers, called sociometric sensors, are outfitted with infrared transceivers, accelerometers, and microphones, and track how scientists interact with each other quantitatively and in real time, Parker said. The neck-worn devices measure the duration, timing, volume, and pitch of participants’ speech, their physical movement and face-to-face orientation, as well as how many times and for how long they interact with each other.  The nature of the work group interactions, including patterns of activity, emotional energy, gender, nationality, seniority, and expertise will be observed and documented. Participants will be interviewed throughout the study. Questionnaires also will be used.

According to Parker, the idea behind the study is to develop an understanding of how different patterns of organization and interaction influence group performance and creativity, and facilitate deep synthesis of highly diverse scientific theories, concepts and methods.

In their NSF grant proposal Parker and Hackett expressed the goal of their research this way:

“Our main purpose is to build, explore and empirically support an integrative research strategy that will allow us to understand how working groups achieve the unity of purpose, integration of expertise, and intensity and duration of intellectual engagement needed for synthesis.”

“We will examine how social organization, interaction and emotion in research groups give rise to the ideas, methods, commitments and understandings that compose and spread deep originality (potentially transformative research) across a variety of social and intellectual scales.”

The project also has the potential to advance human well-being by working to understand how to best orchestrate highly creative scientific work and link it to broader societal purposes, Parker said.

“This study will not just be accumulating knowledge for knowledge’s sake. We will try to understand how to create an environment and social interactions that facilitate scientific productivity and creativity … how to create conditions that allow scientists and decision makers to collaborate to make the world a better place.”

Parker said he and Hackett intend to publish the results of their research in the future.

Over the past 10 years, Crow has endeavored to build a new sort of university structure at ASU, re-examining and reshaping the very idea of what a university should be. The next 10 years will be just as dramatic.

Editor's Note: The following is an excerpt from "The Long View," written by Christopher Vaughan, that appeared in the September 2012 edition of ASU Magazine. Access full article.

ASU President Michael Crow likes to point out that, unlike American businesses, the most highly ranked universities in the country are inevitably the oldest. This speaks to the power and prestige afforded to academic institutions doing things the way they have been done for a long time. To Crow, this is a mistake. 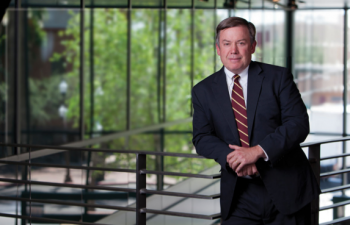 “Universities have become highly bureaucratized, machine-like creatures,” Crow said. “They are rigid social constructs that produce limited tools, and except for the occasional breakthroughs, they are not producing the kind of radical advances we might expect.” They also strive to become more exclusive, and wear their exclusiveness as a badge of honor, he says.

Over the past 10 years, Crow has endeavored to build a new sort of university structure at ASU, forging change at a blistering pace, re-examining and reshaping the very idea of what a university should be. He has cut and shuffled academic disciplines that have been around for centuries to create a New American University, an institution for the 21st century and beyond. The changes that occur over the next 10 years will be just as dramatic, and will strengthen Crow’s structural alterations that will create a paradigm-shifting model for higher education.

To read "The Long View" in its entirety, visit ASU Magazine.