When Souad T. Ali was growing up in Khartoum, Sudan, military dictator General Gaafar Numeiri ruled the country after toppling a democratic government that had lasted for just five years – from 1964 to 1969.

In the late 1970s Numeiri moved toward Islamism, and in 1983 imposed Sharia law throughout the country, using what Ali said was a “distorted version of Islam.” 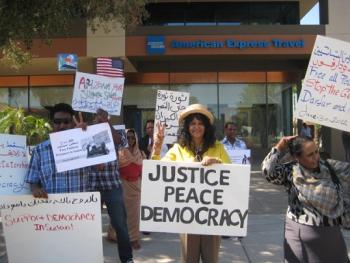 By using his “misconception of religion, he could impose laws across the board. Family and personal status law was based on such distortions of religion,” Ali said. “There was no justice whatsoever under Nimeiri – as is the case with the current dictatorship of Omar Al Bashir, who imposed far more radical laws against women.”

The harsher laws, Ali said, “are reflected in many cases against women who do not dress the way prescribed by the government. Sudanese activist Dr. Samar Mirghani is facing retribution because she demonstrated peacefully against the government.”

Ali, now an associate professor of Arabic literature and Middle East/Islamic studies in the School of International Letters and Cultures, head of Classics and Middle Eastern Studies and director of the Arabic Program at ASU, was an undergraduate at the University of Khartoum in the 1980s when Nimeiri began enforcing Sharia law. She was angered because she says, “I always believed religion should be a private matter, and since an early age I always rejected the oppression of women under the pretext of religion.”

These thoughts formed the basis for what would become first her doctoral dissertation at the University of Utah in 2004, and later an expanded book, “A Religion, Not a State: Ali ‘Abd al-Raziq’s Islamic Justification of Political Secularism,” that was published in 2009.

Her book is a study of Ali ‘Abd al-Raziq’s volume, “Islam and the Foundations of Rule: Research on the Caliphate and Government in Islam,” to which professor Ali was introduced in a graduate class, Political Thought in Islam, at the University of Utah. 'Abd Al-Raziq, an Egyptian scholar who died in 1966, delved into a debate that has been going on since the death of the Prophet Muhammed in 632 A.D., according to Ali: Is Islam a religion or a state?

In her book’s introduction, she wrote that “during the prophet’s lifetime, Islam had spread throughout Arabia and established itself as an organized system of communal life in Medina and beyond.”

“However, because the prophet neither named a successor nor clearly delineated a specific form of government, Muslims have engaged in continuous discussion of, and experimentation with, various forms of governance throughout the last 14 centuries,” she said. “And the discussion of whether Islam is a religion or state has, since the beginning of the 1800s, focused on two forces commonly described as ‘tradition’ and ‘modernity.'”

The basic question is how far ancient traditions should be blended with modern values, if at all.

There is new urgency to the debate, Ali said, with the current resurgence of “Islamic fundamentalism, or the Islamist ideology that advocates the idea that ‘sovereignty belongs to God.’”

These Islamic fundamentalists, including Osama bin Laden, were encouraged by Sayyid Qubt, who died in 1966, and who believed that “Muslims had the responsibility to struggle against the forces of jahiliyya (ignorance) in the 20th century, in order to reinstate the perfect Islamic community and, more importantly, to restore God to his rightful place as the only sovereign and to ensure that the Sharia, the divine law, was the only law governing the Muslim community,” Ali said.

Her doctoral studies at the University of Utah gave her “the opportunity to do an in-depth study and research into previous classical juristic theory of the state, reaching the conclusion that the juristic theories of the caliphate were all human innovations, not a religious imperative as the book details. The Prophet was only a messenger. He was not a political leader.”

Though as a university student in Sudan Ali was involved in the civil struggle to depose the Islamist dictator Numeiri, and saw a democratic parliamentary system put in place in Sudan in 1986, her life was drastically changed when the current dictator Al-Bashir staged his own coup in June of 1989, ousting the government of Sadiq al-Mahdi.

Her husband, Abdullahi Gallab, currently an associate professor in the ASU School of Social Transformation and Religious Studies, who had been the director of Culture and Information for the Sudanese Ministry of Culture and Information, was invited to Boston University as a Fulbright Humphrey Fellow in 1989. While the couple and their three children were in Boston, Gallab learned that he had been fired by Al-Bashir’s Islamist regime.

“It was dangerous for us to go back to Sudan, at which point we applied for asylum,” Ali said.  “We have been freedom fighters since, against the oppression of the Sudanese people."

Through his connections in the academic world, Gallab completed his master’s and doctoral degrees at Brigham Young University and later found a faculty position at BYU, and Ali began her master’s studies in English and taught at BYU. She received her doctorate with honors in Middle Eastern Studies (with a focus on Arabic Literature and Islamic Studies) from the University in Utah in 2004.

With Islamic fundamentalists currently striving to reinstate what they perceive as “the perfect Islamic community” in many areas of the world, one would wonder if Ali worries about a backlash to her book.

“For the most part the book has been received quite positively within academic and scholarly circles,” she said. “But I had discussions with a few who oppose the idea and they have been quite enlightened discussions.

“I know, on the other hand, that the idea is utterly rejected by radicals, extremists and fundamentalists. For the young, or un-educated, or those oblivious to certain facts in Islam and the Qur'an, it takes education to introduce them to these facts to guard against subjecting them to radical influence.”

Ali is currently working on an annotated translation of ‘Abd al-Raziq’s book, which has not been translated wholly into English and is thus largely unavailable to the English reader. She has been invited by Oxford University Press to submit the manuscript for publication consideration as part of their series “Religion in Translation” with the American Academy of Religion.

She also continues to promote cross-cultural understanding and corrects misconceptions between the Western and Arab and Muslim worlds as chair of the newly formed ASU Council for Arabic and Islamic Studies.

The Ira A. Fulton Schools of Engineering is the winner of the 2013 ASU Academic Bowl, picking up $24,000 in scholarship money and holding on to their championship title.

The eighth annual ASU Academic Bowl came to a riveting conclusion Thursday night on the Downtown Phoenix campus, when the Ira A. Fulton Schools of Engineering defeated the W. P. Carey School of Business in the final round, picking up $24,000 in scholarship money to be divided between its players and alternates, and holding on to their championship title. 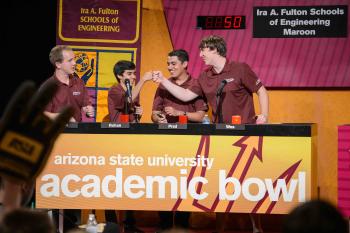 The two finalist teams were well matched and both had a mission: Engineering wanted to defend its championship title and Business wanted their first taste of Academic Bowl victory.

Proving their prowess in everything from literature and geography to chemistry and math, reigning champions Ira A. Fulton Schools of Engineering and six-time Academic Bowl finalist W. P. Carey School of Business faced off against each other three times Thursday night – recording a paper-thin close score of 135-110 (Business) in the winners semifinal round and a score of 175-100 (Engineering) in the first of the two final rounds.

Newcomers School of Letters and Sciences showed impressive skill and speed for a first-time finalist team at the Academic Bowl, however it was not enough to advance to the finals. In the end, the team came in at third place – not bad for their first trip to the final four. Taking home $5,000 in scholarship money to be divided among its players, the School of Letters and Sciences team was comprised of Jonathan Velez, Julian Garcia, Raymie Humbert, Sean Madden and Collin Stevens.

Engineering appeared visibly jumpy for the majority of the night – indicative of the reputation they had to protect. They often lurched on the board like a freight train at the beginning of each match, knowing their U.S. constitution with the same fervor as their 19th-century French writers (Guy de Maupassant, anyone?).

Business was no shrinking violet though; W. P. Carey held its own, going point for point with Engineering – toss-up for toss-up – confident in their wealth of knowledge on world literature and history and Greek mythology.

Like a well-played tennis match, the teams returned each other's points – whirling through a dizzying storm of questions covering everything from NBA players to chemical elements to the names of international organizations. When Engineering missed, Business cleaned up – and vice-versa. Anatomy, check. Pop culture, check. Both teams showed impressive knowledge recall and speed to boot.

Though the competition was fierce, Engineering managed to pull ahead in the second half of the championship match to clinch it 230-75. Their Academic Bowl title was theirs to keep.

This marks the third year the Ira A. Fulton Schools of Engineering has won the ASU Academic Bowl.

This year was the first in which the College of Liberal Arts and Sciences did not compete in the semi-final and final rounds of the bowl. CLAS dominated the competition between 2007 and 2011, taking home the championship trophy every year, until Engineering dethroned them in 2012.

Hundreds of students apply each year to compete in the ASU Academic Bowl – launched in 2006 – and each college chooses its team independently. The Academic Bowl was the brainchild of Virgil Renzulli, vice president of public affairs, as a way to showcase some of the university's best and brightest students in an internal competition.

Be sure to catch all the excitement, rivalry and drama by watching it on Eight, Arzona PBS at 3 p.m. On Sunday, Oct. 20.