Arizona State University’s College of Health Solutions and College of Nursing and Health Innovation are working together to create a healthier environment in support of research about health and the dangers of sedentary lifestyles in the workplace, which has been revealed by such ASU faculty members as Healthy Lifestyles director Glenn Gaesser and international obesity expert James A. Levine.

Recent studies show that office-based workers spend about 80 percent of their workday sitting, which can create health risks for office-based workers over time – including cardiovascular disease, diabetes, obesity, premature death and other risks, which exercise cannot negate. 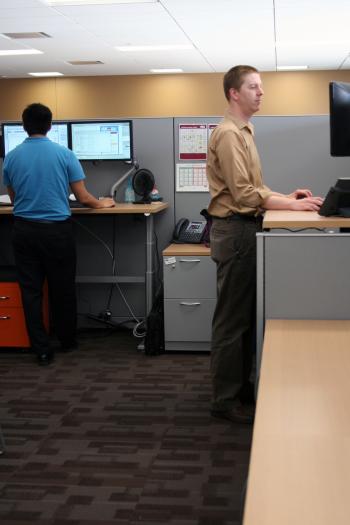 This month, team members from both colleges will be relocating to new offices at the Nursing and Health Innovation II building in Downtown Phoenix, which will inspire workplace productivity and wellness through design and collaboration. These new offices will be outfitted with height-adjustable, sit-to-stand desks and will also have three walking workstations available for use. The open layout will create a transparent and inviting environment.

“We had a few guiding principles when designing the space, which included the prevalence of natural materials and natural light, an environment conducive to interprofessionalism and collegiality, and the overall flow of the space, which is meant to be welcoming to everyone who visits,” said Melanie Burm, chief operating officer in the College of Health Solutions. “Additionally, we found that not only can these changes be a health saver, but they can actually be a cost saver too.”

The project was an opportunity for the colleges to collaborate with businesses such as Capital Projects, Smith Group, Steelcase, Target Commercial Interiors and the ASU Office of the University Architect, to develop a comprehensive solution to reduce sitting time and increase activity in the workplace. Steelcase will be evaluating workplace productivity and wellness to analyze its feasibility to implement the plan to a wider audience and impact health and productivity elsewhere.

The move also presents an opportunity for ASU students to study the impact of the new work environment on team members. Exercise and Wellness graduate student Anna Park is leading a "Sit and Stand" study, which will determine what impact – if any – standing while working and using a walking workstation has on an individual’s overall health. Research results will be ready later this year.

In a new study, ASU researcher Tsafrir Mor shows that a plant-produced recombinant human enzyme can rapidly reverse paralysis of the airways.

Paralytic drugs like succinylcholine are often used during surgery or when critically ill patients require endotracheal intubation. But if the drug is not swiftly cleared from the patient’s system, the results can be deadly.

In a new study, Tsafrir Mor, a researcher at Arizona State University’s Biodesign Institute and assistant professor in the School of Life Sciences, shows that the plant-produced recombinant human enzyme butyrylcholinesterase (BChE) can rapidly reverse paralysis of the airways – or apnea – caused by succinylcholine.

The results, recently reported in the journal PLOS ONE, suggest an expanded role for trauma techniques, like rapid sequence intubation, as well as other methods involving the use of succinylcholine, particularly in the pre-hospital arena, where a speedy intervention can mean the difference between life and death. Given the variety and frequency of conditions involving failed airways, a means of reversing succinylcholine-induced apnea may have profound implications.

“BChE is a promiscuous enzyme that can function as an effective, safe and versatile bioscavenger, but its use has been hampered by its availability,” Mor says. “Plants expressing recombinant human BChE may provide the answer for this limitation.”

The new findings build on earlier work by Mor’s group, which demonstrated the potential for plant-made BChE to reverse the effects of organophosphate poisons, including pesticides and weaponized nerve agents. Possibilities also exist for reversing the effects of acute cocaine overdose or using plant-derived BChE as a cocaine prophylactic, dampening the drug’s euphoric effects and thereby discouraging use.

Succinylcholine is a neuromuscular blocking agent, commonly used in conjunction with a sedative during anesthesia or to allow intubation to be carried out on an emergency basis. Succinylcholine is the drug of choice for such procedures due to the rapid onset and short duration of its effects, as it is rapidly cleared by the patient’s serum BChE.

In certain patients however, clearance can be dangerously prolonged, leading to succinylcholine-induced apnea that can last several hours. The phenomenon has been recognized since the 1950s and may occur as a result of genetic factors or as an acquired condition. In either case, it is generally the result of a deficiency in the serum enzyme BChE.

Because of concerns regarding patient sensitivity to succinylcholine, use of the drug as an anesthetic in pre-hospital situations has been controversial. Lacking hospital resources to deal with patients exhibiting butyrylcholinesterase deficiency, first responders are often reluctant to undertake the risks involved in emergency endotracheal intubation. Currently, cases of post-succinylcholine apnea are typically managed in hospital settings through supportive care, due to a lack of safe, effective and plentiful reversing agents.

Additionally, BChE deficiency can be acquired as a result of conditions including cirrhosis, burns, liver cancer or malnutrition, or as a side effect of some commonly prescribed drugs, including oral contraceptives. The authors of the current study note that the ability to reverse hereditary or acquired apnea could significantly improve the safety margin for succinylcholine, rapidly restoring normal breathing to an affected patient.

Rapidly and safely reversing succinylcholine-induced apnea may open new possibilities for respiratory management, including new devices or medications for acute trauma situations. Such strategies could be particularly useful in cases of upper airway obstruction, where neuromuscular blockage carries a risk of airway collapse and suffocation.

Although missing or nonfunctional serum BChE could potentially be replaced using blood products, including stabilized serum, fresh frozen plasma or purified enzyme, such treatment carries the risk of blood-borne pathogens and prions as well as more common complications associated with transfusion. Mor notes that purification of the enzyme for various applications would necessitate dedicating the entire annual U.S. blood supply to produce a sufficient number of doses.

The solution underlined in the new study involves producing recombinant butyrylcholinesterase in transgenic tobacco plants. The plants are modified to synthesize the BChE enzyme in their leaves. In a series of experiments involving both mice and guinea pigs, Mor demonstrates the ability of plant-derived BChE to reverse post-succinylcholine apnea. The method can be rapidly scaled up to provide a significant stockpile of the apnea-reversing agent, without the costs and attendant risks associated with purifying butyrylcholinesterase from blood products.

Further work by Mor and his colleagues will explore issues of pharmacokinetics, safety and efficacy.