Arizona State University engineers will lead two multi-university/industry research teams in support of a new U.S. Department of Energy program to develop technologies that use the full spectrum of sunlight to produce inexpensive power during both day and night. 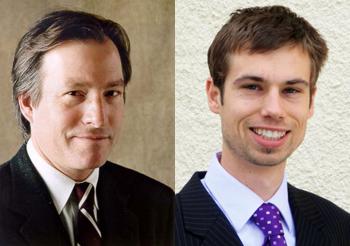 Stephen Goodnick will lead the project High-Temperature Topping Cells from LED (Light-Emitting Diode) Materials, which has been allocated $3.9 million.

Goodnick is a professor in the School of Electrical, Computer and Energy Engineering, one of ASU’s Ira A. Fulton Schools of Engineering, and deputy director of ASU LightWorks, a strategic framework for light-inspired research.

Zachary Holman will lead the project Solar Concentrating Photovoltaic Mirrors, which has been allotted $2.6 million.

Holman is an assistant professor in the School of Electrical, Computer and Energy Engineering.

ARPA-E selects energy technology development projects based on their potential to enhance the nation’s economic and energy security. The projects promise to help reduce imports of energy from foreign sources, reduce energy-related emissions – including greenhouse gases – improve energy efficiency in all economic sectors and ensure the United States maintains a technological lead in developing and deploying advanced energy technologies.

Goodnick’s FOCUS project will develop a photovoltaic device that operates effectively at more than 400 degrees Centigrade (more than 750 degrees Fahrenheit) as the key component of a hybrid concentrating solar thermal power (CSP) system that provides overall higher sunlight-into-electricity conversion efficiency than either a stand-alone photovoltaic system or current CSP systems. It is also to provide a lower dollar-per-watt cost.

The material technology used in the photovoltaic device has already demonstrated its reliability and performance in solid-state lighting applications and should be rapidly applicable to solar systems, Goodnick says.

ASU’s research partners on the project are professor Alan Doolittle at the Georgia Institute of Technology, Soitec, one of the world’s leading providers of concentrator photovoltaic systems and a manufacturer of semiconductor materials for electronic and energy industries, and AREVA Solar, a leader in providing concentrated solar power to a global customer base.

The project team includes ASU professors Christiana Honsberg and Dragica Vasileska, and assistant professor Srabanti Chowdhury, faculty members in the School of Electrical, Computer and Energy Engineering, along with Fernando Ponce, a professor in the Department of Physics in ASU’s College of Liberal Arts and Sciences. Honsberg is director of the Quantum Energy and Sustainable Solar Technologies (QESST) Engineering Research Center at ASU, which is supported by the Department of Energy and the National Science Foundation.

The process is designed to improve the efficiency of how solar thermal power plants generate electricity, promising a significant increase in the daytime output of energy while also being able to store solar energy for power generation at night.

Holman says the photovoltaic cells he will use will replace the traditional silver mirrored surface of the large parabolic troughs now used in solar power plants such as the Solana plant in Gila Bend, Ariz.

The cells will absorb visible light and efficiently convert it to electricity, while ultraviolet and infrared light, which would be wasted if it were collected in photovoltaic cells, will instead be reflected onto a black tube at the trough focus. A fluid in the tube will carry the generated heat to be either converted to electricity with a steam turbine or stored for later conversion, he explains.

His project team includes researchers at the University of Arizona, along with Mariana Bertoni, an assistant professor in the School of Electrical, Computer and Energy Engineering.

Prominent poet and arts critic Claudia La Rocco will be the first Pave Speaker of 2014.

Prominent poet and arts critic Claudia La Rocco will be the first Pave Speaker of 2014. The Pave Program in Arts Entrepreneurship sponsors a series of public talks on the topic; this year, the series focuses on the theme "Thriving as an Artist."

In her talk, La Rocco will reflect on notions of success in the arts. Titled, "What It Looks Like, What It Feels Like," the talk starts at 4 p.m., Feb. 21, in the Lyceum Theatre on ASU's Tempe campus and is free and open to the public. 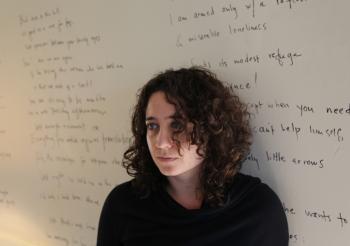 La Rocco writes about performance for The New York Times, is an editor-at-large for the Brooklyn Rail and has written for many other outlets, including Artforum, Classical TV and Musical America. From 2008 to 2010, she served as a cultural critic for WNYC New York Public Radio, where she created the social and online Performance Club, which won a 2011 Creative Capital/Warhol Foundation Arts Writers Grant, and focuses on criticism as a literary art form.

La Rocco is on the faculty of the School of Visual Arts’ graduate program in Art Criticism and Writing, and has taught and lectured in a variety of settings, including Princeton University, ImpulsTanz Vienna International Dance Festival, Movement Research, the Springdance/festival in the Netherlands and the NEA Arts Journalism Institute in Dance at the American Dance Festival. She is a member of the Off The Park poetry press, where she is currently editing an anthology of poems by painters, and reads regularly in New York.

Her recent and ongoing interdisciplinary collaborations include projects with the choreographers Rashaun Mitchell and Silas Riener, the performance company Findlay//Sandsmark, the visual artist Brett Goodroad and the composer Phillip Greenlief. She is a resident artist at the ASU School of Film, Dance and Theatre this semester. A book of her selected writings is scheduled to be published by Badlands Unlimited in fall 2014/winter 2015.

For parking and directions, visit: www.asu.edu/map/interactive/.