The Mary Lou Fulton Teachers College at Arizona State University has been awarded four major grants from the Department of Education to expand on faculty and researchers' success in meeting the learning and access needs of students across Arizona. 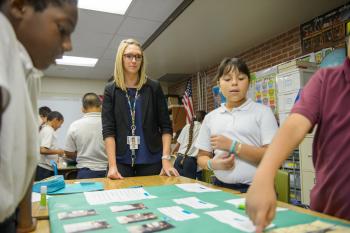 “These projects underscore not only the brilliance, but the passion of our educational researchers who won these competitively awarded grants in a concerted effort to move our mission forward,” said Koerner. “The entire college is focused on our goal of enabling all students to reach their potential, regardless of age, nationality or socioeconomic status."

Titled “Integrating STEM, Literacy, and Language to Prepare All Teachers to Teach ELLs,” the cross-disciplinary project calls for redesigning college math and science content courses to promote language and literacy development skills that future teachers can apply immediately in classrooms.

“This is not just for a special group of education majors,” explains Pamela Harris, assistant division director for teacher preparation at the college and lead author of the grant. “This is, instead, taking our elementary education majors and training all of them on how to use STEM (science, technology, engineering and math) content to successfully teach ELLs.

“The beauty of this project is that it will help all preK-8 students, even if they are not English Language Learners, because any student who struggles to read will benefit from some of the same strategies," she adds.

The project is on track to become a national model for boosting ELL learning outcomes.

“There is a lot of excitement around this grant,” said Jeanne Wilcox, professor and associate dean of research for Teachers College. “It supports ASU’s reputation for higher education innovation by allowing us to pilot a competency-based college education where students develop critical thinking and problem solving abilities needed in today’s workplace.”

The signature innovation includes a curriculum redesign, asking interdisciplinary faculty members across the university to collaborate in offering projects that are mapped to competencies students are expected to master. This allows students – many of them the first in their family to attend college – to achieve learning outcomes that meet requirements for multiple courses within a single project.

In addition, ASU and the Phoenix Union High School District are collaborating to implement an academic program that gives high school seniors a head start on college. The partnership will offer seniors and their parents support networks for academic advising, financial planning and transitioning to the ASU campus the student plans to attend.

“We want to begin to close the degree attainment gap for students from low-income backgrounds when compared to their more advantaged peers,” Wilcox said.

Fifteen American Indian students from Eastern Arizona College majoring in early childhood education will transition from the community college into ASU’s undergraduate degree program to spend their junior and senior years in San Carlos, Arizona, where they will complete their ASU coursework, junior-year practicum and senior-year iTeachAZ residency assisted by an on-site coordinator.

The ASU education graduates will become dual-certified for early childhood and special education teaching, and will continue to receive on-site support in their first year of teaching.

“I feel as though there are 15 people out there who may not know how we are going to change their lives forever,” said Cory Hansen, Teachers College interim director of teacher preparation and associate professor. “And the impact on the children and their families in San Carlos is going to be amazing.”

Finally, a three-year grant for $550,000 will underwrite a longitudinal evaluation of the college’s teacher preparation program and senior-year residency known as iTeachAZ. The award enables the college to examine three significant areas: the effectiveness of iTeachAZ on college graduation rates; the contribution of previous iTeachAZ reforms to teacher preparedness; and the impact of iTeachAZ-trained teachers on the academic achievement of their students.

The new grant also follows the progress of all iTeachAZ graduates, not just a subgroup, increasing the number of participants from 2,000 to more than 3,000 with varying levels of iTeachAZ experience. In addition, it includes data-sharing with both the Arizona Department of Education and the college’s 30 school district partners to gain timely information about iTeachAZ graduates.

If there’s a place that can be called America’s summer mecca for communal dialogue on religion, politics, culture, science, technology, economics and other pillars of civilization, it’s the Chautauqua Institution in New York State. 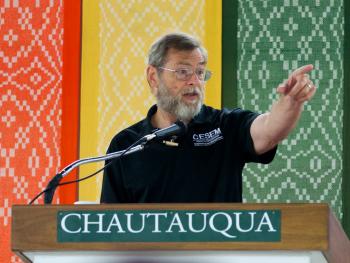 Over the course of nine weeks each June through August, the not-for-profit, 750-acre education center – founded in 1874 beside scenic Chautauqua Lake – typically draws more than 100,000 visitors.

Some come for summer school courses in writing and the arts, recreation on the lake or the diverse performance arts offerings in a 6,000-seat amphitheater. But most visitors come for the series of lectures and forums that explore big-picture questions about modern life and society’s pressing issues.

Arizona State University has had a growing voice at Chautauqua in the last several years. Through ASU’s Lincoln Center for Applied Ethics in the College of Liberal Arts and Sciences, faculty members have joined experts in myriad fields from around the world as headliners for Chautauqua public lectures and forums.

“You get educated and intellectually engaged people who want to dig deep into the issues. So you have very challenging and very fun audiences,” said Brad Allenby.

He has participated in Chautauqua’s summer events seven of the last eight years and expects to expand his role in the future.

“It is a great way for ASU, and ASU engineering, to get its brand out in front of big groups of people who are community leaders across the country,” he said.

Allenby has lectured on the social and ethical implications of the development and use of emerging technologies – particularly those employed in national security and military defense operations – and on the ongoing co-evolution of humans and their technologies that is giving rise to the “digital self.”

This past summer he joined other Lincoln Center colleagues in presenting a series of talks titled “The Ethics of Privacy,” focusing on the erosion of individual privacy driven by the capabilities of today’s ubiquitous technologies.

Chautauqua Institution leaders are planning to broaden the involvement of ASU Lincoln Center professors, Allenby said. For him, that likely will mean presenting a featured lecture and leading a week of classes based on his expertise in sustainable engineering and earth systems engineering and management.

“It would be a rare opportunity to delve into the integration of engineering, public policy and law that I think ASU engineers and other Lincoln professors can bring to a discussion of current social, environmental and technological challenges,” he said.

Amy Landis, an associate professor in the School of Sustainable Engineering and the Built Environment and a Lincoln Fellow of Sustainable Development and Ethics, wants to return to Chautauqua after her first stint as a lecturer there in 2013.

She spoke about issues of ethics and corporate and government responsibility related to the sustainability movement.

Landis focused on the question “What does green really mean?” and discussed the issue of “greenwashing,” in which business interests and other organizations make overstated or inaccurate claims about the environmentally positive impacts of their products and practices.

“It gave me a chance to open a dialogue in a venue that is very different than the ones I usually present in,” she said. “You feel like you can help get people outside of academia and industry to start thinking about these issues. That’s a good feeling.”

Landis and other Lincoln Center professors and fellows are sharing their experiences of the Chautauqua dialogues with students in Arizona.

They are also slated to participate in this year’s Lincoln Center symposium on Nov. 17, titled “Should We Care About Privacy?” exploring questions of ethics related to privacy rights that Lincoln professors examined in the Chautauqua lecture series they led this summer. About 500 high school and ASU students are expected to take part in large group discussions and breakout interactions of smaller groups.

During the recent Chautauqua summer season,  Allenby was joined in leading dialogues and classes for the special “Ethics of Privacy” series by Jason Robert, the Lincoln Center director and Dean’s Distinguished Professor in ASU’s School of Life Sciences, and by other Lincoln professors: Clark Miller, associate director of the ASU Consortium for Science, Policy and Outcomes and associate professor in the School of Politics and Global Studies; Joel Garreau, a research professor in ASU’s Sandra Day O’Connor College of Law; and Adriana Sanford, a clinical associate professor of law and international management at the W. P. Carey School of Business.

Together they covered privacy and ethics issues related to health care, national security, technology, love and money. Some of the same topics will also be covered in the fall symposium for Arizona students.

The Lincoln Center is also co-sponsoring an Arizona high school essay contest this fall. More than 2,000 students from 20 high schools are expected to submit essays to be evaluated by Lincoln professors.

Essays will focus on the theme of the November symposium on ethics and personal privacy. The top four essays from students in each school will receive financial awards. Four statewide winners will be chosen from among the writers of those winning essays.

David and Joan Lincoln, who founded ASU’s Lincoln Center in 1998, began funding Chautauqua’s annual ethics-themed week in 1997. By 2002, the Lincoln Center had established a long-term collaborative relationship with the Chautauqua Institution.

David Lincoln is a long-time Chautauqua community member and supporter of the institution. Kathryn “Katie” Lincoln – David and Joan Lincoln’s daughter – has served on the boards of the Chautauqua Institution and the Chautauqua Foundation.

Participation in the Chautauqua Institution summer programs and the fall symposium in Arizona “are ways the Lincoln family and the Lincoln Center reach out into the community and classrooms to inspire ideas and conversations about applied ethics in our lives,” Katie Lincoln said.

From the perspective of his professional interests, Allenby sees collaborative endeavors between engineers and institutions such as Chautauqua and the Lincoln Center as increasingly important.

“Given the ever larger role of technology in society, it’s critical that the public better understand engineered systems, and that engineers better understand the public’s interests and concerns,” he said. “Chautauqua is giving us an opportunity to push the dialogue about all of this in a productive direction.”