A New York Times story about a group of men with intellectual disabilities who worked in servitude for decades has won top honors in the 2014 Katherine Schneider Journalism Award for Excellence in Reporting on Disability.

The second-place award went to the Anchorage Daily News. Judges also awarded an honorable mention to the Kansas City Star, as well as to a student-created deaf and hearing newscast at Arizona State University. 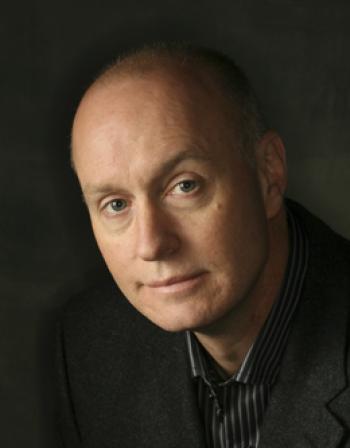 The contest, the only one devoted exclusively to disability reporting, is administered by the National Center on Disability and Journalism (NCDJ) at the Walter Cronkite School of Journalism and Mass Communication at Arizona State University. It was created in 2013 under a grant from Schneider, a retired clinical psychologist who has been blind since birth and who also supports the national Schneider Family Book Awards.

First place went to Dan Barry, Kassie Bracken and Nicole Bengiveno of The New York Times for “The ‘Boys’ in the Bunkhouse,” which describes in text, photos and video the lives of men who for 30 years worked in an Iowa turkey processing plant for almost no pay. The story raised questions about the federal law that permitted the men to be underpaid for doing the same work as their non-disabled colleagues, explained how regulators effectively sanctioned the exploitation, and detailed the squalid living conditions and mistreatment the men endured.

The New York Times team spent most of 2013 documenting the men’s experience, which was first revealed in stories in The Des Moines Register in 2009. Barry wrote and reported the winning story, utilizing court records and company documents and conducting the first interviews with the men. Bracken produced a half-hour documentary that accompanied the project, and Bengiveno was the lead photographer.

Barry will accept the award and a $5,000 cash prize on behalf of the Times’ team Nov. 3 at the Cronkite School, where he will also deliver a talk on his work to students, faculty and the public. The talk, part of the school’s Must See Mondays lecture series, will be held at 7 p.m. in the school’s First Amendment forum. It is free of charge and open to the public, and a sign language interpreter will be on hand.

Contest judges awarded second place to Kyle Hopkins and Marc Lester of the Anchorage Daily News for “State of Intoxication – Fetal Alcohol Spectrum Disorders.” The pair will share a $1,500 prize for the series, which provides an intimate portrait of children with Fetal Alcohol Spectrum Disorders. As common as autism, the disability is widely misunderstood and underdiagnosed in the U.S.

Eric Adler of The Kansas City Star was awarded honorable mention and $500 for “Denise’s Decision,” which chronicles the legal, medical and emotional ordeal of placing a loved one into long-term nursing care.

Finally, judges awarded special recognition and a $500 award to Peyton Gallovich and Melissa Yingst Huber of ASU for their startup enterprise, a television show that delivers the news for both deaf and hearing audiences. It is the first newscast to employ sign language, voices and captions to relay the news, allowing families to watch the news together. The bi-weekly show is available online and on stations in the Phoenix area.

Judges for the contest said they were impressed by the breadth and depth of the reporting on a range of disability issues but singled out Barry’s work for both the quality of the storytelling and the critical issues it unveiled.

Judge Jennifer LaFleur, senior editor for data journalism at the Center for Investigative Reporting, called the winning entry “a beautiful narrative that tells the horrific story of how the rights of more than two dozen disabled men were denied and how the system designed to protect them failed. ‘The ‘Boys’ in the Bunkhouse’ is an important contribution to disability journalism.”

Barry said, "We are humbled and honored by having been chosen as recipients of the 2014 Katherine Schneider Journalism Award for Excellence in Reporting on Disability. From the start we knew that the voices of the men of Atalissa needed to be heard, and we are just so fortunate that the men – and their many advocates – gave us their time and their stories. Thank you so much."

Judges reviewed 89 entries from journalists around the world. In addition to LaFleur, the judges were Jerry Ceppos, dean of the Manship School of Mass Communication at Louisiana State University and former vice president for news at Knight Ridder; Tony Coelho, former U.S. congressman and primary author and sponsor of the Americans with Disabilities Act;. Jennifer Longdon, a disability rights advocate and former chair of the Phoenix Mayor’s Commission on Disability Issues; and Tim McGuire, the Frank Russell Chair for the Business of Journalism at the Cronkite School and former editor and senior vice president of the Minneapolis Star Tribune newspaper.

In 2013, the inaugural Schneider award went to Ryan Gabrielson of California Watch, part of The Center for Investigative Reporting, for a series exposing the routine failure on the part of police to protect the developmentally disabled at California care institutions.

The contest seeks to recognize journalism that sets a new and higher standard for reporting on disability issues and people with disabilities, said Kristin Gilger, associate dean of the Cronkite School and director of the NCDJ. “This year’s winners did that far beyond our expectations, and they did it by telling compelling human stories and by holding power accountable,” she said.

Schneider pointed out that millions of people have some form of disability, yet they are frequently under-covered by the media, or they are depicted in stereotypical ways. In establishing the contest, “I wanted to help highlight good stories, and I chose to work with the NCDJ and the Cronkite School because of their commitment to fair and accurate journalism that includes diversity,” she said.

About 60 middle school and high school students recently participated in two STEAM Machines (science, technology, engineering, arts and mathematics) camps on the Navajo reservation; one in To’hajiilee, near Albuquerque, New Mexico, and one in Shonto, Arizona.

The camps, featured in the Navajo Times newspaper, were organized by Shawn Jordan, an assistant professor of engineering education in the Ira A. Fulton Schools of Engineering at Arizona State University. 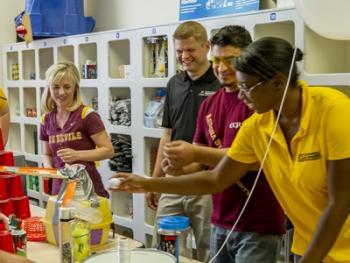 The STEAM Machines program challenges student teams to apply the engineering design process to build chain-reaction machines like those made famous by cartoonists Rube Goldberg and Heath Robinson. It teaches engineering skills, systems thinking and collaboration, and integrates the arts with the STEM fields of science, technology, engineering and math.

Jordan began working with schools in the Navajo Nation after judging the Navajo Nation Science Fair two years ago. His research involves context in design, informal engineering education, the "Maker Movement" and cross-disciplinarity. He led a team to two collegiate National Rube Goldberg Machine Contest championships, and has co-developed the STEAM Labs program over the past six years to teach middle- and high-school students science, technology, engineering, arts and math concepts through designing and building chain-reaction machines.

In addition to introducing students to engineering design and careers in the field, Jordan is also using data from the camps to help develop curriculum for Navajo Nation middle schools, which will be required to include engineering design in science classes beginning in fall 2015 as part of the Next Generation Science Standards for K-12.

The research is supported by a prestigious National Science Foundation Early CAREER Award to explore the intersection of Navajo culture and engineering design. It is a continuation of work started on the Navajo Nation under a Woodside Sustained Community Service Award in 2012.

“We’re looking at the best ways to teach engineering design in a way that has cultural context,” Jordan said. “It’s still very early in the data collection, but one thing we’re seeing is that these students are very in tune with the ‘making’ concept.

Jordan said the camps help incorporate a systematic engineering approach to the projects.

The next step for his research is interviewing professional Navajo engineers to learn how they view the similarities and differences between engineering design and Navajo culture.

Curriculum development will begin later this year and will be piloted next summer and fall before being implemented in 2015.