Did you know that crystals form the basis for the penetrating icy blue glare of car headlights and could be fundamental to the future in solar energy technology?

Crystals are at the heart of diodes. Not the kind you might find in quartz, formed naturally, but manufactured to form alloys, such as indium gallium nitride or InGaN. This alloy forms the light emitting region of LEDs, for illumination in the visible range, and of laser diodes (LDs), in the blue-UV range. 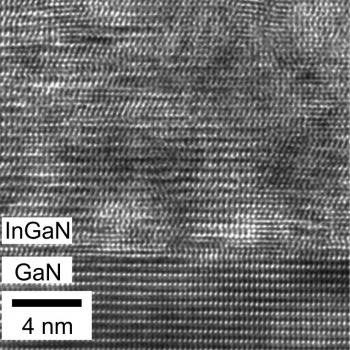 Research into making better crystals with high crystalline quality, light emission efficiency and luminosity is also at the heart of studies being done at Arizona State University by research scientist Alec Fischer and doctoral candidate Yong Wei in professor Fernando Ponce’s group in the Department of Physics.

In an article recently published in the journal Applied Physics Letters, the ASU group, in collaboration with a scientific team led by professor Alan Doolittle at the Georgia Institute of Technology, has just revealed the fundamental aspect of a new approach to growing InGaN crystals for diodes, which promises to move photovoltaic solar cell technology toward record-breaking efficiencies.

The InGaN crystals are grown as layers in a sandwich-like arrangement on sapphire substrates. Typically, researchers have found that the atomic separation of the layers varies; a condition that can lead to high levels of strain, breakdowns in growth and fluctuations in the alloy’s chemical composition.

“Being able to ease the strain and increase the uniformity in the composition of InGaN is very desirable,” says Ponce, “but difficult to achieve. Growth of these layers is similar to trying to smoothly fit together two honeycombs with different cell sizes, where size difference disrupts a periodic arrangement of the cells.”

As outlined in their publication, the authors developed an approach where pulses of molecules were introduced to achieve the desired alloy composition. The method, developed by Doolittle, is called metal-modulated epitaxy. “This technique allows an atomic, layer-by-layer growth of the material,” says Ponce.

Analysis of the atomic arrangement and the luminosity at the nanoscale level was performed by Fischer, the lead author of the study, and Wei. Their results showed that the films grown with the epitaxy technique had almost ideal characteristics and revealed that the unexpected results came from the strain relaxation at the first atomic layer of crystal growth.

“Doolittle’s group was able to assemble a final crystal that is more uniform and whose lattice structures match up … resulting in a film that resembles a perfect crystal,” says Ponce. “The luminosity was also like that of a perfect crystal. Something that no one in our field thought was possible.”

The ASU and Georgia Tech team’s elimination of these two seemingly insurmountable defects (non-uniform composition and mismatched lattice alignment) ultimately means that LEDs and solar photovoltaic products can now be developed that have much higher, efficient performance.

“While we are still a ways off from record-setting solar cells, this breakthrough could have immediate and lasting impact on light emitting devices and could potentially make the second most abundant semiconductor family, III-Nitrides, a real player in the solar cell field,” says Doolittle. Doolittle’s team at Georgia Tech's School of Electrical and Computer Engineering also included Michael Moseley and Brendan Gunning. A patent is pending for the new technology.

The collaboration was made possible by ASU’s Engineering Research Center for Quantum Energy and Sustainable Solar Technologies funded by the National Science Foundation and U.S. Department of Energy. The center, which brought the two research groups together, is directed by ASU professor Christiana Honsberg of the Ira A. Fulton Schools of Engineering. Designed to increase photovoltaic electricity and help create devices that are scalable to commercial production, the center has built partnerships with leading solar energy companies and fueled collaborations between many of the notable universities in the U.S., Asia, Europe and Australia. The center also serves as a platform for educational opportunities for students, including new college courses, partnerships with local elementary schools and public engagement events to raise awareness of the exciting challenges of harnessing the sun to power our world.

The ASU Art Museum is pleased to announce the arrival of visiting international artists Emilio Fantin and Giancarlo Norese. The artists are part of Lu Cafausu, an Italian collaborative art project by Emilio Fantin, Luigi Negro, Giancarlo Norese, Cesare Pietroiusti and Luigi Presicce.The public is encouraged to attend “Celebration of the Living (who reflect upon death), 4th edition,” a once-in-...

The public is encouraged to attend “Celebration of the Living (who reflect upon death), 4th edition,” a once-in-a-lifetime opportunity to honor loved ones who have passed away and re-envision the past, present and future by walking through the streets of downtown Phoenix. This is the fourth annual occurrence of this project and the first time that it is being held in the United States. The free event is a reconsideration of Día de los Muertos (Day of the Dead) traditions through multi-cultural lenses.

The procession, to be led by the Bad Cactus Brass Band, will kick off on Saturday, Nov. 2, 2013 with a pre-procession reception beginning at 3:30 p.m., at the ASU Art Museum International Artist Residency Program at Combine Studios, 821 N. Third St., in downtown Phoenix. The procession starts promptly at 4:30 p.m. and will conclude at Saint Mary’s Basilica with a choir performance. The procession also connects at its conclusion with the Celebración Artística de las Américas (CALA) Alliance Festival at the intersection of First and Adams streets.

The event is produced by the artists and the ASU Art Museum, continuing a tradition of artist-led projects that includes “Feast on the Street” and the Desert Initiative.

– Chicago artist Deborah Boardman will investigate traces from the past at the intersection of Third and Roosevelt streets
– One of the first public opportunities to view the newly restored DeSoto Building, at the intersection of Central Avenue and Roosevelt Street
– Original choreography and music interpreting a classic element of Kurosawa’s Dreams.
– Invited guests readers Merced Maldonado from Guadalupe, Ariz.; Canadian Shawn Van Sluys from the Musagetes Foundation, Arizona artist Marie Navarre and author Kristina Lee Podesva, from San Francisco, Calif., will read short passages from diverse cultural traditions and literature reflecting upon death

Learn more about Lu Cafausu at lucafausu.tk and view additional details about the event at facebook.com/events/1457056714520021/

The ASU Art Museum, named “the single most impressive venue for contemporary art in Arizona” by Art in America, is part of the Herberger Institute for Design and the Arts at Arizona State University. The museum is located on the southeast corner of Mill Avenue and 10th Street in Tempe and admission is free. Hours are 11 a.m. – 8 p.m. on Tuesdays (during the academic year), 11 a.m. – 5 p.m. Wednesday through Saturday and closed on Sundays and Mondays. Public hours for the International Artist Residency Gallery are Tuesday through Friday from 1–5 p.m. and by appointment. To learn more about the museum, call 480.965.2787or visit asuartmuseum.asu.edu or asuartmuseum.wordpress.com.