Arizona State University announced today that it has established the McCain Institute for International Leadership.

The new institute is initially supported by a $9 million gift from the McCain Institute Foundation, a charitable trust funded by Arizona Senator John McCain. Arizona State University will build the nonpartisan and nonprofit education and research center, based in Washington, D.C., and with a physical presence in Tempe. Full establishment of the institute is planned for early 2013. 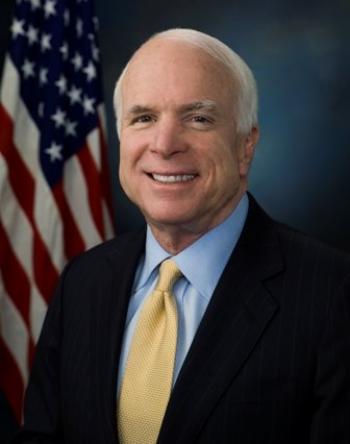 Already deep in the planning stages, the McCain Institute for International Leadership will focus on promoting character-driven leadership, as well as research and decision-making in the areas of humanitarian work, human rights and national security. It also will seek to promote rigorous debate, in the best American tradition of open inquiry, spirited discussion and practical action.

The myriad challenges and opportunities facing America and the world – including humanitarian crises and economic competition; democratic uprisings in the Middle East and cartel-driven violence and drug-trade along the U.S.-Mexico border; a rising China and global competition for resources – all demonstrate the continuing need for character-driven leadership, and rigorous analysis and decision-making. Through its policy research, events, fellows programs and other activities, the institute aims to inform, convene and assist policymakers, and to train future leaders from the United States and abroad.

“The charge of the McCain Institute for International Leadership fits in perfectly with Arizona State University’s core mission of having a significant positive impact on the larger community, and we are grateful to Senator McCain for his support of this important university endeavor,” said ASU President Michael Crow. “It will be guided by the values that have animated the career of Senator McCain: a commitment to sustaining America’s global leadership role; promoting freedom, democracy and human rights; as well as maintaining a strong, smart national defense.”

As a university that has pioneered a new model for an American research university, ASU brings substantial capacities to the table unmatched by traditional Washington think tanks. The university’s renowned faculty, its numerous schools and centers, and its unique “Decision Theater” capability offer a scholarly resource base that can help develop recommendations for improved decision-making.

The McCain Institute’s Washington location also offers new opportunities for ASU, including possibilities for student internships, research fellowships, and eventually a “Washington Semester” for ASU students. The institute will contribute to Arizona State University’s critical thinking and research missions by expanding its profile and access to policymaking in Washington, D.C.

Kurt Volker, former U.S. Ambassador to NATO, has been named executive director of the institute. Until recently, Volker served as senior fellow and managing director of the Center on Transatlantic Relations at John Hopkins University’s School of Advanced International Studies (SAIS). He also serves as a senior advisor at the Atlantic Council of the United States and is a member of its Strategic Advisory Group.

“The McCain Institute has a real opportunity to fill some gaps in Washington – first, by building future international leadership through a fellows program, and second, by engaging directly with senior decision-makers in developing, analyzing, testing and promoting the implementation of innovative policies,” Volker said.

Senator Mark Udall (D-Colo.) said he is “pleased that Senator McCain and Arizona State University are joining forces to create the McCain Institute. ... When I first came to the Senate in 2009, John befriended me, just as my father had befriended him years ago. We have worked together in the same nonpartisan approach that the McCain Institute will bring to international affairs – one based on shared values and common interests, not ideology.”

“Washington is not a town short of ideas, it is a town short of leadership,” said Senator Lindsey Graham (R-S.C.). “Policy proposals without leadership and values behind them, or people who are courageous enough to fight for them, will not stand up to the international challenges we face. I believe that the McCain Institute will be a center of gravity, a meeting place where we can robustly debate the great issues of our time and come away with a sense of purpose and a passion for character-driven leadership.”

At this stage, the institute is focusing on three early tasks:

• launching initial work to design the fellows program, and to engage with policymakers and partners to strengthen policies against trafficking in persons

The McCain Institute’s “Cornerstone Meeting,” that took place April 27-29, 2012, in Sedona, Ariz., brought together leading policymakers such as CIA Director David Petraeus and Senators Lindsey Graham (R-S.C.), Sheldon Whitehouse (D-R.I.), Kelly Ayotte (R-N.H.) and Jon Kyl (R-Ariz.) to discuss the central issues facing our world. The Cornerstone Meeting helped to sharpen the McCain Institute’s vision as a unique institution in Washington and to build lasting commitment from a wide community of supporters.

• Identify and train new national security leaders, both American and foreign, in public service and private enterprise, as well as military spheres. This includes establishing an internship program for undergraduate and graduate students, a McCain Leadership Fellows Program, and a class of Next Generation McCain Fellows composed of rising national security professionals.

• Play a unique role in a crowded intellectual space by serving as Washington’s preeminent “decision tank.” This includes sponsoring the Sedona Forum, an international gathering of top government officials, private sector leaders and issues experts in Sedona, Ariz., focused on the nation’s and the world’s most pressing issues, as well as the McCain Debates, a speaking series in Washington that provides an arena for experts and policy makers to debate key issues.

• Promote and preserve the McCain family spirit of character-driven leadership and national service, including hosting the McCain family archives. This includes partnering with foreign and domestic organizations to convene discussion on issues of regional and global importance, as well as hosting an electronic document repository to serve as a center of research and information for historians, academics, students and others.

Twenty-five years ago, graduate students in ASU's brand-new MFA in creative writing program had an idea: why not start a literary magazine?

Twenty-five years ago, graduate students in ASU’s brand-new MFA in creative writing program had an idea: why not start a literary magazine?

The students needed funds, of course, so they went to the English Department, where creative writing was housed, to ask. No extra money was available, so the students turned to Student Media, home of the State Press. 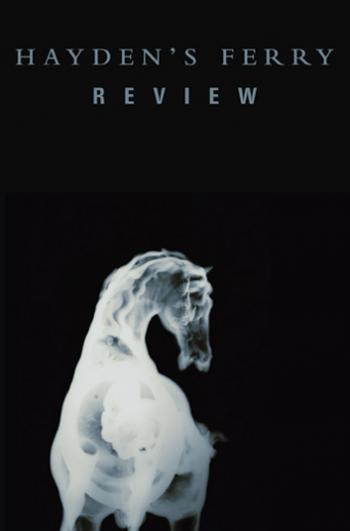 “Bruce Itule and I jumped on it,” recalled Salima Keegan. “Bruce was very enthusiastic and Student Media was doing well, so he funded it for the first year and I volunteered my time.”

Itule was then director of Student Media, and Keegan was his assistant. After the first issue, Keegan began writing grant proposals and raising funds to put the magazine on a sound financial footing. She served as managing editor for the next 20 years.

Now, Hayden’s Ferry Review is celebrating its 25th anniversary with its record 300-page 50th issue, themed of “Regarding Artifacts.” Beth Staples is the managing editor, and hundreds of writers and artists have seen their work in print.

Plus, numerous students have had the opportunity to serve as magazine editors and learn more about what sets good writing apart from bad.

For the 50th issue, the editors put out the following call for “artifact” submissions

“Art is, by its nature, a record. Literature, photographs, paintings, music, all these seek to catalogue the world just as they seek to elevate and transform it. A piece of art is also then, by its nature, an artifact: an object with unique meaning both within its context and apart from it.

“For our 50th issue, we’re interested in investigating how fragments and relics from our history help us to shape our current state of being. What happens when you wrest an object from its homeland (in time, place, state of mind)? Why do we trust remnants of the past as distinctively truthful, and how do we inevitably misunderstand them?

“Consider that work banned in one country develops a new set of meaning in other places. Consider how artifacts shape the identities of people, nations, cultures. Consider the lives of fraudulent artifacts, objects that create invented histories and narratives.”

The cover art for the 50th issue is a photo titled “History’s Shadow GM3” by David Maisel, from his series of re-photographed X-rays of sculpture and artifacts from antiquity.

The call for “artifacts” yielded a wide variety of submissions, including banned photographs from Ethiopia; an interview with author David Shields, who edited, with Matthew Vollmer, a book title “Fakes: An Anthology of Pseudo-Interviews, Faux-Lectures, Quasi-Letters and ‘Found’ Texts”; photos of religious relics; part of a novel by Baalu Girma, translated for the first time from Ethiopian into English; and “artifacts” from the editors’ favorite writers, such as notebook entries, poem drafts and playful writing, that are “reminders both of the inspiration behind – and the work of – writing.”

As managing editor, Staples selects MFA student editors who help with solicitation and choose works and photos. “They do two issues, then I choose new ones,” she said.

Staples said her job is “a dream come true” for her. “I really like working with writers and artists. I’ve learned about what makes writing good, and I’ve learned a lot about stuff I didn’t want to learn about. Being a managing editor requires me to wear many hats, some of which I love – reading submissions, working with authors, and some of which I’ve had to teach myself to do even if they aren’t fulfilling in quite the same way – managing subscriptions, writing contracts, finding new ways to market and sell copies.”

Staples herself holds an MFA in creative writing from ASU and has a novel in progress. She also writes short stories and teaches at ASU and Mesa Community College.

Though university budgets have been tight in the last few years, Hayden’s Ferry Review has managed to continue, albeit with some unwanted changes.

“We have had to stop paying contributors and raise the subscription rate,” Staples said. But the magazine, named by the first editors in honor of Tempe’s first name, Hayden’s Ferry, continues to attract submissions and publish magazines of 180 to 220 pages twice a year.

Subscriptions are $25 per year, for two issues. Single copies are $13 (which includes postage). For more information about submitting work or subscribing, go to www.haydensferryreview.org or send an e-mail to HFR@asu.edu.

Hayden’s Ferry Review is published by the Virginia G. Piper Center for Creative Writing at ASU.

Hayden's Ferry Review has won numerous awards in the past few years, including the following: