Arizona State University’s Biodesign Institute has made an economic impact of $1.5 billion in its first decade of operation, according to a study by the Seidman Research Institute at ASU’s W. P. Carey School of Business.

The annual direct economic impact is the highest for any single bioscience research institute in the state, according to the report. Annually, Biodesign Institute operations have contributed an average of $135.5 million in direct impacts on Arizona’s economy, created and supported more than 1,600 high-paying jobs and generated $10.5 million in state and local tax revenues. 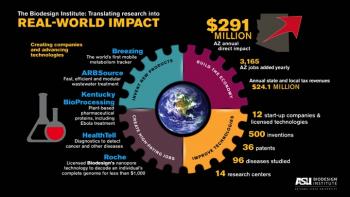 “This study demonstrates that we are making good on our commitment to provide a significant return on investment to our state,” said ASU President Michael Crow. “We’re pleased with the numbers, but ultimately, we measure Biodesign’s success by the impact our world-class researchers are having on improving the quality of life here and across the world – as well as ensuring future success in the training of our next generation of scientists.”

The real world impact of Biodesign was dramatically underscored by contributions from Charles Arntzen, an ASU Regents' Professor and founding director of the Biodesign Institute, who had a hand in the development of the first experimental treatment in people, in a desperate effort to fight the Ebola virus.
The treatment, called ZMapp, had its roots from a decade-long collaboration between Biodesign and Mapp Biopharmaceuticals, and recently made international headlines when, in an unprecedented move, it was used to treat two aid workers, Kent Brantly and Nancy Writebol, who became infected during the current Ebola outbreak in Africa.  While the early results are promising, not everyone given the ZMapp treatment has survived. Arntzen cautions that it is much too early to talk of Ebola cures, since the drug had never been tested in humans before, and more scientific rigor and data are needed to ultimately prove the efficacy of ZMapp.

This is just one of the scores of major initiatives currently undertaken by researchers at the Biodesign Institute. Among its top research achievements are new technologies in health care, security and sustainability, including:

• vaccines and therapeutics to fight a wide spectrum of infectious diseases

“With more than $400 million in research dollars, the ASU Biodesign Institute builds excitement about positioning our region for future economic growth,” said Broome.

“As we celebrate the achievements and the remarkable impact and success that our faculty and talented staff have had, it’s important to note that the future will be even brighter for Biodesign,” said Raymond DuBois, executive director of the Biodesign Institute.

“With continued state support, we plan on significantly expanding the research infrastructure of Biodesign to attract top scientific talent, develop the high paying jobs and highly skilled workforce needed for the bioscience sector, and diversify our research portfolio to have an even greater societal impact.”

Biodesign has been a key component in ASU’s rapid expansion and ascension as a world-class research university under President Michael Crow's vision of A New American University. This investment has nearly tripled ASU’s research funding in the past decade, to more than $400 million in annual expenditures. Now, the goal is to reach $700 million by 2020.

“The Biodesign Institute is a key contributor to the rapid growth of ASU’s research enterprise, which now ranks 15th in the nation among institutions without a medical school,” said Sethuraman “Panch” Panchanathan, senior vice president for Knowledge Enterprise Development at ASU. “Biodesign research teams are rapidly advancing discoveries and technologies that have a significant impact on human health, the environment and national security."

The expansion of research infrastructure is critical to Biodesign meeting its future goals, including:

• expanding research infrastructure with the addition of at least 150,000 sq. ft. of new space

• expanding its number of clinical and industrial partnerships

• expanding Biodesign’s research and innovation concept statewide and internationally through collaborations with scientists in Europe, Mexico and China

If this vision is fully realized, the coming decade’s economic forecast projects an even greater return on investment. The total cumulative projected impact of the Biodesign Institute on the economy of Arizona for fiscal years 2014 through 2023 is forecasted to almost double, with an estimated $2.9 billion in gross state product, 31,645 worker-years, total real disposable personal income of $1.6 billion, and $24.1 million in state and local tax revenues.

The projected average annual impacts during the next decade (fiscal years 2014-2023) will be even higher, estimated to contribute $291 million annually to Arizona’s economy, or $3 billion in total. The Biodesign Institute’s activities will provide, directly and indirectly, an average of 3,165 jobs in Arizona each year. The wages and salaries and other income produced by the economic activity of the Institute will provide an average of $160 million per year in additional real disposable personal income to area residents and $24.1 million per year in incremental revenues to state and local governments in Arizona. Attracting new scientific talent will enhance ASU’s ability to compete for millions of dollars in annual research funding, most of which is spent directly in the Arizona economy. Recently, the Institute won Arizona’s Excellence in Economic Development award for its innovative contributions to the state’s economic growth.

Biodesign Institute scientists have disclosed more than 500 inventions since inception, resulting in more than 200 U.S. and international patent filings, 40 patents issued, and a dozen start-up ventures. In 2012, HealthTell Inc., a spinout company co-founded by Biodesign scientists Neal Woodbury and Stephen Albert Johnston focused on early disease detection, was selected as the Start-up of the Year at the 2012 Governor’s Celebration of Innovation.

Biodesign’s expansion will help steer the state Bioscience Roadmap’s overarching vision for Arizona – a young but rapidly growing state in the biosciences – to become a global competitor and national leader in select areas of the biosciences by 2025.

Researchers seek answers to the evolutionary advantage for stone-tipped spears and gain understanding into how social and memory skills may have developed in early human ancestors.

Attaching a stone tip onto a wooden spear shaft was a significant innovation for early modern humans living around 500,000 years ago. However, it was also a costly behavior in terms of time and effort to collect, prepare and assemble the spear.

Because stone tips break more frequently than wooden spears, they require more frequent replacement and upkeep, and the fragility of a broken point could necessitate multiple thrusts to an angry animal. So, why did early hunters begin to use stone-tipped spears? 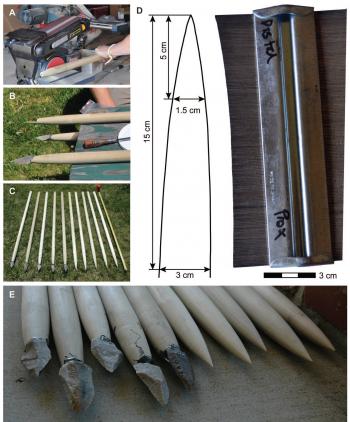 To learn if there was a “wounding” advantage between using a wooden spear or a stone-tipped spear, ASU postdoctoral researcher Jayne Wilkins, doctoral student Benjamin Schoville and coauthor Kyle Brown from the University of Cape Town, conducted controlled experiments using tipped and untipped spear replications, a calibrated crossbow and ballistics gelatin. The experiments looked at the size and shape of the “wound,” penetration depth and damage done by extraction of the spear.

Wilkins and Schoville are affiliated with the Institute of Human Origins, a research center of the ASU College of Liberal Arts and Sciences in the School of Human Evolution and Social Change.

Their experiments found that although tipped spears did not penetrate deeper than the untipped spears, as is commonly thought, the tipped spears create wider wound cavities. These wider wound cavities would have caused more debilitating tissue damage to internal organs of animals, making hunts more successful. This is one explanation for an evolutionary advantage for tipping a spear with a stone, an innovation that may have significantly impacted the evolution of human life-history.

"Putting a fragile stone tip on a spear is risky,” said Schoville, “but we show that there are serious rewards in terms of both the size and shape of the wound created that made this innovation extremely worthwhile during our evolution.”

The authors also posit that the manufacture of the stone-tipped spears may represent the origin of new cognitive and social development in our human ancestors. Working memory (the ability to hold attention to multiple tasks in order to collect, prepare and combine different kinds of raw materials into a weapon) and constructive memory (the ability to imagine and plan for future tasks) were mental capacities required for tipped-spear construction.

In addition, since a stone-tipped spear is a skill likely to have been learned by being passed from generation to generation through social or group learning, stone-tipped technology is evidence of the evolutionary impact of “cumulative culture.”

The flip side of this greater human cooperation is where groups and individuals are more likely to cooperate when others have very lethal weapons – a situation still in play today.

The study, “An Experimental Investigation of the Functional Hypothesis and Evolutionary Advantage of Stone-Tipped Spears,” will be published Aug. 27, 2014 in the open-access journal PLOS ONE, at http://dx.plos.org/10.1371/journal.pone.0104514.