The ASU Art Museum celebrates its season opening on Sept. 28-29 with the arrival of "Ant Farm Media Van v.08 [Time Capsule"] at the Ceramics Research Center and the opening of "Trajectory," the new exhibition by Portugese artist-in-residence Miguel Palma.

The festivities, free and open to the public, run from 6:30 to 9 p.m., Sept. 28-29 and include Movement Connections, a group which mixes parkour, martial arts, acrobatics and dance, who will perform using the museum building as its stage. 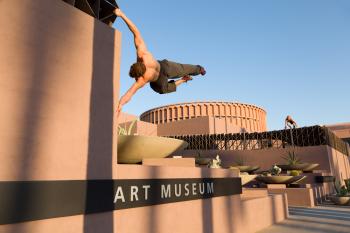 The premiere of "55: Music and Dance in Concrete," a project by composer, pianist and electronic musician Wayne Horvitz is scheduled for 7:30 p.m. each evening. An intricate performance featuring dance and video elements, "55: Music and Dance in Concrete" emphasizes the unique visual and acoustic elements specific to the museum, with site-specific choreography performed by dancers visiting from Japan.

The work’s electronic score is composed of fragments from 55 improvised and 55 composed pieces recorded in bunkers and a cistern on the former military base Fort Worden, the project’s initial site. The electronic score was recorded and composed during the summer of 2012 in preparation for the collaborative installation and performance with choreographer Yukio Suzuki and his KINGYO company, engineer and producer Tucker Martine and video artist Yohei Saito.

Food trucks will be available both nights of the season opening festivities.

The ASU Art Museum is located at 51 E. 10th Street, Tempe, Ariz., and the Ceramic Research Center is across the street at the northeast corner of 10th Street and Mill Avenue.

Can your eyes expose your sins? Does refraction apply to a person's soul? An ASU English professor explores a 13th century text uniting science and religion.

Imagine a stick partially submerged in a pool of water. It appears to be broken at the point where water meets air, but in fact it is in one piece. This optical illusion is called refraction: as light passes from one medium to another, it bends and changes speed based on each medium’s refractive index, causing the stick in water to appear bent.

Most people are familiar with the scientific definition of refraction. But have you ever considered it as a moral concept? Say there’s a man on the street digging through a dumpster. You might see him as being “broken.” But as refraction teaches us, things are not always as they appear. 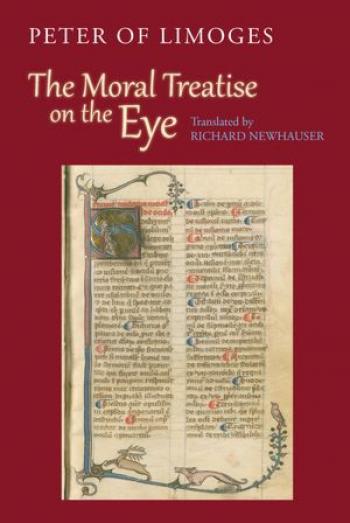 The idea that scientific principles might also have philosophical applications is explored in "The Moral Treatise on the Eye," a text written in the late 13th century by Peter of Limoges. "The Moral Treatise" is a compilation of short narratives, or exempla, meant to help preachers deliver sermons. Each chapter offers a piece of knowledge about the field of optics. Peter of Limoges first explains the concept scientifically, and then gives a moral or religious interpretation, like in the refraction example.

“Peter quotes Paul, saying that we see things in this world through a dark veil, but in the next life, you’ll see things as they really are,” says Richard Newhauser, an English professor in the College of Liberal Arts and Sciences at ASU. “In effect, what he’s saying is, in heaven there’s no reflection or refraction but only lines of direct sight.”

"The Moral Treatise on the Eye" combines scientific thought with concepts of moral theology. This blending of disciplines is part of what appealed to Newhauser, who recently published a translation of the text with extensive explanatory footnotes (PIMS, February 2012).

“Today, we don’t have a unifying discourse to speak of science and theology within the same framework. Peter does, and that made his text beckon to me. I found that absolutely fascinating,” Newhauser says.

The notion of going to church to learn about science might seem ludicrous today. But Peter of Limoges knew that in the Middle Ages, when people went to church, they wanted to learn something and be entertained. That’s why "The Moral Treatise" contained information on optics, together with short stories on that topic. The narratives are more accessible to the congregation than scientific jargon would be.

“It’s really high science for the time in which it was written. Not everybody dabbled in optics,” Newhauser says. But Peter saw the church as a place for ordinary people to learn about scientific findings that would have otherwise been confined to a university environment.

Peter of Limoges had many interests, but was well known as a scientist. And even in the 13th century, he had a thorough understanding of basic optics. He knew that rays of light come through the pupil, that images start out upside down because the optic nerves are crossed, and that those images are flipped over when the nerves connect to the brain. However, "The Moral Treatise" also contains folklore.

“There are places where he would repeat what we consider fairy tales, like ‘If a man is murdered and his murderer walks by him, the wounds of the dead man will start to bleed again.’ That’s very poetic, but hardly accurate,” Newhauser says. But these short narratives keep the text interesting, and after all, teaching science was only part of Peter’s objective. He also wanted to present optics as a way to organize religious ideas.

Newhauser says he first became interested in "The Moral Treatise" for its chapter on how eyes represent the seven deadly sins.

“Proud people are said to have haughty eyes, lustful people have carnal eyes, and so on,” Newhauser says. In making these associations, Peter is compelling readers to examine the idea of perspective. Perspective as an artistic concept was hugely important in the development of Renaissance art, but "The Moral Treatise" represents a much earlier example of perspective in science and theology.

“The principle that allows all of these disciplines – theology, narrative, science and art history – to speak the same language, is that what you see depends on where you are when you see it, what relationship you have to the object being seen,” Newhauser explains. “If you’re not close to God, you’re not going to see God right. That’s the metaphorical crossover.”

Newhauser’s translation of "The Moral Treatise on the Eye" will be featured at a conference on ethics, optics and art in the 13th and 14th centuries at the Sterling and Francine Clark Art Institute in Williamstown, Mass., in September 2013. Before Newhauser undertook the translation, very few medieval scholars knew anything about Peter of Limoges or his book. This is surprising, given the popularity and importance of the "The Moral Treatise" at the time it was written.

“There are about 220 extant copies in manuscript of this text, and that’s really an enormous number,” Newhauser says. Today, a printing of 220 would seem miniscule, but for the Middle Ages, when each copy was transcribed by hand, it’s remarkable.

Even if "The Moral Treatise" had not been reproduced so many times, its significance as a text that unites science and theology would remain.

“'The Moral Treatise on the Eye' accomplishes a kind of cultural work that no other text of its time did,” Newhauser says, “and it does something really new and important for medieval studies. It’s performing an interesting service for the way we look at and think about the Middle Ages.”