Increasingly, archaeology is being used as a tool for addressing real-world challenges by providing insights into areas such as how humans and their environments impact one another, why and how populations migrate and how societies arise and evolve.

Where the discipline of archaeology should place its focus in the coming years is the crux of a National Science Foundation-funded effort spearheaded by Arizona State University archaeology professor Keith Kintigh. 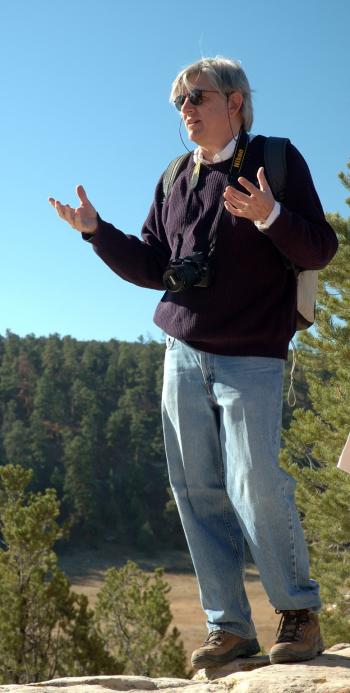 Kintigh helped lay out an intellectual agenda for archaeology that defines the field’s 25 major challenges. They were recently unveiled in the Proceedings of the National Academy of Sciences and American Antiquity.

The roots of this outcome date to a 2011 presentation Kintigh made to the Nation Science Foundation’s Directorate for Social, Behavioral and Economic Sciences Advisory Committee as a part of the their planning for new data and infrastructure activities.

Kintigh was awarded a grant to develop recommendations for investments in cyberinfrastructure that would enable transformative advances in the field of archaeology. The grant steering committee, led by Kintigh and including professor Ann Kinzig of the School of Life Sciences in the College of Liberal Arts and Sciences, immediately realized that in order to prioritize the proposed investments, it needed to identify the most important problems.

Part of the answer came from the team’s crowd-sourced endeavor to solicit challenges from professional archaeologists, internationally, in the academic, consulting and government sectors.

The committee members were then able to assemble a first-rate group of scholars to augment, vet and prioritize the crowd-sourced suggestions. The group developed the final challenges at a two-day, high-energy meeting at the Santa Fe Institute.

“Some people may be surprised to find that the big challenges are not about the earliest, the largest or the otherwise unique,” Kintigh says. “Instead, they have to do with understanding fundamental cultural processes and how human societies affect and are affected by their natural environments.”

Kintigh notes that the challenges are not exclusively archaeological, but are of interest to a broad range of scientists. Likewise, tackling them will often demand transdisciplinary efforts.

Of all fields, however, Kintigh believes that archaeology is uniquely positioned to look at processes that occur over centuries and to provide systematic data on a vast number of cultural sequences in a great diversity of environmental and cultural settings.

“Archaeology's long-term view is essential because we can examine problems that threatened ancient societies and see how they responded. We can also see how their solutions worked out in the short and the long run,” he states.

The themes of the grand challenges are Emergence, Communities and Complexity; Resilience, Persistence, Transformation and Collapse; Movement, Mobility and Migration; Cognition, Behavior and Identity; and Human-Environment Interactions.

Among the specific items are such timely issues as “How have human activities shaped Earth’s biological and physical systems, and when did humans become dominant drivers of these systems?” and “Why do market systems emerge, persist, evolve and, on occasion, fail?”

The grand challenges will demand new kinds of synthetic research that can draw on the results of many archaeological cases.

Explains Kintigh, “It seems to me the overarching question is how we actually effect this synthesis. I think we’ll be working that out as we try to address these problems over the next decade. We do know that it will require effective access to lots of data and an ability to meaningfully compare primary data that were collected using different recording schemes.”

He adds that the Digital Archaeological Record (tDAR), a digital repository for archaeological data and documents that was established here at ASU, will be part of the solution.

More than 10 years ago, ongoing research by School of Human Evolution and Social Change archaeology faculty pointed to the centrality of data integration and synthesis for answering the big questions. This recognition led to the development of tDAR, starting in 2006. This transdisciplinary effort was led by Kintigh and computer scientist Selçuk Candan in the School of Computing, Informatics and Decision Systems Engineering. Now, tDAR is a fully-operational digital repository.

Kintigh and his team are currently at work on a second report with recommendations for investments in cyberinfrastructure that can most effectively enable the investigation of the grand challenges.

Many of the new education programs are concentrated on ASU’s Polytechnic campus in Mesa and its West campus in northwest Phoenix, according to Connie Pangrazi, Teachers College assistant dean at the Poly campus. 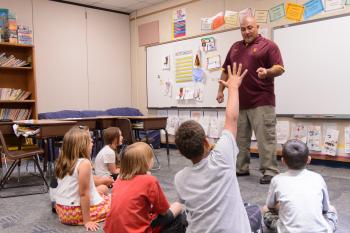 “We are launching two scholarship programs in fall 2014 to attract students to the Poly and West campuses,” Pangrazi said. “For students in Barrett, the Honors College, we will pay their $1,000/semester honors college program fee when they are enrolled at either campus. We also will offer a one-time Trailblazer Scholarship of at least $500 and up to $1,000 to any Teachers College student working toward teaching certification when they pay their deposit, register for new student orientation and sign up for housing at either the Poly or West campus.”

Additionally, Teachers College is targeting particularly high-achieving students with a proposed accelerated, tuition-saving program unveiled in fall 2014. The accelerated model allows students to earn a bachelor’s degree in elementary education and is designed to produce students ready to teach in three years, Pangrazi explained. Students will also participate in some differentiated learning experiences designed to increase their marketability.

“In their third year, the students in the accelerated model follow the same path as traditional four year education majors, getting a full year of classroom experience through an iTeachAZ student teaching residency,” she said. “As student teachers, they work with mentor teachers in local schools while completing ASU coursework at a local school site.

“An added benefit of the accelerated model is that it has the potential to lower tuition costs for students since they receive their bachelor’s degree in three years instead of four,” Pangrazi said.

Teachers College also plans to contribute to ASU’s consistent ranking as a top “Military Friendly School” by G.I. Jobs magazine. Teaming up with the Pat Tillman Veterans Center and College of Technology and Innovation, Teachers College is co-hosting a Veterans Open House from 4 to 7 p.m., Feb. 18, at the Polytechnic campus. The special event on the site of the former Williams Air Force Base will encourage vets to enroll in one of the college’s teaching programs. Also on-hand will be Troops to Teachers, a U.S. Department of Defense program that helps eligible military personnel begin a new career as teachers in public schools.

“This first-ever ASU event offers one-stop shopping for veterans wanting to pursue a teaching career,” said Steven Borden, director of the Pat Tillman Veterans Center and retired Navy Captain. “Working with ASU recruiters, we are casting a wide net for participants by contacting military bases, ROTC units and more than 150 city and community colleges nationwide to take advantage of this ‘second service’ opportunity.”

During the open house, interested veterans and their dependents can tour family and married housing on the Poly campus and talk with advisors about transcripts, admissions and financial aid. They also will be able to meet veterans who are Teachers College students, faculty and alumni. Also, veterans who apply for ASU admission that night or within 24 hours will have undergraduate application fees waived. Potential students will have access to on-site computers to submit their applications, and webinars will also allow off-site vets to participate in event activities.

For more information about opportunities for veterans in education, visit http://education.asu.edu/resources/veterans. For details about the event or to RSVP, please contact Connie Pangrazi at connie.pangrazi@asu.edu.

For veterans wanting to work in education, but outside a traditional school setting, Teachers College also offers up to 12 military course credits toward its educational studies degree. Typically, this program prepares ASU students to work with children, youths and adults as teachers in nonprofit or government organizations, private educational or recreational settings, or as educational entrepreneurs in children and youth-oriented fields. For details about the program, go to http://education.asu.edu/programs/view/bachelor-of-arts-in-educational-studies.

Finally, on-the-job teachers and administrators who want to advance their education will be able to enroll in district-embedded courses beginning in summer 2014. This new Teachers College program is tailored primarily to early childhood and gifted student educators who require special state certification. Teachers will enroll as graduate students and take their classes on-site via video-conferencing with ASU faculty at the Poly and West campuses.

“Currently, we are assessing school district needs and videoconferencing availability,” Pangrazi noted. “Once we have completed our surveys of teachers and administrators, we can announce where and when these classes will be available in the summer.”