ASU appreciates your continued support of the Sun Dollars program at the university. Sun Dollars has been offered as a form of payment attached to the ASU Sun Card for the past 15 years. The costs associated with processing Sun Dollar transactions have increased for our merchants in recent years, while participation in the program by our students and staff substantially has decreased. As a result, ASU will phase out the Sun Dollars program by the end of July 2012. Until that date, the program remains fully functional.

Sun Dollars patrons with current balances in their account may want to spend their remaining balance at places like the ASU Book Store, on food and beverages, and at local off-campus stores where Sun Dollars are accepted, between now and July 14, 2012.

• At midnight on July 14, 2012, vendors will no longer accept Sun   Dollars. However, a few on-campus merchants may continue to accept Sun Dollars through July 31, 2012, for things such as equipment rental, laundry and printing services for university conference attendees and summer students.

• Sun Dollars account holders who have a balance after July 31, 2012 will have the balance transferred to their ASU Student Account.

In partnership with MidFirst Bank, ASU students, faculty, staff, alumni, fans and friends will be offered special programs for personalized banking services. ASU community members now can choose the Pitchfork ID MasterCard Check Card, which combines ASU identification card features with check card functionality linked to a MidFirst Bank personal checking account. The basic Sun Card is still available to those who do not wish to open a MidFirst checking account and obtain a Pitchfork ID.

Both the Pitchfork ID card and the Sun Card are considered official forms of ASU ID for ASU at all locations.

ASU Sun Card holders are still provided discounts from local merchants through the Use It Here program. Discounts at local merchants continue to be offered to those who show their Sun Card, or the new Pitchfork ID card.

For more information and to manage your Sun Card account, visit http://cfo.asu.edu/cardservices-suncard-manage.

New data and projections point to a future fiscal and economic crisis for Arizona unless the state's Latino educational attainment gap is addressed in a concerted and sustained manner.

New data and projections point to a future fiscal and economic crisis for Arizona unless the state’s Latino educational attainment gap is addressed in a concerted and sustained manner, shows a report released by Morrison Institute for Public Policy.

"Dropped? Latino Education and Arizona’s Economic Future" is a follow-up to Morrison Institute’s 2001 landmark publication, "Five Shoes Waiting to Drop on Arizona’s Future." The new report narrows its focus to education, noting that little or no progress among Latinos has occurred – and, in fact, has gotten worse in key measurements – despite the warnings a decade ago and the need for a high-skilled workforce in today’s economy. 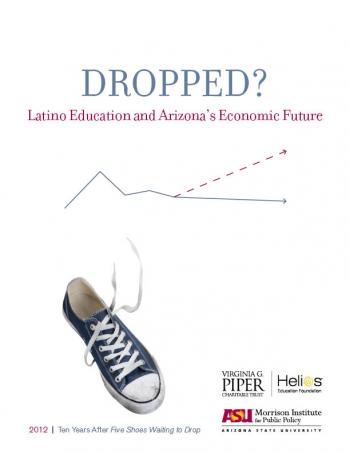 Among the presenters and panelists discussing the findings, projections and data was Steve Murdock, the former director of the U.S. Census Bureau. The Rice University professor noted how similar projections in Texas helped galvanize an understanding and commitment to close the Latino education gap in that state as part of an overall economic strategy.

“This report isn’t about ethnicity, but rather about economics, demographics and, in some respects, a failure a decade ago to deal with a critical education issue,” said Susan Clark-Johnson, executive director of Morrison Institute for Public Policy.

“Latinos eventually will comprise a majority of Arizonans and provide an increasingly larger share of the state’s leaders, workers and tax base. If we do not close the educational gap, all of Arizona will suffer the consequences. In truth, education in Arizona needs to be improved for all Arizonans. In an increasingly competitive global environment, our overall education achievement lags far behind that of too many countries,” she said.

Some key findings of the report note:

• In 1980, Latinos made up 16 percent of Arizona’s total population. Today, that number is 30 percent, as the state and nation continues to move toward a “majority-minority” populace.

• Latinos largely make up Arizona’s workforce of the future with the state already home to more Latinos under age 18 than Whites.

• Nearly 100 percent of Latino children under age five in Arizona are U.S. citizens, contrary to political rhetoric related to immigration.

• With the trend for lower average incomes and fewer jobs for low-skilled laborers, Arizona’s unemployment and poverty rates can be expected to worsen with a greater demand on state services and less revenue to pay for them.

• Projections show by 2030 the combined average income for Latinos and Whites in Arizona will drop to $32,423 (in 2010 dollars), down from its $39,667 comparable combined average, if income and education trends continue.

“We are not preparing most of our students adequately to handle the competitive challenges of a global economy; and we are particularly failing to tap the enormous potential of Arizona’s fastest-growing population group," the report states. "If Arizona does not deal with its current and increasingly significant educational attainment gap, the state faces a very real possibility of economic decline.”

Also included in the report, which was the result of a one-and-a-half-year project overseen by David Daugherty, director of research at Morrison Institute, are root causes of the Latino education gap and strategies to address the statewide problem.

The report is available at morrisoninstitute.asu.edu.