Arizona State University alumnus Joe Graham is unlocking the secrets behind the brain at the Blue Brain Project in Lausanne, Switzerland.

The Phoenix resident moved to Europe 2 1/2 years ago to begin working for the project that aims to design a full model of the human brain in 10 years. 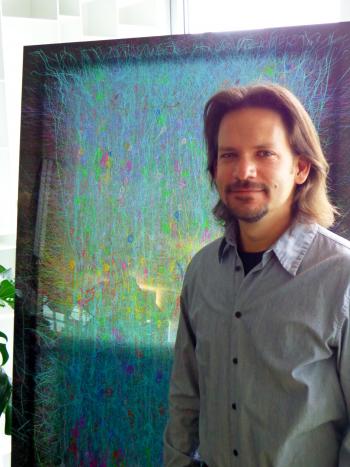 “The human brain is the most complex thing in the known universe. It allows us to do incredible things,” Graham said.

During graduate school at ASU, Graham became interested in motor neurons, the final pathway of motor control that allows the spinal cord and brain to coordinate movement. Graham worked on modeling simulated electrical behavior moving through the neurons and published a paper on his work that helped explain the differences in motor neuron behavior before and after spinal cord injuries.

Part of his research was dedicated to modeling the current flowing in and out of dendrites, the tree-like structures branching off of the cell body. Developing models of how they branch and designing software to reconstruct the dendrite branches created the potential to generate unlimited numbers of “virtual” motor neurons that are indistinguishable from real ones, he said.

Graham found the Blue Brain Project after earning his bachelor’s degree in bioengineering and his doctoral degree in neuroscience at ASU. The job description fit his skills perfectly since they basically described his doctoral project of generating virtual neurons.

“The Blue Brain Project has a need for many neuronal morphologies (the cells which make up the brain’s form and structure), but there is no way to reconstruct enough through experimentation to make a brain model,” Graham said. He worked on applying his work in motor neurons to brain neurons and generated these through modeling.

“The Blue Brain Project is a perfect fit for my skill set,” he said.

During the next decade, Blue Brain Project scientists will work to meet goals including modeling a mouse brain within five years and a full human brain model within the next 10 years.

“In mammals, the nervous system is very similar across species,” Graham said.

Creating a model of the human brain will allow neuroscientists to test theories through simulation that enable a much richer experience.

“You can only stick so many electrodes into a real brain. We can see what is going on in every single cell with simulations,” Graham said.

“These brain diseases are so large-scale that you need a simulation to see the larger changes between a disease state and regular state,” he said. New drugs can also be tested more efficiently with simulations to measure their effects.

“This could be a way to greatly decrease the time required to study new drugs for Parkinson’s and other brain diseases,” Graham said.

Supercomputers are a major cost consideration in the project since it costs thousands of dollars per day in power for a supercomputer to run a simulated rat brain, yet the human brain accomplishes astounding computations with “less power than a light bulb,” Graham said.

“We can improve computing by learning how the brain does it,” he said.

“The Blue Brain Project is the simulation core of that process. We’re sort of the middle of the wheel,” Graham said.

A fascination with the brain began in high school for Graham when he read books such as neuroscientist Oliver Sacks, “The Man Who Mistook His Wife for a Hat” that describes case studies of people with localized damage to the brain and how those effects are manifested. An uncle who suffered from schizophrenia and grandparents who had dementia also influenced his interest in the brain.

“Our brain is who we are. When something goes wrong, the effects are very profound,” he said. “Separate brain regions talk to each other. If you study the connections, you can learn more about the brain.”

Mansperger was a player on the 1956 and 1957 Sun Devil teams and later served as an assistant coach in both 1958 and 1962 for Head Coach Frank Kush. His coaching specialty was the interior line.

Dick, as he is called by his fellow coaches, returned to ASU in January of 1962, replacing Chuck Fairbanks who joined the staff at the University of Houston.

Mansperger played college football at Palo Verde Junior College in Blythe, Calif. (two years) and at ASU (two years). As a Sun Devil he played tackle on the Sun Devil teams of 1956 and 1957, years that saw the Maroon and Gold win 19 of 20 games.

From 1953-1956 Mansperger served in the Army with an airborne division, starting as a private and advancing through the ranks to lieutenant. After that, it was two years of football at ASU and a degree in radio and television speech in 1958. He served as a graduate assistant and helped coach the freshmen team at ASU in 1958.

He then became head football coach at Palo Verde Junior College for two years, compiling a sterling 14-3-2 record.  In 1961, he was an assistant coach at West Texas State.

Mansperger later served as an assistant football coach at UCLA (1964) and later as Director of Player Personnel with both the Seattle Seahawks and the Dallas Cowboys.