González is a graduate of the Master of Fine Arts program in creative writing in ASU’s College of Liberal Arts and Sciences’ Department of English, and currently is an associate professor of English at Rutgers University in New Jersey. 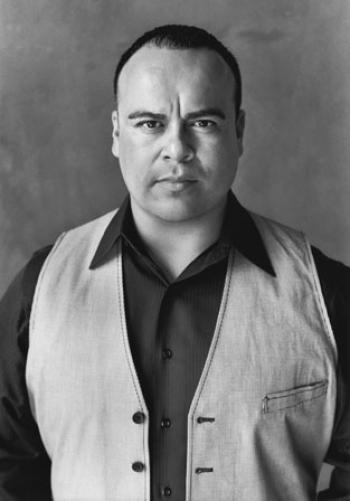 The Lambda Literary Awards, also known as the Lammys, identify and celebrate the best lesbian, gay, bisexual and transgender books of the year and affirm that LGBT stories are part of the literature of the world. The awards ceremony has consistently drawn an audience representing every facet of publishing. The prizes are sponsored by the Lambda Literary Foundation, a legacy of the Washington, D.C.-based Lambda Rising Bookstore, which closed its doors in 2010.

“Winning a Lambda Literary Award was an incredible recognition since this organization has worked so hard to connect LGBT literature to the reading public at large,” González said. “This award means that I’m doing two things right: writing work that sheds light on the LGBT experience in America, and writing work that will matter many years from now.”

“Unpeopled Eden” (Four Way Books, $15.95) opens in Mictlan, the region of the dead in Aztec mythology, which invites readers into a world of where “the men are never coming home” and “rows of ghosts come forth to sing.” Haunted by border crosses and forgotten deportees, lost brothers and sons, González unearths the beautiful and musical amid the grotesque. These mournful, mystical poems are themselves artifacts, a cry for remembrance “for those who patron saints are longing and despair.”

The 26th Annual Lambda Literary Awards ceremony was held on June 2 in New York City and brought together over 450 attendees, sponsors and celebrities to celebrate excellence in LGBT literature, making it the most glamorous and prestigious LGBT literary event in the world.

González is the author of four books of poetry and a contributing editor of Poets & Writers Magazine. His nine books of prose include two bilingual children's books, the two young adult novels in “The Mariposa Club” series, the story collection “Men Without Bliss,” the novel “Crossing Vines” and three books of nonfiction: “Butterfly Boy: Memories of a Chicano Mariposa,” “Red-Inked Retablos” and “Autobiography of My Hungers.”

González is also the recipient of the American Book Award from the Before Columbus Foundation, as well as Guggenheim and National Endowment of the Arts fellowships.

Learn the backstory of ASU's collegiate license plate program (also known as the Sparky Plate) by listening to a head-to-head quiz between two current Medallion Scholars, who benefit from sales of the plate.

Think you know the backstory of ASU's collegiate license plate program, which celebrates its 25th anniversary this year? Listen as Liz Massey, managing editor for ASU Magazine, quizzes two Medallion Scholarship students about the "Sparky Plate," which funds the scholarship – and see if your answers match theirs.

Also, find out about a new exhibit about the license plate program at the Tempe History Museum from museum exhibit coordinator Dan Miller. 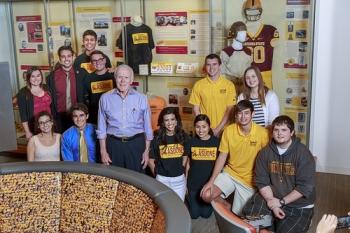 Listen to the episode embedded below. To find more episodes of The Alumni Experience, visit https://alumni.asu.edu/podcasts.