The Walter Cronkite School of Journalism and Mass Communication and the School of Sustainability have partnered to offer a Master of Mass Communications and a Master of Sustainable Solutions for incoming students interested in careers reporting on environmental issues and alternative energy, as well as for those working in sustainability sciences who communicate with journalists.

“One of the critical aspects of moving toward a sustainable future is helping people understand why and how sustainability is relevant to their lives, and how best to communicate those ideas,” said Christopher Boone, dean of ASU’s School of Sustainability. “This dual-degree opportunity with the Cronkite School will provide our School of Sustainability students with a versatile skill set to effectively reach and engage a broad audience on the very best solutions for building a sustainable future.”

Under the program, students take courses in methodology of sustainability research and problem solving, perspectives on sustainability, project management and methods through the School of Sustainability. The Master of Sustainable Solutions degree provides a knowledge base and skill sets to bring sustainability solutions to corporate, government and nongovernmental organization sectors.

At the Cronkite School students participate in advanced-level classes in reporting, data journalism and multimedia journalism. Students also have the opportunity to cover sustainability issues for Cronkite News, the school’s award-winning student news operation and news division of Arizona PBS.

“ASU was the first in the nation to establish a school with a focus on finding real-world solutions to important environmental and social challenges,” said Christopher Callahan, dean of the Cronkite School. “We are thrilled to be partnering with the School of Sustainability to help educate and train the next generation of leaders in sustainability and journalism.”

This is the fifth dual-degree offering for the School of Sustainability. ASU Master of Sustainable Solutions students can also pursue concurrent master’s degrees in public administration or public programs through ASU’s School of Public Affairs, a Master of Legal Studies through the Sandra Day O’Connor College of Law, or a Master of Urban and Environmental Planning through the School of Geographical Sciences and Urban Planning.

Engineering professor Edward Kavazanjian has excelled as a teacher, researcher and leader among professional colleagues — and he’s still striving to make major contributions to his field.

Edward Kavazanjian was around 9 years old when his father began experiencing serious health problems stemming from injuries sustained while serving in the military during World War II.

That meant six months of frequent trips for Kavazanjian, his mother and siblings to visit his father in a hospital near the Brooklyn shoreline along New York Harbor. 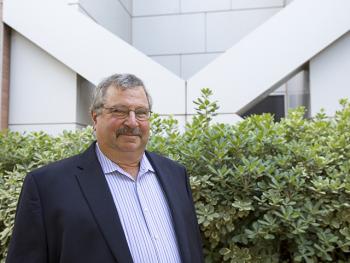 From there, he was able to watch the construction of the long and towering double-decked Verrazano-Narrows Bridge – the world’s longest suspension bridge at the time.

With the exception of wanting to grow up to play baseball for the New York Yankees, it was the first time Kavazanjian got career-minded.

“I watched this record-setting bridge being built, and I was just awed by this monumental structure,” he recalled. “I thought, 'That’s what I want to do. I want to build really big things like bridges and skyscrapers.’ ”

By age 17 the youngster who was good at math and science, who had played with metal Erector toy construction sets and built tree houses, was a freshman structural engineering student at the Massachusetts Institute of Technology. But he soon came close to veering from the path.

“I was not really enthralled by the structural engineering classes,” Kavazanjian said. “I took some geology classes and found those more interesting, so I considered changing my major.”

Before he could make the move he discovered geotechnical engineering — the field that’s all about building with, on, into and through rock, sand and other soils.

He had found the calling that would propel him to a doctoral degree from the University of California, Berkeley, a teaching position at Stanford University and then 20 years building an impressive résumé of noteworthy contributions to innovative engineering projects across the United States and around the world.

He would attain status as one of the leading geotechnical engineers in the country, a reputation he has enhanced by the research and education accomplishments he has made since joining Arizona State University a decade ago.

At the vanguard of his field

Kavazanjian — the Ira A. Fulton Professor of Geotechnical Engineering in the School of Sustainable Engineering and the Built Environmental, one of ASU’s Ira A. Fulton Schools of Engineering — is among this year’s cohort of ASU Regents’ Professors, the highest distinction bestowed on faculty members of Arizona’s state universities.

The title honors achievements in scholarship, research, creative endeavors and public service that have earned national or international distinction.

G. Edward Gibson, director of the School for Sustainable Engineering, wrote that Kavazanjian’s efforts are helping to place ASU at the leading edge of geotechnical engineering education, and producing a new generation of engineers equipped to aid the world in confronting formidable sustainability challenges.

“I knew from the outset, when we first met more than 40 years ago, that Ed had virtually unlimited potential to be an outstanding contributor and inspirational leader in his chosen field," Mitchell said. "He has certainly not disappointed.”

Rudolph Bonaparte, president and chief executive officer of the national engineering firm Geosyntec Consultants, has known Kavazanjian since their days as graduate students at Berkeley. They worked together for a decade at Geosyntec.

Bonaparte said Kavazanjian “has made profound contributions in both research and practice on topics ranging from earthquake engineering to geoenvironmental engineering to the improvement of unstable ground using innovative bio-mediated technologies, and is today one of the most influential and recognized geotechnical engineers in the world.”

Despite gaining such stature, Bonaparte said, “Ed remains unfailingly generous in advising and helping his colleagues.”

Tarik Hadj-Hamou earned his doctoral degree under Kavazanjian’s guidance at Stanford and later worked with him at Geosyntec. Now manager of solid waste and geotechnical services for SLR International Corporation, Hadi-Hamou continues to collaborate with Kavazanjian.

“Beyond Ed’s academic and professional achievements measured by research publications, honors and titles, Ed has two distinctive qualities that are not mentioned enough,” Hadj-Hamou said. “He has an uncanny ability to project enthusiasm about what he is doing that inspires people who work with him to share in that enthusiasm, and then want to challenge themselves to excel.

“He also has great team-building and team-leading abilities. In private practice he attracted and hired some of the best young engineers and mentored them successfully. On his projects, every team member, from the most junior to the most senior, felt valued and listened to. People always felt they were working with Ed and not for Ed.”

Service to students and colleagues

Colleagues say Kavazanjian exhibits the same qualities in mentoring students, providing graduate students opportunities to do research, and guiding undergraduates in producing their honors theses and graduate students in completing studies for master’s and doctoral degrees.

With his extensive connections in the industry, he has jump-started many students’ careers by helping them find jobs after graduation.

He also is a faculty adviser to the student chapter of Engineers Without Borders and has helped establish ASU’s geotechnical graduate student organization.

Students have benefited from the experiences that have made Kavazanjian a foremost expert in such areas as the analysis, design and construction of solid-waste landfills and containment sites, environmental restoration of hazardous sites, and techniques for reducing the impacts of earthquakes and soil erosion on buildings and infrastructure systems.

His successful work in those and related endeavors has earned him significant research support from the National Science Foundation, as well as three of the most prestigious awards given by the American Society of Civil Engineers (ASCE) for contributions to the engineering profession.

He has been sought out to serve on the leadership teams of numerous boards and committees in his areas of expertise — including those of the National Research Council of the National Academies of Science and Engineering and the Transportation Research Board.

He has been president of the ASCE’s 11,000-member Geo-Institute and is the current president of the U.S. Universities Consortium for Geotechnical Education and Research, representing more than 125 institutions of higher learning that teach and do research in the field.

He is the lead author of the Federal Highway Administration’s guidance document for the seismic analysis and design of geotechnical transportation facilities and structural foundations.

Such a wide-ranging record of accomplishment led to Kavazanjian’s election in 2013 into the National Academy of Engineering — a crowning career achievement for those in his profession.

But attaining that highest of honors has not kept Kavazanjian from striving to contribute to big advances in his field.

He is the director of the recently established Center for Bio-mediated and Bio-inspired Geotechnics (CBBG), a National Science Foundation (NSF) Engineering Research Center. Its goal is to expand the applications of the emerging field of biogeotechnical engineering, which uses or emulates natural biological processes for soil engineering.

The center’s research team expects to produce more effective methods and techniques for improving the structural sustainability of our built environments.

“Biogeotechnical is something new and different, and CBBG has the potential to make big discoveries,” Kavazanjian said. “For instance, if we can come up with just some of the solutions we will be working on to prevent property damage due to earthquake-induced liquefaction, it will more than justify the NSF’s investment. These kinds of possibilities are what keep me going.”

He is especially looking forward to sharing with current and future students what the center’s research reveals.

“Bringing new insights to students and seeing how that opens up their perspective on the important work they could do as engineers is why I love teaching,” he said. “Nothing has been as personally rewarding as seeing some of my former students succeed professionally and become my professional colleagues and closest friends.”