ASU’s Center for Meteorite Studies has acquired a significant new sample for its collection: a rare Martian meteorite that fell in southern Morocco in July 2011. It is the first Martian fall in about 50 years.

Since the observed fall of the famed Ensisheim meteorite in 1492, there have been 1,200 recovered meteorite falls. 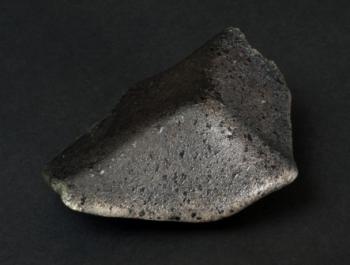 “Martian falls are extremely rare,” said Laurence Garvie, collection manager for the center. “Less than 0.5% of falls are Martians. This new sample is probably one of our most prized pieces and, without a doubt, one of the most significant additions to our collection in several decades.”

While a few new Martian meteorite finds are reported each year, there have been only four recovered Martian falls prior to 2011.

The center’s newly acquired sample – named “Tissint” – is a significant meteorite, as it is only the fifth known Mars meteorite fall. The center holds small research and display pieces of each of the known Martian falls and also has six Martian finds in its collection. There are a total of 61 known distinct Mars meteorites.

To date, nearly 7 kilograms of stones have been collected from last summer’s Martian meteorite fall in Morocco. The 349 gram sample the center received is one of the largest from the fall, and it is by far the center’s largest Martian meteorite.

“As far as I am aware, this stone is currently the largest one from this fall in any research collection at a museum or university in the U.S.,” said Meenakshi “Mini” Wadhwa, director of the center and a professor in the School of Earth and Space Exploration in ASU’s College of Liberal Arts and Sciences.

“This is an important meteorite for our collection from the research and education standpoint,” Wadhwa said. “We plan to study it in our laboratories here at ASU to understand how and when it was formed on the planet Mars. We also intend to let students and the public enjoy it by highlighting it in a special display when the center moves to the new Interdisciplinary Science and Technology Building IV this spring, which will house the center’s offices, meteorite preparation labs, a state-of-the-art collection storage vault and expanded gallery space for public viewing.”

With the main stone to be used on display, another smaller 21-gram sample will be used for research studies.

An ASU engineer looks at the "environmental imprint" resulting from all the resources, energy and land used to build and maintain the country's parking spaces.

Not when you factor in the economic costs, energy consumption and environmental impacts of building and maintaining extensive parking infrastructure on the scale that exists in the United States. 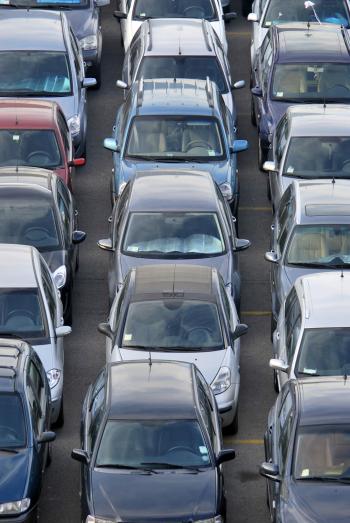 Mikhail Chester offers an accounting of such costs in his research on large infrastructure systems, particularly transportation systems.

He’s trying to provide data that can serve as a reliable guide for public policymakers to devise sustainable solutions to transportation-planning challenges.

Chester is an assistant professor in the School of Sustainable Engineering and the Built Environment, one of ASU’s Ira A. Fulton Schools of Engineering.

He estimates that there are as many as 844 million parking lot and parking structure spaces in the United States, or roughly three spaces for every automobile. That amounts to paved surfaces for parking covering nearly one percent of the land in the country – an area about the size of West Virginia.

If the area used for curbside parking is added to the count – spaces that go unused most of the time – then there may be as many as 2 billion parking spaces.

The article is discussed at length in the journal Environmental Research Letters. Some of the data it presents is the basis for a recent article in the New York Times.

The authors look at the costs of parking facilities over their life cycles, considering the resources and energy expended in building and maintaining the infrastructure, as well as the cause-and-effect relationships between parking systems, air pollution, urban congestion, health risks and energy use.

Their studies show that with the amount of certain pollutants resulting from construction and maintenance of parking facilities, the environmental impact is more extensive than that resulting from driving automobiles.

In other recent research, Chester and research partners at Carnegie Mellon University in Pittsburgh studied the impacts of automobile emissions in more than 80 metropolitan areas throughout the country. Their results are published in the Journal of the Transportation Research Board.

They estimate the economic costs for treating health impacts of driving and congestion at more than $140 million a day. These costs average to 64 cents per person per day, or 3 cents for every mile traveled.

While the costs of air emissions “are small relative to the overall cost of driving, the total external costs imposed on society [due to environmental impacts] are substantial,” the researchers write.