In the ranking, CSPO is the top university-based science and technology think tank in the United States. 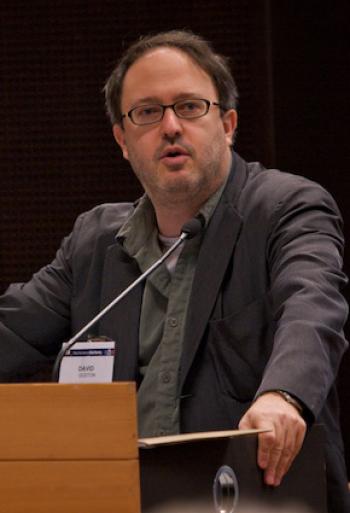 "While recognizing the limits of a reputational survey such as this, I think our placing so highly in it, and alongside many other much larger organizations, reflects that our faculty, staff and students are doing an exceptionally good job in performing high-quality research, training and outreach,” said David Guston, co-director of the consortium.

A comprehensive ranking of think tanks throughout the world, the report was released at the Center for Strategic and International Studies in Washington, D.C., on Jan. 22.

Originally founded in 1999 and moved to ASU in 2004, CSPO’s focus is on enhancing societal outcomes through improved connections between scientific research and the development of public policy. Co-directed by Dan Sarewitz and David Guston, the consortium brings together researchers, policymakers, practitioners and members of the public to develop knowledge and tools needed to better understand and assess the linkages between scientific activities, policy decisions and effective outcomes.

Some CSPO initiatives of recent years include:

• The launch of the Center for Nanotechnology in Society at ASU, the world’s largest center for research on the societal aspects of nanotechnology, including anticipatory governance – responsible management of emerging technologies.

• The African Innovation Project highlights technological accomplishments in the world’s second most populous continent while examining the critical roles of culture, needs, resources and values in technological development.

• The 2014 publication of the report High-Energy Innovation is the latest in a series of initiatives focused on energy innovation.

• A project on Adaptive Pathways to Climate Change (APaCC) in Nepal involving an interdisciplinary team of scholars and practitioners from ASU, University of Hawaii, a Nepali NGO, two Nepalese government organizations and a Nepalese university. With a focus on grassroots innovation, engagement and knowledge co-creation, the project is developing a model of climate resilient pathways to smallholder farmers of Nepal.

• An ongoing seminar series, New Tools for Science Policy, brings together science policy researchers and decision-makers in discussions about new ideas and approaches for improving the social value of science and technology.

• The new Center for Engagement & Training in Science & Society (CENTSS) program was launched in 2014 and consists of nine program areas that focus on the enhancement of communication and learning about science and technology, and the interaction between scientists, government, industry and the public.

The annual Go To index is published by the Think Tanks and Civil Societies Program at the University of Pennsylvania, which researches the role think tanks have in policymaking.

An online study into the social and financial experiences of adults is being conducted by counseling psychology researchers at ASU.

An online study of the social and financial experiences of adults is being conducted by counseling psychology researchers in ASU's College of Letters and Sciences, and participation is needed.

To take part in the study, participants must be at least 18 years of age and complete a 20-30 minute online survey.

Participants will be eligible to win a $50 gift card to Amazon.com.