One of the best ways to learn how our solar system evolved is to look to younger star systems in the early stages of development. Now, a team of astronomers has discovered a Jupiter-like planet within a young system that could serve as a decoder ring for understanding how planets formed around our sun. 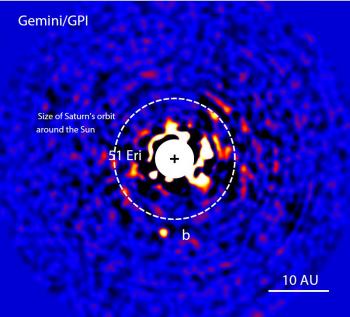 Discovery image of the planet 51 Eridani b with the Gemini Planet Imager taken in the near-infrared light on Dec. 18, 2014. The bright central star has been mostly removed to enable the detection of the exoplanet 1 million times fainter. Download Full Image

The new planet, called 51 Eridani b, is the first exoplanet discovered by the Gemini Planet Imager. It is a million times fainter than its star and shows the strongest methane signature ever detected on an alien planet, which should yield additional clues as to how the planet formed.

The results are published in the current issue of Science.

A clear line of sight

“To detect planets, Kepler sees their shadow; GPI sees their glow,” said Bruce Macintosh, professor at Stanford University who led the construction of GPI and now leads the survey.

To directly image planets, astronomers use adaptive optics to sharpen the image of a star, and then block out the starlight. Any remaining incoming light is then analyzed, the brightest spots indicating a possible planet.

After GPI was installed on the 8-meter Gemini South Telescope in Chile, the team set out to look for planets orbiting young stars. They’ve looked at almost a hundred stars so far.

“This is exactly the kind of planet we envisioned discovering when we designed GPI,” says James Graham, professor at UC Berkeley and Project Scientist for GPI.

A team from Arizona State University and the University of Georgia led the development of the target sample for the 600-star survey.

“By targeting young stars, we can catch planets while they are hotter and brighter and can study how planets evolve over time,” said ASU astrophysicist Jennifer Patience, an associate professor in the School of Earth and Space Exploration and part of the GPI Exoplanet Survey Team.

As far as the cosmic clock is concerned, 51 Eridani (51 Eri) is young — only 20 million years old — and this is exactly what made the direct detection of the planet possible. When planets coalesce, material falling into the planet releases energy and heats it up. Over the next hundred million years they radiate that energy away, mostly as infrared light.

Once the astronomers zeroed in on the star, they blocked its light and spotted 51 Eri b orbiting a little farther away from its parent star than Saturn does from the sun. The light from the planet is very faint – more than 3 million times fainter than its star – but GPI can see it clearly. Observations revealed that it is roughly twice the mass of Jupiter. Other directly imaged planets are five times the mass of Jupiter or more.

In addition to being the lowest-mass planet ever imaged, it’s also the coldest — 800 degrees Fahrenheit, whereas others are around 1,200 F — and features the strongest atmospheric methane signal on record. Previous Jupiter-like imaged planets have shown only faint traces of methane, far different from the heavy methane atmospheres of the gas giants in our solar system.

All of these characteristics, the researchers say, point to a planet that is very much what models suggest Jupiter was like in its infancy.

Of course, it’s not exactly like Jupiter. The planet is so young it still has a temperature of 800 Fahrenheit, hot enough to melt lead and similar to the temperature of Venus.

“Our analysis of the brightness of 51 Eri b at different colors immediately showed us that we were looking at something unique and exciting,” Patience said. She and her graduate students Abhi Rajan and Kim Ward-Duong led the comparison with atmospheres of other known imaged exoplanets and brown dwarfs (objects intermediate between stars and planets) to investigate the nature of 51 Eri b.

The key to the solar system?

In addition to expanding the universe of known planets, GPI will provide key clues as to how solar systems form. Astronomers believe that the gas giants in our solar system formed by building up a large core over a few million years and then pulling in a huge amount of hydrogen and other gases to form an atmosphere.

But the Jupiter-like exoplanets that have so far been discovered are much hotter than models have predicted, hinting that they could have formed much faster as material collapses quickly to make a very hot planet. This is an important difference. The core-buildup process can also form rocky planets like the Earth; a fast and hot collapse might only make giant gaseous planets. 51 Eri b is young enough that it "remembers" its formation.

Simulated fly-by of the 51 Eridani star and planet system from Franck Marchis on Vimeo.

Discoveries The College of Liberal Arts and Sciences Space exploration

ASU's Herberger Institute for Design and the Arts is welcoming urban arts like breakdancing and hip-hop with Urban Performance Practice, a new track in the bachelor's in performance and movement degree.

Edson “House” Magaña was still in high school when he got his nickname. It came from his preference in music — a strain of electronic dance music that provided a heavy beat he could dance to.

The nickname stuck through the years and today, Magaña is known as one of the most accomplished breakers, or breakdancers, in the Southwest. 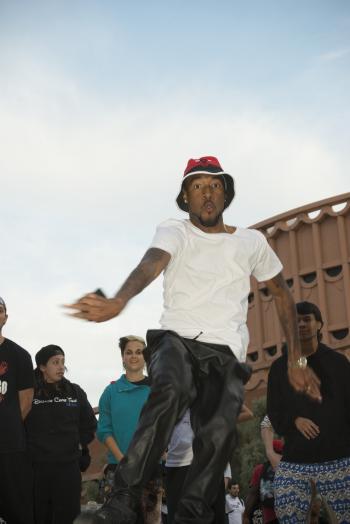 He’s also an Arizona State University alumnus, having earned his undergraduate degree in psychology from ASU in the ’90s while simultaneously receiving another kind of education, off campus, in urban dance and hip-hop. He founded the Furious Styles Crew and is a member of the Mighty Zulu Kings, a legendary urban art crew that dates back to the early ’70s.

But for a long time, he didn’t see a place for his passion in academia.

“I would walk by the dance department all the time, looking, but I saw people doing weird things,” Magaña said of the modern dance classes. “I was like, what's going on in there?”

These days, if you walk by the dance building at ASU you might still see some modern dance. But you could also catch someone breaking, waacking, voguing or any number of the urban dance styles Magaña has studied for most of his life. The variety comes courtesy of a new program at the ASU Herberger Institute for Design and the Arts.

Beginning in the fall 2015 semester, the ASU School of Film, Dance and Theatre in the Herberger Institute for Design and the Arts is introducing a new track in the Bachelor of Arts in Performance and Movement degree: urban performance practice. The program builds upon and unites an existing series of classes, clubs and events that have grown rapidly over the past several years in response to both student and community interest. The urban performance practice track offers a critical look at both the history and practice of urban dance and culture.

“It's the only program in the whole country where you can focus on urban dance, and it's really taken seriously,” said Sarah “Saza” Dimmick, who is pursuing her master's in dance. “We're able to examine it from an academic standpoint, looking at the social impact that it's had over the years, even re-examining the stereotypes and the things that are projected upon the culture. And it's really cool because we're kind of helping shape the direction that it's going to go. Creating thoughtful dancers, thoughtful artists within the urban forms that can take the culture to the next step.”

The roots of the program began with Urban Sol, a Herberger Institute initiative designed to support the existing community of urban artists in the Phoenix metro area, to welcome this community to ASU and to elevate the urban art movement in academic discussions. The highlight of Urban Sol is a yearly event (which shares the initiative’s name) that takes over Nelson Fine Arts Plaza, where students, faculty members and the wider community DJ, dance and create art together. This year, it will take place Oct. 19-24.

“We have this population that comes in and can’t find a home for themselves in the arts in a university setting, and we want to provide that home,” said Jacob Pinholster, director of the School of Film, Dance and Theatre.

Thanks to the urban performance practice track, Magaña returned to ASU and earned Master of Fine Arts in Dance this summer. He joined the program in 2013 precisely because of the opportunity to help shape the future of urban dance at ASU and in the greater Phoenix metro area at large.

“If you were to ask me 10 years ago if I’d be sitting here — no way,” Magaña says. “I still walk into the classroom and I’m like, OK, we really have turntables in the classroom. We really are sitting here reading and studying some guys that I've battled. This is incredible. … In general, ASU, I think, has done a great job so far of trying to respect the culture and respect the community that it’s going to represent.”

The performance-driven degree gives students the skills to practice urban art in its many forms, but it also instills in them a deep knowledge of and appreciation for the foundation of the urban arts movement.

“They always say you gotta know where you come from before you know where you're going,” says Tomas Stanton, a performance and movement student. “So to be able to learn the history, to be able to pass this history on to the next generation, especially in today’s climate where something like hip-hop has a very negative perception from a lot of people who don’t really truly understand it — developing that on an academic level, I think, is super important to preserving the culture, to moving it forward, and to making it more inclusive to everybody.”

Creativity Herberger Institute for Design and the Arts School of Film, Dance and Theatre Arts