EDITOR'S NOTE: This article was chosen as one of ASU's highlights from 2010. Look here for a look back at some of the year's most prized stories. 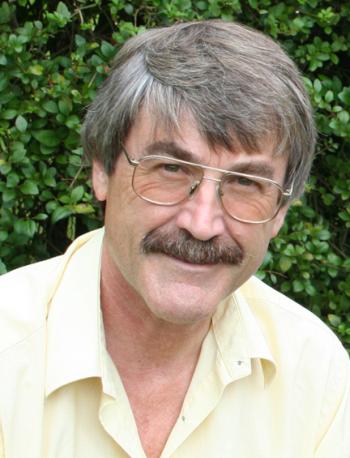 
Evidence that the toxic element arsenic can replace the essential nutrient phosphorus in biomolecules of a naturally occurring bacterium expands the scope of the search for life beyond Earth, according to Arizona State University scientists who are part of a NASA-funded research team reporting findings in the Dec. 2 online Science">http://www.sciencemag.org">Science Express.


It is well established that all known life requires phosphorus, usually in the form of inorganic phosphate. In recent years, however, astrobiologists, including Arizona State University professors Ariel Anbar and Paul Davies, have stepped up conversations about alternative forms of life. Anbar and Davies are coauthors of the new paper, along with ASU associate research scientist Gwyneth Gordon. The lead author is Felisa Wolfe-Simon, a former postdoctoral scientist in Anbar’s research group at ASU’s School">http://sese.asu.edu/">School of Earth and Space Exploration and Department">http://chemistry.asu.edu/">Department of Chemistry and Biochemistry in the College">http://clas.asu.edu/">College of Liberal Arts and Sciences.


“Life as we know it requires particular chemical elements and excludes others,” says Anbar, a biogeochemist and astrobiologist who directs the astrobiology program at ASU. “But are those the only options? How different could life be?” Anbar and Wolfe-Simon are among a group of researchers who are testing the limits of life’s chemical requirements.


“One of the guiding principles in the search for life on other planets, and of our astrobiology program, is that we should ‘follow the elements,’” says Anbar. “Felisa’s study teaches us that we ought to think harder about which elements to follow.”


Wolfe-Simon adds: “We took what we do know about the ‘constants’ in biology, specifically that life requires the six elements CHNOPS (carbon, hydrogen, nitrogen, oxygen, phosphorus and sulfur) in three components, namely DNA, proteins and fats, and used that as a basis to ask experimentally testable hypotheses even here on Earth.”


From this viewpoint, rather than highlighting the conventional view of the “diversity” of life, all life on Earth is essentially identical, she says. However, the microbe the researchers have discovered can act differently.


Davies has previously speculated that forms of life different from our own, dubbed “weird life,” might even exist side-by-side with known life on Earth, in a sort of “shadow biosphere.” The particular idea that arsenic, which lies directly below phosphorous on the periodic table, might substitute for phosphorus in life on Earth, was proposed by Wolfe-Simon and developed into a collaboration with Davies and Anbar. Their hypothesis was published in January 2009, in a paper titled “Did nature also choose arsenic?” in the International Journal of Astrobiology.


“We not only hypothesized that biochemical systems analogous to those known today could utilize arsenate in the equivalent biological role as phosphate,” notes Wolfe-Simon “but also that such organisms could have evolved on the ancient Earth and might persist in unusual environments today.”


Wolfe-Simon, now a NASA astrobiology research fellow in residence at the U.S. Geological Survey, was one of the participants, along with Anbar, at a workshop titled “Tree or Forest? Searching for Alternative Forms of Life on Earth,” that was organized in December 2006 by the BEYOND">http://beyond.asu.edu/">BEYOND Center for Fundamental Concepts in Science, a “cosmic think tank” at ASU. She is currently an adjunct faculty member at the BEYOND Center.


“That’s where it all began,” says Davies, a cosmologist, astrobiologist, theoretical physicist and director of the BEYOND Center.


“Felisa’s talk was memorable for being a concrete proposal,” Davies says. “Many of the talks at the workshop discussed searching for radically alternative forms of life with suggestions of the form ‘maybe something roughly like this,’ or ‘maybe a bit like that.’ But Felisa said, quite explicitly, ‘this is what we go look for.’ And, she did.”


“The idea was provocative, but it made good sense,” notes Anbar. “Arsenic is toxic mainly because its chemical behavior is so similar to that of phosphorus. As a result, organisms have a hard time telling these elements apart. But arsenic is different enough that it doesn’t work as well as phosphorus, so it gets in there and sort of gums up the works of our biochemical machinery.”


After leaving ASU, Wolfe-Simon began a collaboration with Ronald Oremland of the U.S. Geological Survey to chase down the hypothesis. Oremland was a natural choice to bring into the project because he is a world expert in arsenic microbiology. What Wolfe-Simon discovered is presented in the Science Express paper titled “A bacterium that can grow by using arsenic instead of phosphorus.”


The latest discovery is all about a bacterium – strain GFAJ-1 of the Halomonadaceae family of Gammaproteobacteria – scooped from sediments of eastern California’s Mono Lake, which is extremely salty with naturally high levels of arsenic.


In the laboratory, the researchers successfully grew microbes from the lake on a diet that was very lean on phosphorus, but included generous helpings of arsenic.


Key issues that the researchers needed to address were the levels of arsenic and phosphorus in the experiments and whether arsenic actually became incorporated into the organisms’ vital biochemical machinery, such as DNA, proteins and the cell membranes. A variety of sophisticated laboratory techniques was used to nail down where the arsenic went, including mass spectrometry measurements by Gordon at the W.M. Keck Foundation Laboratory for Environmental Biogeochemistry at ASU.


Commenting on the significance of the discovery, Davies says: “This organism has dual capability. It can grow with either phosphorous or arsenic. That makes it very peculiar, though it falls short of being some form of truly ‘alien’ life belonging to a different tree of life with a separate origin. However, GFAJ-1 may be a pointer to even weirder organisms. The holy grail would be a microbe that contained no phosphorus at all.”


Davies predicts that the new organism “is surely the tip of a big iceberg, and so has the potential to open up a whole new domain of microbiology.”


It is not only scientists, however, who will be interested in this discovery. “Our findings are a reminder that life-as-we-know-it could be much more flexible than we generally assume or can imagine,” says Wolfe-Simon, noting that because microbes are major drivers of biogeochemical cycles and disease this study may open up a whole new chapter in biology textbooks.


“Yet, this story isn’t about arsenic or Mono Lake,” Wolfe-Simon says. “If something here on Earth can do something so unexpected, what else can life do that we haven’t seen yet? Now is the time to find out.”


This study was funded in part by NASA’s Astrobiology Program. Wolfe-Simon, Anbar, Davies and Oremland are members of the NASA">http://astrobiology.asu.edu">NASA Astrobiology Institute “Follow the Elements” team at Arizona State University.

Although Rihards Kusiks scored 13 points, Baylor scored a 68-54 victory over the Sun Devils.

LaceDarius Dunn had 24 points with six 3-pointers and sparked the tie-breaking run after halftime as No. 11 Baylor stretched its home winning streak to 11 games with a 68-54 victory over Arizona State on Thursday night.

Dunn made all of his 3-pointers before bruising his left forearm when he fell hard to the court going for an offensive rebound with 6:43 left. He was on the court writhing in pain, then went to the bench, where he kept rubbing his arm and grimacing before returning 2 minutes later. He was still hurting when he got back in the game.

It was only Dunn's third game this season for Baylor (6-0).

Rihards">http://thesundevils.cstv.com/sports/m-baskbl/mtt/kuksiks_rihards00.html"... Kuksiks hit consecutive 3-pointers for Arizona State (3-3) in the opening minute of the second half to tie the game at 33. Dunn responded with a 3-pointer, the first of his two in a quick 7-2 run that gave Baylor the lead for good.

Dunn, the leading scorer last season when Baylor made it to an NCAA regional final and had a school-record 28 wins, was suspended for the first three games of the season after a domestic dispute charge earlier this fall.

In his three games since returning, Dunn has averaged 22.7 points a game and made 16 3-pointers. He was already Baylor's career leader for 3-pointers, and now has 315 - with at least one in 20 consecutive games.

Baylor was up 59-45 when Dunn got hurt, a play on which he was called for a foul. When he was sitting at the scorers table waiting to return, and even when he got back on the court, he was rubbing and shaking his arm.

Soon after getting back in the game, he dived on the court for a loose ball - reaching out with his left arm that was hit by a defender. He stayed in the game, and only made two free throws after that.

Baylor hadn't trailed at all its previous three games, and coach Scott Drew called a timeout after Arizona State had a 5-0 lead only 83 seconds into the game. The Bears responded with a 16-3 run, when the only ASU basket was Abbott's 3-pointer.

After Abbott's 3 put the Sun Devils up 8-7, they had four turnovers and got off one shot over the next 4 1/2 minutes. Jones had a dunk and another inside basket, Dunn hit a 3 and Walton had a fadeaway jumper for a 16-8 Baylor lead.

The Bears stretched the lead to 30-18 when J'mison Morgan gathered in the ball underneath the basket and made a reverse layup with just under 7 minutes left until halftime, when they still led 33-27.

Baylor's 11-game home winning streak matches the longest in the Ferrell Center. With exams coming up, the Bears don't play another game until Dec. 15, at home against Bethune-Cookman.