A dozen astronauts have walked on the moon, and several rovers have been piloted on Mars, giving us a good understanding of these off-world environments. But when it comes to asteroids, scientists enter uncharted territory.

Landing on an asteroid is notoriously difficult. 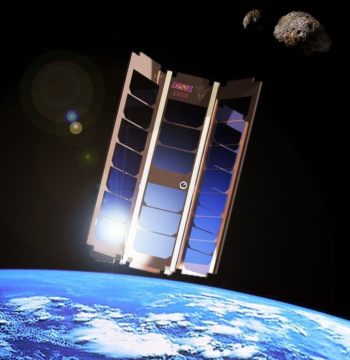 Asteroids have very little gravity because they have very little mass. Most of them appear to be rubble piles held together loosely, with surfaces covered in boulders and gravels and fine materials, much like the moon, but with a lot more cohesion. On an asteroid, a rock the size of a bank building weighs as much as a cricket on Earth, making an astronaut like a superman. But what would you anchor to, what you would land on and how would you move around?

Because scientists and engineers don’t know the most basic mechanical properties of an asteroid, sending a billion dollar landing mission to an asteroid is risky, and even likely to fail, until some preliminary investigations are conducted, requiring years of lead time.

A team at Arizona State University is looking to mitigate that risk and improve that schedule by building its own "patch of asteroid" inside of a small, spinning satellite costing less than $100,000. The project is called the Asteroid Origins Satellite, or AOSAT I.

“Landing on asteroids is one of the biggest challenges of our time,” roboticist Jekan Thanga said.

Thanga, an assistant professor in the School of Earth and Space Exploration at ASU, is the engineering principal investigator for AOSAT I. “And space agencies worldwide, including NASA, are very focused on meeting that challenge.”

Erik Asphaug, a planetary scientist and professor at ASU, is the science principal investigator for AOSAT I. He and Thanga plan on launching a miniature satellite later this year that will serve as the world’s first CubeSat microgravity laboratory. A CubeSat is a modular small satellite with a 10-by-10 centimeter base and various unit lengths. AOSAT I will be a 3U configuration, about the size of a loaf of bread, with two spun-up laboratories in the outer units, each housing a patch of real asteroid surface material.

In the first flight, one chamber will be filled to a depth of a few centimeters with very fine material representative of interstellar dust, or the fine "ponds" seen on several asteroids. The second chamber, otherwise identical, will be filled with bits of shock-fragmented chondrite meteorite material. Once launched into space and freely orbiting, these rocks will just tumble around – itself an interesting experiment. But to build a realistic regolith surface for scientists to explore, the satellite is spun, to create microgravity-like conditions.

“We’re taking asteroid material that landed on Earth and sending it back into space,” Asphaug said. “It’s a low-cost laboratory that really physically builds a patch of asteroid. It’ll be asteroid gravity. It’ll be made of asteroid stuff. We can do all sorts of experiments.”

To simulate the gravity field of a 300-meter-diameter asteroid, AOSAT I spins once every 4.5 minutes. It can spin faster to reproduce the regolith (surface material) conditions for much larger asteroids. This spin configuration is easily attained and stabilized by off-the-shelf approaches, making it a great approach for students to learn on.

While much of the CubeSat is off-the-shelf, the approach is novel. CubeSats have typically been used to test engineering designs in space, since it is a really constrained and relatively new form factor. Great science has been performed on CubeSats, although this has only been observational so far. CubeSats have not yet been used to do “test tube and beaker-type” experiments of the sort that are planned for AOSAT I, Thanga said.

Experiments will be conducted robotically in the end chambers. When AOSAT I is not spinning, it is a zero-gravity capsule. Here, experiments will be done to understand how dust clumps together to form asteroids – a process that plays out in zero gravity over long timescales. A simple robotic plunger is being designed to interact with the patch of regolith, and can be used to accrete a globule of particles, a miniature rubble pile asteroid that can be spun and shaken, observed by stereo cameras.

When AOSAT I starts to spin, these piles of grains will get accelerated to the outer walls. Observing that process will tell us much about nebular grain behavior and microgravity particle flows on asteroids, for example, following the formation of a crater.

Once the spinning AOSAT I has stabilized (once per few minutes), experiments will be conducted to give a better understanding of what asteroid surfaces are like. “The questions are very basic, and that’s what makes this so much fun,” says Asphaug. When you push slowly on a rock, does it lock into place or does it push aside the other rocks and slide into the surface? Do patterns form when you send a vibration through the regolith? Does cohesion dominate overwhelmingly over gravity, so that rocks stick together into aggregates? What happens when you charge the particles?

Asphaug and Thanga hope to answer these questions to help determine what kinds of devices would be best for landing on real asteroids. “An asteroid could just be lots of rock, just grouped together into this larger entity, but there’s nothing holding it together,” Thanga said. “So if something is going to grapple and try to land on this, there’s nothing to grapple to.”

Despite the small scale of the experiments (the asteroid patch will be slightly smaller than a CD case), Asphaug and Thanga are confident in the real-world applications of AOSAT.

“These rocks might not be able to tell the difference, whether they are in the AOSAT centrifuge or back on their home asteroid,” says Asphaug. Once the AOSAT is spun up to mimic the gravity field of a ~300 m asteroid (gravity field 10-5 that of Earth), then it can be used to test mechanisms for asteroid landing. The first AOSAT will use a simple arm that does some basic interactions, while next generation AOSATs will be configured with more advanced robotic equipment.

Thanga uses the analogy of a wind tunnel to describe the scientific approach to their experiments. In a wind tunnel, researchers subject small-scale models of aircraft to conditions they expect in flight. The calculations and designs are then scaled up and applied to the real thing. “We can test asteroids in this wind tunnel-like analogous system, prove and disprove theories, and get a better understanding of our models,” says Thanga.

Viranga Perera, a graduate student at ASU who is managing the project systems engineering, thinks it is “fascinating that this very low-cost AOSAT platform can be used to study such a fundamental concept as planetary accretion, and that it can serve as a test bed for future asteroid sample return missions.”

ASU College of Health Solutions and College of Nursing & Health Innovation faculty continue to gain recognition for work that advances the health field and supports the students they serve.

Arizona State University College of Health Solutions and College of Nursing & Health Innovation faculty continue to gain recognition for work that advances the health field and supports the students they serve. 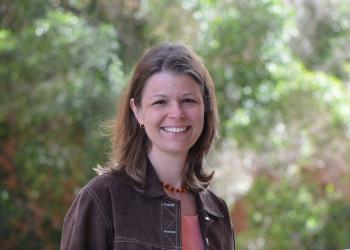 This month, Karen Sweazea, assistant professor in the School of Nutrition and Health Promotion in the College of Health Solutions, will be honored by the American Physiological Society as the recipient of the 2014 Dale J. Benos Early Career Professional Service Award. Sweazea has served as a student mentor in multiple roles, such as an Obama Scholars Mentor for underprivileged freshmen at ASU. Sweazea also received an Outstanding Faculty Mentor Award from the Faculty Women's Association.

Michael Dorman, a professor in the Department of Speech and Hearing Science in the College of Health Solutions, received the Faculty Service Award at the ASU Founders' Day Dinner in February at the Arizona Biltmore.

Janet O’Brien, simulation nurse specialist in the Learning Resource Center in the College of Nursing & Health Innovation, was nominated for the March of Dimes 2014 Nurse of the Year award for her outstanding efforts in the nursing field.

Adriana Perez, a Southwest Borderlands Scholar and College of Nursing & Health Innovation assistant professor, was selected to serve on UnitedHealth Group’s Center for Nursing Advancement’s External Nursing Advisory Board. The goal of the board is to inform, create and evolve nursing best practices in order to create strong partnerships across nursing, education and the health care industry; influence nursing policy and changes in the national landscape; and further the nursing profession.

"We formed the External Nurse Advisory Board to help lead the way in advancing nursing as a profession, and influencing thought leadership and innovation in nursing and health care in our country," said Dawn Bazarko, senior vice president Center for Nursing Advancement at UnitedHealth Group and board co-chair.

Elizabeth Reifsnider, associate dean of research for the College of Nursing & Health Innovation, was selected as a 2014 fellow for the American Association of Nurse Practitioners. The purpose of the association fellows is to impact national and global health by engaging recognized nurse practitioner leaders who make outstanding contributions to clinical practice, research, education or policy, enhancing the association's mission. It is also to provide a forum to extend and enhance fellows’ efforts to mentor and to facilitate leadership development of nurse practitioners. The induction ceremony will be held during the group’s national conference in Nashville, Tenn. this summer.

Next month, Craig Thatcher will join the College of Nursing & Health Innovation as a senior associate dean and professor. Thatcher has a long-standing association with ASU, having served as executive dean of the college in 2009. He is a strong advocate of interprofessional education. During his first tenure at the college, he helped secure a Macy Foundation grant to advance interprofessional education between the doctor of nursing practice program, as well as the doctor of pharmacy and medical programs at the UA College of Medicine-Phoenix. Thatcher most recently served as professor and associate dean for the College of Technology and Innovation, where he was responsible for advancing student recruitment, student advising and engagement, and oversaw academic personnel actions for the college.

Earlier this month, Donna Velasquez was inducted into the Western Academy of Nurses. The academy recognizes and honors nurses who have demonstrated excellence in nursing practice and have advanced practice in direct care, education or research. Velasquez is a clinical associate professor and coordinator of the Family Nurse Practitioner program for the College of Nursing & Health Innovation.

Angela Chen, an associate professor in the College of Nursing & Health Innovation, was selected as the principal investigator for a grant from Sigma Theta Tau International. Chen will conduct a pilot study of a computer-tailored intervention to promote HPV vaccination among Mexican American adolescents.

Cris Wells, director of interprofessional programs for the College of Nursing & Health Innovation, and Svetlana Mihaylova-Todorova, of Maricopa Integrated Health System (and graduate of the Clinical Research Management program), were highlighted in the Arizona Biomedical Research Commission’s Annual Report for their “Best Poster of the Year Award” from the Society of Research Administrators.