Not many students can say that they spent their time as an undergraduate getting up-close-and-personal with a nationally-renowned museum collection containing works by artists ranging from Rembrandt to Warhol – but Dillon Vaughn can.

Vaughn, who graduated this December with a bachelor of arts from the Herberger Institute for Design and the Arts, majored in film and media production through the School of Film, Dance and Theatre, and minored in studio art through the School of Art. His time at ASU was supplemented by a unique student job: print room assistant at the ASU Art Museum, where he worked closely with the museum’s print collection manager, Jean Makin, to care for the more than 5,000-item collection held in the Jules Heller Print Study Room. 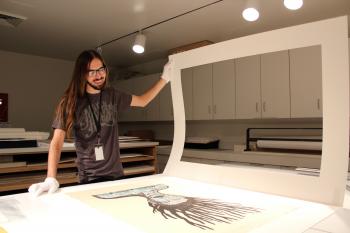 In this position, Vaughn has closely handled thousands of artworks from artists ranging from Durer to Diebenkorn, from 15th-century European masters to American abstract expressionists and everything in between.

“I expected I’d be seeing a lot of art, but I had no idea the size and scope of the [museum’s] print collection,” Vaughn says. “It’s definitely another level [from] anything I’d ever done before.”

“We have many treasures in the Jules Heller Print Room, and our student workers are among them,” says Makin. “Over the last three and a half years, Dillon became my go-to person for pulling prints, matting and framing, vinyl-cutting and whatever else I need done, and I feel confident that he’ll have a great future.”

One of Vaughn’s favorite parts of working at the museum is the access that he has to artworks in storage that are not frequently exhibited. When he has downtime at work, he looks for “hidden gems” in the collection, less-appreciated works that, as he describes it, “[most of] the staff might not even know about.”

“It’s definitely more of a learning experience than I could get from any class that I take, because just seeing stuff behind glass or in a textbook or online is completely different than coming in and handling it every day,” Vaughn says. “It makes it this personal experience, where you’re seeing something because you want to see it and not just because it’s there.”

After completing an associate’s degree in fine arts at Mohave Community College in his hometown of Lake Havasu City in 2011, Vaughn transferred to ASU. Through Mohave Community College, Vaughn received the full-ride All-Arizona Academic Team scholarship, enabling him to attend his choice of one of the three Arizona state universities. After he researched the opportunities available at each university, ASU emerged as the clear choice, primarily because of its cutting-edge film program and big-city location.

As a student in the School of Film, Dance and Theatre, Vaughn has taken classes in everything ranging from sound editing to cinematography. One of his favorite classes, he says, was in documentary filmmaking, in which Vaughn worked with a local musician to film a documentary on him as he was recording his new album. “It was so much fun because I was surrounded by people that were actually working to accomplish something that they love and make this project that everyone else will enjoy.”

Another highlight of his experience at ASU was a six-week study-abroad trip to Rome led by professor Kevin Sandler, who teaches in the film and media studies program in the ASU Department of English. “[It was] an experience I can’t put into words easily,” Vaughn says, and the cross-institute opportunity “ opened doors within the film community. I made stronger connections with people that are pursuing different disciplines.”

One such connection paid off when Vaughn began working on his senior capstone project – a project for which he cast one of his screenwriting professors, Christopher Bradley, to play “a delusional guru who is paid to take two post-grad friends out into the woods and show them the path to enlightenment.” Vaughn wrote the script himself, directed and filmed the movie and edited it. The final project, he says, will be close to 10 minutes long. Once he’s put the finishing touches on the film, he plans to host a private screening for his family and classmates – and possibly submit it to some short-film festivals.

Vaughn’s passion for both film and visual art reaches back to his childhood, and he credits his family with inspiring him to follow this path. “I grew up with a grandma that ran a magazine store, and my parents owned a music store, so it was like I was looking at album covers and reading comic books no matter where I went after school. It inspired me to do something along [those] lines. I thought it’d be cool to illustrate album covers or movie posters – but nobody does that anymore, so that’s why I switched into film.”

His father, who was diagnosed with fibromyalgia when Vaughn was in elementary school, has also been a key aspect in his journey. Growing up, his family endured several hardships and was even homeless for a short time, but Vaughn remembers that “there were always movies” in their lives. Vaughn’s mother also encouraged him to pursue a university education. While he was a student at Mohave Community College, his mother studied to become a registered nurse at the same time, and the two of them walked together at his community college commencement ceremony. “We have graduation photos together,” he says. “It was really great.”

After he graduates from ASU, Vaughn plans to stay in Tempe and continue to build his portfolio. He has already begun freelancing and working with local bands to create music videos, which he says is a natural choice for combining his interests. “[Music videos are] short-form projects completely based around visuals and sound, and you have the option to tell a story, or you can just make something that’s just a work of art. It’s like combining everything I love into one career path.”

He also credits his experience at the museum with opening doors: “It’s really eye-opening [and has] given me all these different skills ... I think the exposure that I had to art, combined with all that, gives me a ton of career options that I can also pursue.”

“Our University Professors are groundbreaking leaders in their creative art or science,” Crow said. “They represent the world-class minds that choose ASU as the place to advance their work and impart their knowledge with the next generation of master learners.” 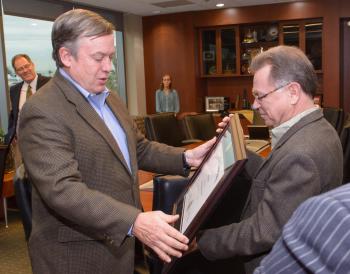 “We want to honor those faculty members with longstanding accomplishments in innovation, mentorship, research and entrepreneurship,” Page said. “These exceptional senior researchers spur new discoveries in science and in self-discovery, develop strong programs of study and significantly impact our communities.”

Roy Curtiss is a professor in the School of Life Sciences and the director of the Centers for Infectious Diseases and Vaccinology and Microbial Genetic Engineering in the Biodesign Institute. He is a member of the National Academy of Sciences and a fellow of the American Academy of Microbiology, the American Association for the Advancement of Science, the St. Louis Academy of Sciences and the Arizona Arts, Science and Technology Academy. His research uses microbial genetic manipulation to address problems of global concern, including the development of live vaccines to reduce the destruction and death caused by infectious disease agents of fish, poultry, swine, cattle and humans. His recent research emphasizes the design and construction of cyanobacterial strains to maximize production of biofuels and biofuel precursors. Curtiss has more than 360 journal articles to his credit. In 2014, he received a Lifetime Achievement Award from the American Society for Microbiology and the AZBio Pioneer Award for Lifetime Achievement by the Arizona BioIndustry Association.

Regents' Professor Bert Hölldobler is a faculty member in the School of Life Sciences. He has authored or co-authored more than 300 scientific research papers, in addition to four books with longtime collaborator, Harvard Professor Emeritus Edward O. Wilson. This dynamic duo received the Pulitzer Prize in 1991 for “The Ants,” a groundbreaking work on the list of the top 100 books of the century, released by Modern Library list of Random House Publishers. His honors include 24 of the top awards for scientific research and lifetime achievement, including the prestigious Cothenius Medal from the German National Academy. At ASU, Hölldobler helped to build a dynamic research collective – the social insect research group (SIRG). This group studies bees, ants, termites and wasps, with a focus on neuroscience, biomedicine, genetics and epigenetics, complex adaptive systems, sociobiology and robotics. The group’s synergistic partnerships contribute to many high-impact publications and advances. These include the sequencing of the first complete genome of the honey bee and six economically important ant species, with partners from across the globe.

Regents’ Professor Stuart Lindsay is the director of the Center for Single Molecule Biophysics in the Biodesign Institute at ASU. He is also the Nadine and Edward Carson Professor of Physics and Chemistry in the Department of Physics and the Department of Chemistry and Biochemistry. Lindsay holds 31 U.S. patents, co­founded Molecular Imaging (now part of Agilent Technologies) and more recently, Recognition AnalytiX. He has published over 200 research papers and is a fellow of the American Physical Society, the American Association for the Advancement of Science and the Institute of Physics. His research interests include nanoscale chemical mapping, applications of nanoscience for sustainable energy, new techniques for DNA and protein sequencing based on electron tunneling, and nanoscale probes of epigenetic markings and cell biochemistry. Most recently Lindsay lead a team of scientists from ASU and IBM's T.J. Watson Research Center in the development of a prototype DNA reader that could make whole genome profiling an everyday practice in medicine in the near future.

Dr. Eric Reiman is the executive director of Banner Alzheimer’s Institute in Banner Good Samaritan Medical Center in Phoenix, clinical director of the neurogenomics program with the Translational Genomics Research Institute (TGen) and is a professor of practice in ASU’s School of Life Sciences. He helped to establish the Arizona Alzheimer’s Consortium, which includes the Arizona Alzheimer’s Research Center and the Arizona Alzheimer’s Disease Core Center, which he directs. He is also on the board of directors of the Flinn Foundation. Reiman has authored more than 200 publications and pursues efforts to leverage Arizona’s scientific and organizational resources to promote understanding, early detection and tracking of Alzheimer’s disease and develop disease-slowing and prevention therapies.

Regents’ Professor Alberto Ríos was named the state’s inaugural poet laureate in 2013 and was elected to the Board of Chancellors of the Academy of American Poets in 2014. Ríos is the recipient of the Western Literature Association Distinguished Achievement Award, the Arizona Governor's Arts Award, fellowships from the Guggenheim Foundation and the National Endowment for the Arts, the Walt Whitman Award, the Western States Book Award for Fiction and six Pushcart Prizes in both poetry and fiction. He has published 10 books and chapbooks of poetry, three collections of short stories and a memoir. His individual works have also been included in “The Norton Anthology of Modern Poetry,” and more than 500 other national and international literary anthologies and journals. He is the Katharine C. Turner Endowed Chair in the Department of English and the host of PBS Channel 8, Books & Co. Ríos has led many community-based projects across the state. His work is regularly taught and translated, and has been adapted to dance and both classical and popular music.