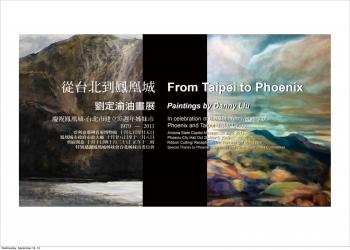 Liu is a Phoenix/Taipei painter of two places. He started his painting career in his college days in Taipei, while attending National Taiwan University. He has three distinctive periods in his painting career, that of Taiwan, California and Arizona.

The paintings exhibited are largely the landscapes of Taiwan and Arizona. They express his personal perspectives of the enchanting outskirts of these two cities. Akin to Tonalism, his recent landscapes are in obscure hues, contrasted by luminous and evocative atmospheric effects with brush strokes sweeping over the open sky of Arizona and the misty mountain air of Taiwan. Serendipitously, the paintings served the purpose of the promotion of enhanced cultural exchange between sister cities.

Liu is a Fellow of American Institute of Aeronautics and Astronautics. He earned an MSAE form Georgia Tech and a doctorate from University of Southampton, U.K. Liu spent ten years in Taipei and has been a resident of Arizona for the last thirty years.

For information regarding attendance to the receptions at noon, Oct. 10 and Oct. 30 (with refreshments), contact Phoenix-Taipei sister-cities chairwoman, Linling Lee at 602-418-8895 or azcmca@hotmail.com.

ASU will not increase tuition for Arizona undergraduate students for the academic year that begins in fall 2014.

“ASU is focused on providing an exceptional education,” said ASU President Michael M. Crow. “Our commitment to the people of Arizona is to use innovation and operational efficiency to make access to such an education available to all who are able and willing to do the work.”

ASU will deliver a formal proposal to the Arizona Board of Regents in the spring as part of the regular process for setting tuition. The university is making this announcement early in order to give Arizona undergraduate students and their families as much planning time as possible.