Computational modeling that examines evidence of how hominin groups evolved culturally and biologically in response to climate change during the last Ice Age also bears new insights into the extinction of Neanderthals. Details of the complex modeling experiments conducted at Arizona State University and the University of Colorado Denver will be published in the December issue of the journal Human Ecology, available online Nov. 17. 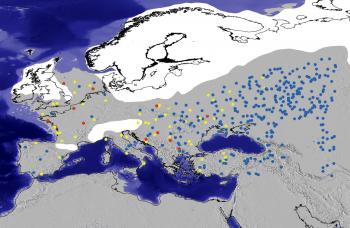 “To better understand human ecology, and especially how human culture and biology co-evolved among hunter-gatherers in the Late Pleistocene of Western Eurasia (ca. 128,000-11,500 years ago) we designed theoretical and methodological frameworks that incorporated feedback across three evolutionary systems: biological, cultural and environmental,” said Michael Barton, a pioneer in the area of archaeological applications of computational modeling at Arizona State University.

“One scientifically interesting result of this research, which studied culturally and environmentally driven changes in land-use behaviors, is that it shows how Neanderthals could have disappeared not because they were somehow less fit than all other hominins who existed during the last glaciation, but because they were as behaviorally sophisticated as modern humans,” said Barton, who is lead author of the published findings.

“It’s been long believed that Neanderthals were outcompeted by fitter modern humans and they could not adapt,” said Riel-Salvatore. “We are changing the main narrative. Neanderthals were just as adaptable and in many ways, simply victims of their own success.”

The interdisciplinary team of researchers used archeological data to track behavioral changes in Western Eurasia over a period of 100,000 years and showed that human mobility increased over time, probably in response to environmental change. According to Barton, the last Ice Age saw hunter-gathers, including both Neanderthals and the ancestors of modern humans, range more widely across Eurasia searching for food during a major shift in the Earth’s climate.

The scientists utilized computer modeling to explore the evolutionary consequences of those changes, including how changes in the movements of Neanderthals and modern humans caused them to interact – and interbreed – more often.

According to Riel-Salvatore, the study offered further evidence that Neanderthals were more flexible and resourceful than previously assumed.

To reach their conclusion, the researchers ran a computer program for the equivalent of 1,500 generations showing that as Neanderthals and modern humans expanded their yearly ranges, the Neanderthals were slowly absorbed by more numerous modern humans until they had disappeared as a recognizable population.

“We tested the modeling results against the empirical archaeological record and found that there is evidence that Neanderthals, and moderns, did adapt their behaviors in the way in which we modeled,” explained Barton. “Moreover, the modeling predicts the kind of low-level genetic admixture of Neanderthal genes that are being found in the newest genetic studies just now being published.

“In other words, successful behavioral adaptations to severe environmental conditions made Neanderthals, and other non-moderns about whom we know little, vulnerable to biological extinction, but at the same time, ensured they made a genetic contribution to modern populations,” Barton said.

The authors noted that “the methods we illustrate here offer a robust, new framework in which researchers can begin to examine the effects that such invisible characteristics could have on the observable record.”

“The kind of modeling we did in this research is very new in paleoanthropology, as is the continental scope of the archaeological analysis we used to test the model results,” noted Barton.

“However, such computational modeling can refine our understanding of long-term human impact on the environment that can help inform land-use decisions for our future,” said Barton, who also is co-director of ASU’s Center for Social Dynamics and Complexity, which leverages the emerging field of complex systems to foster interdisciplinary research on fundamental questions of social life.

The research presented in Human Ecology was supported in part by the National Science Foundation, a Fulbright Senior Research Fellowship and a Fulbright Graduate Student Fellowship.

Leininger traveled the entire length of Scottsdale Road, from its start in Tempe to its termination in Cave Creek. All 26.9 miles of it. All in the name of art. All by foot. 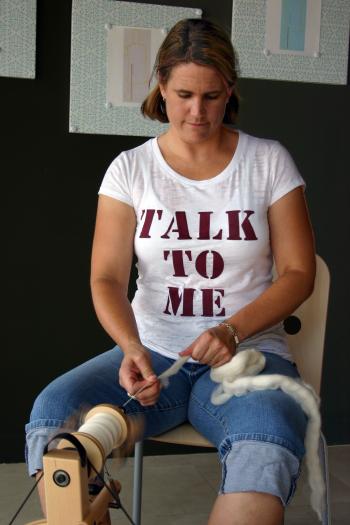 Leininger, a visiting professor in the Herberger Institute School of Art, received a grant from Scottsdale Public Art to create an interactive public art project in celebration of the city of Scottsdale’s 60th anniversary. And the only way to interact with people was to go out and meet them, from the city’s top to bottom.

The purpose of the project, Leininger said, was to record an audio history of the city, and to create a banner to commemorate the idea that “we only know a place through our collective experiences.”

Armed with a small digital audio recorder and wearing a T-shirt that said “Talk to Me,” with a QR (quick response) code printed on the back, Leininger walked a portion of Scottsdale Road each day, picking up where she had left off the day before.

“I asked people who ‘live or play’ in Scottsdale what they remembered, how the town has changed,” she said. “The first part of the walk was dismal because there were so many cars.”

Leininger also visited various public events in Scottsdale, such as a farmers market, during the six-week project, meeting people and recording their stories about Scottsdale.

She also worked on the banner in a gallery space on Marshall Way, where she invited visitors to record their Scottsdale stories.

During the project, Leininger kept a blog and posted some of the audio stories with it.

On May 17, she wrote in her blog, “Walking provided me the time to slow things down and to make mental notes of images I saw as I walked by. As I was wearing the project shirt that says ‘Talk To Me,’ I was also observing how people responded.

“No one talked to me. Not even the crazy guy dressed up as a medieval king in front of the pawn store just south of Indian School Road. Not sure what that says about the community, but it definitely was interesting to witness people staring at my shirt and not saying anything!

“During the remainder of the week, I will be reflecting upon this journey taken today and make a collage inspired from images I saw on this walk in addition to beginning the knitting of the banner that will read, ‘This Much I Know.’ Come and visit the space on Thursday from 2 to 9 p.m., and don’t hesitate to talk to me!”

People actually did talk to her on both the walk and in the gallery space, and she ended up recording 10 people in depth. (Their stories are posted on the blog chartedterrain.wordpress.com.)

For the banner, Leininger spun yarn using natural dyes such as creosote, from cotton and wool – “the primary fibers of Arizona,” she said. With the yarn, she knit a banner with the words “This Much I Know to Be True” as the primary pattern. “The phrase is derived from a folk saying,” Leininger said.

What surprised this Chicago native about Scottsdale?

“How it has always been marketed as a resort-style community either for retirees or the luxury of living in the Southwest,” she said. “There’s a fantasy that we have with the West – the cowboy image, the newness of the modern age. One long-time resident brought me a sales brochure for houses in the 1950s and 60s. It touted the newness of the homes.

“Now both of those coexist, and Scottsdale is more business-oriented today. Most of the people who live in Scottsdale are so happy to be in Scottsdale. It does seem to be a town that supports culture, with farmers markets, free concerts and other events, for example.”

During the project, Leininger walked two to three hours a day, eventually getting a blister on her foot because, she says, she wore “the wrong shoes.”

As the hours and miles went by, she began to see what is unique to Scottsdale. On May 25, she wrote, “Much of the suburban landscape that comprises this part of Scottsdale is not unique to Scottsdale. Similar buildings, shopping centers, land markers are used throughout the country. So what makes this experience unique?

“Most certainly it was the natural elements: the birds, rabbits, cacti and even ‘foreign’ flora that has been integrated into the desert landscape such as the palm tree. Shown here (see photo) is the prickly pear cactus covered with cochineal, which is a natural dye source that is very unique to this part of the world, let alone the country, and provides a stunning dye for fibers as well as a main ingredient in cosmetics and food.

“And, as I am incorporating cochineal dyed yarns into the project, I thought it apropos to include an image of this bug’s habitat.”

In her last blog, July 12, Leininger mused about how such a project would change it were done in another city outside of Arizona.

“Who would talk and interact with me if this project took place in L.A., New York or Chicago? What sounds and visual stimulation would be captured through similar processes? While the objects produced through this partnership with Scottsdale Public Art are specifically an individual’s response to location, the visual artist acts as a lens, focusing on the minutia that make up the larger spectrum we experience.

“Artists are interpreters of the environment, our culture and identity, and I was happy to have the opportunity to act as a lens for the city, peeling away at the layers of history, physicality and interactions that make this place unique.”

At ASU, Leininger teaches woven structures, 3-D constructions – “the more dimensional side of fiber,” she said. “I create fabrics and turn them into dimensional objects.”

She earned her bachelor of fine art degree from the School of the Art Institute of Chicago and a master’s in fine art from ASU.