Four Arizona State University archaeologists are looking into this as part of an international team examining how people can be most resilient to climate change when it comes to food security. 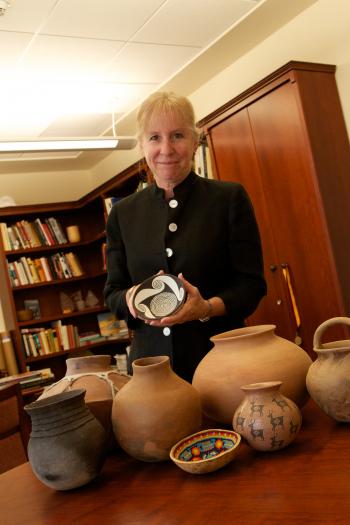 The group questioned whether vulnerability to food shortages prior to a climate shock – not the actual experience of the food shortage – is related to the scale of impact of that shock. The researchers found a strong relationship.

The team used long-term archaeological and historical data from the North Atlantic Islands and the U.S. Southwest to form the basis of their understanding of changing dynamics in these areas. Each case in their study included information on evolving social, political and economic conditions over centuries, as well as climate data.

The extended timeframe and global scope allowed them to witness changes in the context of vulnerabilities and climate challenges on a wide scale.

“The pattern is so consistent across different regions of the world experiencing substantially different climate shocks that the role of vulnerability cannot be ignored,” said Margaret Nelson, ASU President’s Professor in the School of Human Evolution and Social Change.

Nelson made her comments Feb. 16 at the annual meeting of the American Association for the Advancement of Science in Chicago.

The other ASU archaeologists involved in the study are professors Keith Kintigh, Michelle Hegmon and Kate Spielmann, all of the School of Human Evolution and Social Change in the College of Liberal Arts and Sciences.

Their findings support the argument for focusing on reducing vulnerabilities to climate shocks to boost resilience, which will ultimately lead to fewer required recovery efforts when crises occur. Nelson said that most often, disaster management does not address vulnerabilities prior to shocks, but instead focuses on returning a system to its previous condition following a disaster.

“Exposures to climate challenges and other environmental risks are not the sole causes of disasters,” she said. “People have unintentionally built vulnerabilities through decisions and actions in social, political and economic realms.”

Nelson’s project is funded by the National Science Foundation and the Wenner-Gren Foundation, and includes collaborators from such diverse institutions as the National Museum of Denmark and the North Atlantic Biocultural Organization.

The fourth annual Arizona Solar Summit will focus on introducing innovative policies, programs and technologies that are critical to reshaping Arizona’s energy markets.

The Arizona Solar Summit brings together people and organizations to advance the solar industry on both the regional and national levels, creating a network to propel Arizona to national prominence in the industry.

The fourth annual Arizona Solar Summit, part of the 2014 Sustainability Solutions Festival, will focus on introducing innovative policies, programs and technologies that are critical to reshaping Arizona’s energy markets.

Participants will gain a better understanding of Arizona’s current energy market conditions, solar energy’s place in regional and national markets, and ideas for accelerating the penetration of clean technologies into this market.

Attending members of the media will have the following opportunities to engage with speakers and participants at the Arizona Solar Summit:

Full details are available online at http://azsolarsummit.org/summit-iv-february-2014. Highlights include: