In our zest for cleanliness, have we permanently muddied our nation’s waters?

A science team from Arizona State University, in collaboration with federal partners, has completed the first statewide analysis of freshwater bodies in Minnesota, finding widespread evidence of the presence of active ingredients of personal care products in Minnesota lakes, streams and rivers. 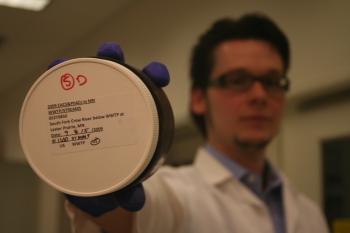 These products are a billion dollar industry and can be found in antimicrobial soaps, disinfectants, and sanitizers to scrub our hands and clean countertops. Hundreds of antimicrobial products are sold in the United States, many marketed with efficacy claims that remain elusive due to the short duration of the average consumer’s handwashing practices. The fate of these products can be traced from home use to sewers to wastewater treatment plants to eventually, downstream bodies of water.

The research team focused on two active ingredients found prominently in anti-bacterial soaps – triclosan and triclocarban – which have come under scrutiny by the EPA and FDA due to their environmental and human health concerns. These compounds persist for decades in the environment, and both triclocarban and triclosan are among the top 10 pharmaceuticals and personal care products most frequently found in the environment and in U.S. drinking water resources.

“This study underscores the extent to which additives of antimicrobial consumer products are polluting freshwater environments in the U.S.; it also shows natural degradation processes to be too slow to counter the continuous environmental release of these endocrine disrupting chemicals,” said Rolf Halden, director of Environmental Security at the Biodesign Institute and professor in the Ira A. Fulton School of Sustainable Engineering and the Built Environment.

Halden’s research focuses on the interconnectedness of the water cycle and human health, with special emphasis on the role of manmade products and human lifestyle choices on environmental quality.

In a previous study, Halden’s team found significant concentrations of harmful soap-related chemicals dating back to the 1950s in sediments of Jamaica Bay and Chesapeake Bay, into which New York City and Baltimore discharge their treated domestic wastewater, respectively.

Upon their use, triclosan and triclocarban are absorbed through the skin and hence contaminate human blood, urine and even breast milk. Ultimately, these chemicals together with the pharmaceuticals we use end up in our sewage and surface waters. In 2002, the USGS published a landmark study that showed 80 percent of 139 streams sampled from across 30 U.S. states were found to contain measurable levels of organic wastewater contaminants. The human health risks associated with these personal care product chemicals are still not fully understood despite them being used for decades.

In the ASU study, river, creek and lakebed sediment samples from 12 locations upstream and downstream of wastewater treatment plants were analyzed for the presence of antimicrobial compounds.

For Halden’s team, which consisted of postdoctoral researcher Benny Pycke and environmental engineering graduate student and first author Arjun Venkatesan, the results showed that overall concentrations of triclocarban were three- to 58-times higher than those of the more frequently monitored triclosan.

“We were able to detect these two compounds both upstream and downstream of suspected input sources, and the levels of the antimicrobial soap ingredient triclocarban were usually higher compared to triclosan,” said Venkatesan. “Although triclosan is used in a larger number of formulations and personal care products, we found triclocarban to be more abundant in freshwater environments.”

The team also found degradation products of TCC but transformation of this antimicrobial is known to be very slow in natural environments.

“Also, we expected to find these compounds mostly downstream of wastewater treatment plants; but when we consistently found detectable levels upstream and downstream, we realized that there are probably multiple sources contributing to the contamination of these sites, potentially including additional wastewater treatment plants further upstream and runoff from sites where antimicrobial-laden sewage sludge had been applied,” Venkatesan said.

“Every site is essentially downstream of something,” added Pycke. A site in the immediate vicinity of a wastewater treatment plant near Duluth (St. Louis Bay at Lake Superior) had the greatest concentration of triclocarban and its lower chlorinated derivatives, and the Duluth site and Shagawa Lake site had concentrations three times higher than river and creek sediments. There was a strong correlation between the level of contamination with wastewater treatment plant discharge, stream flow and the population density of the surrounding region.

“As the name suggests, these antimicrobial compounds (triclosan and triclocarban) are incompatible with biological wastewater treatment infrastructure paid for with tax dollars,” said Halden. “Municipalities in Minnesota and across the U.S. work hard using state-of-the-art equipment to keep our freshwater environments clean but they cannot control what consumers, misled by aggressive marketing, discharge into  the sewage collection system.”

Wherever antimicrobial personal care products are in use, water and sediment have been contaminated, a situation that certainly is not unique to the state of Minnesota.

“Regulatory agencies are aware of the overuse of antimicrobials, but no state or federal restrictions have been implemented yet for either triclosan or triclocarban,” said Halden. “Aside from ecological concerns, widespread environmental occurrence of antimicrobials also is a potential public health concern because unwarranted use of antimicrobials can promote drug resistance of human pathogens.”

Halden’s research is developing engineering solutions to clean up environments impacted by antimicrobial compounds. However, he emphasizes that the best solution right now in combating this pollution is for consumers to limit their use of antimicrobial personal care products that, ironically, provide no measurable health benefits to the average consumer, as determined by an expert panel convened by the Food and Drug Administration in 2005.

For this project, ASU was supported by funding from the National Institute of Environmental Health Sciences.

Concerts, plays, nationally known authors and art installations are among the artistic attractions this fall at ASU's West campus.

The fall 2012 arts events season at ASU’s West campus, with the theme “experience.the.new,” will feature concerts, plays, performances, nationally known authors, and art installations. The wide variety of artistic events reflects the rich artistic and cultural life on the West Valley campus, anchored by the Interdisciplinary Arts and Performance (IAP) program in the New College of Interdisciplinary Arts and Sciences.

“We have planned a diverse selection of events and activities to entertain and enlighten ASU students, faculty and staff as well as members of our surrounding communities,” said Jeff Kennedy, campus artistic director. 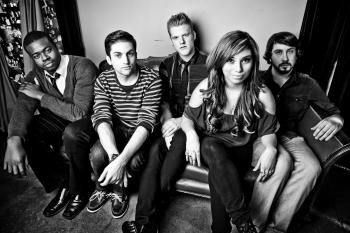 In the experimental arena, John Cage’s 100th Birthday Party will celebrate the work of this seminal 20th century composer and theorist about art, with performances of his unique work, including the radio drama “The City Wears a Slouch Hat” (7:30 p.m., Sept. 5) and "Travelon Gamelon," the 30th anniversary of IAP professor Richard Lerman’s work for amplified bicycles (4 p.m., Sept. 27).

Pentatonix is the wildly popular a cappella group that won Season 3 of NBC’s “The Sing-Off” and whose new recording debuted at No. 1 on the iTunes Pop charts. Penatonix is selling out concerts around the country. ASU’s West campus is the group’s only stop in Metro Phoenix on their first national tour (7 p.m., Sept. 21).

Two celebrated authors will visit campus this fall. Best-selling author of “A Long Way Gone,” Ishmael Beah will recount the riveting story of his childhood in Sierra Leone where he was forced to serve as a child soldier and ultimately found a life of redemption and hope (7 p.m., Sept. 18). Beah’s appearance is presented in conjunction with New College’s ThinK (Tuesdays here in the Kiva) series.

National Book Award winner Maxine Hong Kingston, author of “Woman Warrior” and many other celebrated books, will speak about her recent work guiding U.S. war veterans to take their experiences and write their way to personal peace (7 p.m., Nov. 1).

As a campus where cultural diversity is celebrated on a continuing basis, the West campus will welcome the Calle 16 Mural Project to create a new mural with students, designed by the group’s brilliant artists, and will mark its completion with a Fiesta that also celebrates Hispanic Heritage Month. The outdoor event will feature performances by folklorico, mariachi, flamenco and salsa groups, and delicious food (6:30 p.m., Oct. 5).

The campus installation gallery, ArtSpace West, will present Chicago-based artist Paula Palmer’s “constructed” photos, unique digital art titled “The Four Elements” opening at 6 p.m., Aug. 28 (running through Sept. 21); “Call and Response: War and Peace,” art work created by students and faculty in response to this year’s academic themes, opening at 6 p.m., Sept. 25 (running through Oct. 19); and “nests,” an interactive installation using a 3-D games that explores the places we live by IAP professor Barry Moon, opening at 6 p.m., Oct. 23 (running through Nov. 9). ArtSpace West is open to the public from noon to 5 p.m., Mondays through Fridays and located in the University Center Building, room 228. Admission is free; visitor parking is $2 per hour.

Many of the upcoming events and performances are free of charge; others have an admission fee. More information about the season can be found online at campus.asu.edu/west/events, on Facebook, or by calling the Arts Information line at 602-543-2787.