Editor's Note: This article originally appeared in the March 2012 edition of ASU Magazine.

It doesn’t take a lot of work to figure out that there was something special about Nina Murphy. It only takes a few phone calls to some of her former students at Arizona State University. Tell them you want to talk about “Murphy’s Girls” – the loose gathering that occurs every year around Homecoming to honor her – and you’re golden. 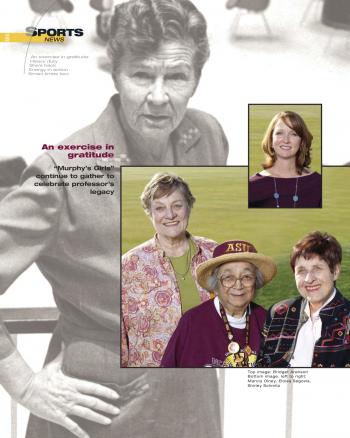 A few samples of the reactions:

“About Nina Murphy? You can talk to me anytime.”

“The minute you said, ‘Murphy’s Girls,’ you had me. It was like throwing a line and getting the big fish.”

It is, and a lasting one. Most of these women, these "Murphy’s Girls," are in their 70s and 80s. Most attended Arizona State College before it became a university, including a few who call themselves "the ’49ers," because they graduated in 1949.

But the impression made on their lives by Nina Murphy, a coach, professor and guiding force behind the women’s physical education department from 1924 to 1969, remains as strong as ever.

The institution that became ASU during her tenure matured during her years here. She arrived fresh from an Iowa teacher’s college and accepted a $15-a-month job coaching girl’s basketball at Tempe Normal School in 1924. One of her colleagues in the early years was Sara “Sallie” Davis Hayden, the daughter of Charles Trumbull Hayden, who was a founder of both the City of Tempe and the normal school that grew into Arizona State University.

Murphy became head of the women’s physical education department in 1936, and made full professor in 1949. When she retired in 1969 after 45 years of service, she left behind an excruciatingly well-documented history of her department covering the period from ASU’s founding until her retirement.

Murphy’s students remember her as a force of nature in the P.E. world.

“She was a special lady,” says Eloisa Segovia, 84, who is among the '49ers. “She was almost an institution here way back when.”

Way back when, indeed. Most of Murphy’s Girls arrived on campus long before women’s athletics were a thriving enterprise at ASU, or any other college. This was before women at ASU won national championships in golf, softball and track. This was before such a thing even seemed possible. This also was long before Title IX, the landmark legislation that ensured women would have equality in sports and other areas of education.

“I don’t think anyone would disagree that Coach Murphy and her fellow female coaches – including Anne Pittman, Mary Littlewood and others – shaped female athletics for not only the Sun Devils, but for many other female teams of their time and the future,” said Bridget Arenson, the associate director for membership benefits and events for the Sun Devil Club.

But however large Murphy’s role in establishing women’s athletics and physical education, for someone like Marcia Olney, who found college daunting, her impact was much more personal.

“I signed up to be a (physical education) major,” Olney said. “My first class was Introduction to Physical Education, and Miss Murphy was the professor.” Murphy didn’t alleviate all of her concerns, exactly. She just made sure those concerns were dealt with.

“She had a way of keeping an eye on people so that we didn’t fall through the cracks.”

If that sounds a little vague, perhaps that’s because, in addition to her administrative duties, Murphy played a different role in the lives of different women. For Olney, it was helping her feel like a part of a group – in this case, other physical education majors.

Murphy was what brought them together.

“You can’t put your finger on it,” said Shirley Schmitz, a 1949 graduate, who is now 84. “Her capability in getting to the bottom of your problems was extraordinary. ... She could be tough. She could be kind. She could be placid. She was strong in her purposes. She was very much an individual who took an interest in how you were doing in your other courses besides the ones with athletics.”

Many of the women who studied under Murphy went on to work as teachers themselves. Others took different paths; Schmitz, for example, became a successful entrepreneur.

Time and distance, as they often do, would separate the women. Then, according to Segovia, in 1987, with the help of the Alumni Association and fellow Murphy’s Girl Karen Maglich, they started getting back together. Invitations went out to a homecoming gathering. That first year, at the old Holiday Inn on the corner of Rural Road and Apache Boulevard, about 25 of “Murphy’s Girls” reunited. After moving their reunion from place to place, they settled on the Karsten Golf Course, where they have met for the last few years to socialize, catch up on news, and honor the woman who influenced them so much, so long ago.

“Those were happy times,” Olney said. “It’s human nature to seek out good stuff. The reason we get back together is to remember the good times.”

And, of course, to remember Murphy.

Personalized medicine expert Joshua LaBaer of Arizona State University has been elected as president-elect of the U.S. Human Proteome Organization.

Personalized medicine expert Joshua LaBaer of Arizona State University has been elected as president-elect of the U.S. Human Proteome Organization. A founding member, LaBaer will become the sixth president of U.S. HUPO, serving from 2014-2016.

“Proteome” refers to an entire set of proteins expressed by a genome, or genetic blueprint. So it follows that proteomics – a blend of the words protein and genomics – is the large-scale study of proteins. Unraveling human protein functions is essential to developing medical care based on each individual’s unique genetic profile.
LaBaer is director of the Virginia G. Piper Center for Personalized Diagnostics and chair of the Biodesign Institute directorate. LaBaer’s team works to discover and validate biomarkers – unique molecular fingerprints of disease – that can provide early warning for those at risk of major illnesses, including cancer and diabetes.
Upon coming to ASU in 2009, LaBaer was named the first Piper Chair in Personalized Medicine. Before that, he served as director of the Harvard Institute of Proteomics.
A board-certified physician in internal medicine and medical oncology, LaBaer has contributed more than 112 original research publications, reviews and chapters.  LaBaer is the editor of the Journal of Proteome Research. He also serves as co-chair of the steering committee for the National Cancer Institute’s Early Detection Research Network and serves on a number of government and industry scientific advisory boards. Last year, he was honored as a Health Care Hero Researcher/Innovator for his discoveries in breast cancer detection by the Phoenix Business Journal.
LaBaer earned doctoral and medical degrees from the University of California School of Medicine, San Francisco.
In addition to his appointments at the Biodesign Institute, Joshua LaBaer is a professor in ASU’s College of Liberal Arts and Sciences, Department of Chemistry and Biochemistry.
Biodesign Institute Bioscience