A tradition at Arizona State University’s West campus that dates back to 1991 will continue at 11 a.m, Jan. 21, as Charles St. Clair re-enacts Martin Luther King Jr.’s most famous speech. The public is invited to attend this free event on the campus at 4701 W. Thunderbird Road in Phoenix. Visitor parking on campus costs $2 per hour.

St. Clair, a faculty member in ASU’s New College of Interdisciplinary Arts and Sciences, will deliver the “I Have a Dream” speech as part of the West campus’s annual March on West event. Approximately 500 local middle-school students will gather at the campus’ Paley Gates to reenact the 1963 March on Washington, which provided the setting for King’s speech. 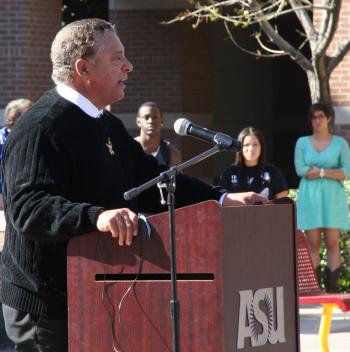 “It’s an honor to share this unforgettable speech with a group of young people,” St. Clair said. “You never know who will be inspired to do great things by hearing Dr. King’s powerful message of harmony among all people.”

Sixth- through eighth-graders from local elementary and middle schools will arrive on the West campus in the morning and participate in educational sessions focusing on the civil rights movement during the 1960s. They will then meet at the Paley Gates to reenact a civil rights march, ending in the Kiva courtyard of the Sands Classroom Building, where St. Clair will deliver the “I Have a Dream” speech.

Students from Valley high schools also will participate. The march will be led by the drum corps from Independence High School, and the vocal ensemble from Moon Valley High School will perform during the program.

St. Clair, an Emmy Award-winning actor and director, has served as an ASU faculty member since 1990. He is a recipient of the Promoting Inclusiveness Award from the city of Glendale, Arizona. Active in the entertainment industry locally and nationally, as a director and lighting designer for stage productions including “Race,” “A House with No Walls,” “August in April,” “The Colored Museum” and “Topdog/Underdog,” St. Clair has also appeared in numerous films and television commercials.

At the West campus, St. Clair teaches classes in acting, directing and technical production for the School of Humanities, Arts and Cultural Studies in ASU’s New College.

For more information about the March on West, call (602) 543-5300 or email westevents@asu.edu. The event is presented by the MLK Events Committee on the West campus in collaboration with the Committee for Campus Inclusion.

Information about MLK events and activities on all ASU campuses may be found at asu.edu/mlk.

Arizona State University's Center for Science and the Imagination and Project Humanities will present the latest installment of the Science Fiction TV Dinner series on Jan. 22, featuring one of the stars of the TV series "Dollhouse," Harry Lennix.

Arizona State University’s Center for Science and the Imagination and Project Humanities will present the latest installment of the Science Fiction TV Dinner series at 6 p.m., Jan. 22, at the Marston Exploration Theater on ASU’s Tempe campus.

The event, focused on the television series "Dollhouse," will feature one of its stars, Harry Lennix,* whose credits include the films "Man of Steel," "Ray," "The Matrix: Reloaded" and "Revolutions," and NBC's new hit series "The Blacklist."

The event is free and open to the public, with reservations requested through dollhousetvdinner.eventbrite.com. Dinner and beverages, including a vegan option, will be provided for free to attendees.

The Science Fiction TV Dinner series is a launch pad for imaginative, engaging conversations about science, technology, art and society. Founded in 2012, the series has developed an enthusiastic following on and off campus, providing the opportunity for people of all ages and backgrounds to come together, learn and explore visions of the future in an entertaining and informal setting. Previous events have featured episodes of popular science fiction shows, such as "The Walking Dead," "Star Trek" and "The Jetsons."

This installment of the series will feature a screening of “Ghost,” the premiere episode of "Dollhouse," created by celebrated screenwriter, director and producer Joss Whedon ("The Avengers," "Firefly," "Buffy the Vampire Slayer"). The series imagines a future where neuroscience enables human personalities to be uploaded, reconfigured and downloaded into brains – or erased entirely. It wrestles with the ethical implications and technical challenges of “mind-wiping” while following the adventures of a group of clandestine operatives (“Dolls”) who are neurologically programmed to complete secret missions for wealthy clients.

Lennix plays the character Boyd Langdon, an ex-police officer and one of the “Handlers" who monitors and coordinates the activities of the Dolls. He stars alongside Eliza Dushku, who plays the series’ protagonist, Echo, as well as Fran Kranz, Tahmoh Penikett and Olivia Williams.

Following the screening, Center for Science and the Imagination assistant director Ruth Wylie will moderate a conversation with Lennix and Mary Lu Bushnell, a neuropsychologist at the Phoenix VA Medical Center and an appointed member to the Arizona Governor’s Council on Spinal and Head Injuries.

“The Science Fiction TV Dinner series uses compelling stories as a gateway to important issues in science and technology, as well as ethics and society,” says Wylie. “I’m excited to talk with Harry Lennix and Mary Lu Bushnell about the imagination and artistry that goes into creating "Dollhouse's" vision of the future, and the emerging neuroscience that underpins that vision.”

“Project Humanities is excited to be partnering again with CSI, this time in bringing back to ASU a dear friend and colleague, the accomplished Harry Lennix, who appreciates what we are doing to underscore the value of humanities and the arts in a moment where they still, for too many, seem afterthoughts, rather than essentials to our everyday living,” says Neal A. Lester, founding director of the award-winning Project Humanities.

For more information about the event and to register, visit dollhousetvdinner.eventbrite.com.

*Update, Jan. 21: Lennix will be joining this event via Skype due to an unexpected change to the shooting schedule for his TV show, NBC's “The Blacklist.”