“Fifty-eight Holes” is an ancient board game that, like today’s Snakes and Ladders or Candyland, pits opponents in a race to the finish. Archaeologist and alumnus of ASU’s School of Human Evolution and Social Change Walter Crist found and studied one ancient setup of the game that people drilled into a rock surface likely thousands of years ago.

Though games such as this helped pass the time, they also played an important role as a kind of cultural intermediary. 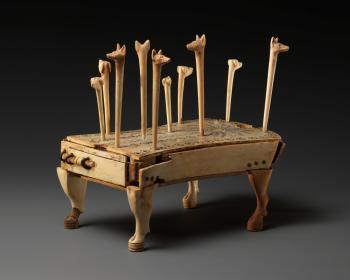 This ivory Fifty-eight Holes board was dug up by Howard Carter, in 1910, out of a pit tomb in Thebes. Photo from The New Yorker site, courtesy of The Metropolitan Museum of Art.


“Games function socially as a way for people to interact with one another,” Crist said. “People will play games when they vaguely know each other, to get to know one another.”