SPARKY, SUNDVL, DVL4LF, ASUONE, AZST8T, UDEVL. Sun Devil fans across the county have been displaying their ASU pride on license plates for years. Now the ASU Alumni Association wants those same ASU fans to participate in the "What’s On Your Plate?" contest, rewarding the most creative personalized license plate with an ASU theme.

The contest will have two categories: one for those in Arizona who have an official ASU collegiate plate, and a second category for Sun Devils with an ASU-themed personalized plate living anywhere in the country. The first place winners of the Arizona version of the "What’s On Your Plate?" contest will receive two tickets to a suite in Sun Devil Stadium to watch the Duel in the Desert as the Sun Devils take on their UofA rivals on Nov. 19, as well as a Sparky Car Kit filled with ASU logo items for a vehicle. Winners of the ASU-themed license plate contest will win a $100 gas gift card and a Sparky Car Kit. The first two runners up in each category will receive a Sparky Car Kit. 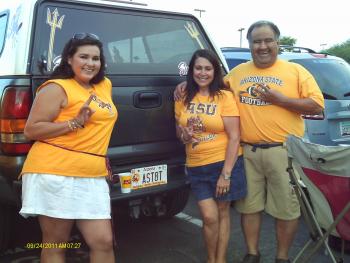 Beginning Sept. 26, ASU fans can enter the "What’s On Your Plate?" contest by sending photos to sparkyplates@asu.edu. The contest will run through Oct. 29, the day of ASU Homecoming 2011. Then from Nov. 1 to 7, Sun Devil fans will be able to cast their vote for their favorite plate in each of the two categories. Winners will be announced on Nov. 14 during Beat UofA week.

Since ASU rolled out its newly redesigned all-gold license plate last year, sales increased 30 percent with more than 14,000 Sparky plates on Arizona roads. The redesigned plate also allows for six character customization, up from five in the previous design, to offer the ultimate display of personal ASU pride.

Christine K. Wilkinson, president of the ASU Alumni Association, explained that $17 of every $25 charged by the state for the license plate is allocated to the university’s Medallion Scholarship fund. The Medallion Scholarship program gives students who are Arizona residents financial support as well as the opportunity to foster their personal development and leadership skills while attending ASU.

“ASU has a tremendous base of alumni and supporters here in our state, and every Sparky plate on the road generates funding for a scholarship program specifically for Arizona students,” said Wilkinson. “We hope many Sun Devil fans show us their creativity and school support by participating in this contest.”

Hundreds of ASU Medallion Scholarship recipients have benefitted from the funds generated by proceeds from the Sparky license plate since it first hit Arizona roadways in 1989. The current Medallion Scholarship program is comprised of 103 current ASU students majoring in fields that include business, engineering and liberal arts, among many others. Twenty-three of those students will graduate in May 2012.

For more information or to order a Sparky license plate, visit www.sparkyplates.com or contact the Motor Vehicle Division from 8 a.m.-5 p.m., Monday through Friday by calling 602-255-0072 (Phoenix), 520-629-9808 (Tucson) or 800-251-5866 (throughout Arizona). Individuals with an existing Sparky license plate may replace it with one featuring the new design for a $5 exchange fee by visiting a local Motor Vehicle Division office.

Let the battle of wits begin

It's time to showcase your knowledge and stand for your college at the 2011 ASU Academic Bowl.

Let the battle of wits begin

This man identified four functions of the mind: thinking, feeling, sensation and intuition. 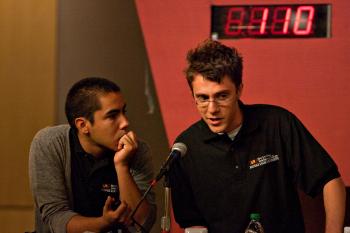 Kudos, if you were able to answer this question correctly. And if the answer came to you immediately, then consider yourself a potential threat in the whip smart world of academic competition.

Returning to campus Oct. 3-6, the ASU Academic Bowl is a way to foster school spirit among ASU students and possibly usher them into national quiz bowl competitions.

The ASU event has become a smart-alecky staple of the fall semester – a time of year when nearly 100 undergraduate students step into the spotlight to show off their knowledge and the college that helped give it to them for a chance to win scholarship money and another kind of knowledge.

Answer: The kind that makes you act smug around fellow classmates.

The high-level academic competition matches the style of the classic American quiz show and pits teams, comprised of four students, against each other in a fast-paced round of question-and-answer trivia that covers everything from political science to pop culture.

The competing students hail from all over the world and are majors in disciplines ranging from climatology to industrial design. Their ability to think fast and buzz in quickly also will be tested, as well as their ability to recall old television shows, past political debates and popular music of bygone eras.

"We have a well-rounded team that is calm under pressure," said Zachary Kovach, a secondary education-physics major from Cleveland, who will be representing the Mary Lou Fulton Teachers College at this year's competition.

When asked how he is preparing for the event, Kovach said simply: "I'm not. I know what I know." In his free time, Kovach said he likes to skate, plays drums, collect rocks and volunteer at the Arizona Science Center.

James Martell, an industrial design major from Bettendorf, Iowa, said he is training for competition by visiting trivia websites and watching "Jeopardy!" Jamie Tellez, his teammate on the Herberger Institute for Design and the Arts team, is an Arizona native also studying industrial design. She said that one of her strengths is her age.

"As an older student, I have had a little more time to accumulate knowledge than most of my competitors, and this is helpful with certain types of questions," she said.

When asked how she is preparing, Tellez said that she has been focusing on her weak areas: science and math.

"I noticed in practice that there have been many questions in the past dealing with the periodic table, so I'm trying to re-familiarize myself with that," said Tellez, who enjoys writing music, playing music, creative writing and watching football. "Go Devils!"

In recent years, the College of Liberal Arts and Sciences Gold and Maroon teams have dominated the competition. The only other colleges to get a taste of victory are the Ira A. Fulton Schools of Engineering and the W. P. Carey School of Business.

For a list of competing colleges at this year's ASU Academic Bowl, in addition to details about the event, visit asu.edu/academicbowl.

All events are free and open to the public – smarty-pants and know-it-alls welcome.