Three weeks ago Amanda Tachine received a phone call from a blocked number.

“At first I thought it might have been a telemarketing call and so I hesitated for a second,” Tachine said. “But something inside told me, ‘Mandy, you’ve got to pick up this phone. It could be important.’” 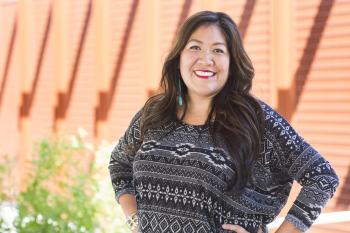 Arizona State University postdoctoral scholar Amanda Tachine (pictured at the Center for Indian Education at the Tempe campus Sept. 8) is being recognized for her work with Native American students at a White House "Champions of Change" event this week in Washington, D.C. Photo by: Deanna Dent/ASU News Download Full Image

It most certainly was. The call was from the White House. They wanted Tachine and her family to come to Washington, D.C., and pick up a national award.

Tachine, a postdoctoral scholar at ASU’s Center for Indian Education, will be one of 11 young women honored Sept. 15 as “Champions of Change” by the White House in the Office of the First Lady. In addition to honoring the group for empowering their communities, the goal of the event is to inspire girls and young women to recognize their potential for leadership as educators, advocates, artists and entrepreneurs.

Among her other efforts with Native students, Tachine’s work on a two-tiered college-access mentoring program caught the eye of those organizing the Washington event.

“Amanda is a gift, and her work as a Champion of Change is fitting,” said Bryan McKinley Jones Brayboy, President’s Professor, director of the Center of Indian Education and ASU’s special adviser to the president on American Indian Affairs.

“She is engaged in changing not only the ways that institutions engage first-year American Indian students but also the ways that we think about their challenges. Amanda is forcing us to engage these students as resources, trendsetters and those to whom we should listen to most closely.”

Before coming to ASU in August, Tachine was the former leader of Native SOAR (Student Outreach, Access and Resiliency) in Tucson. It was there where she fostered relationships between Native American graduate students and staff to encourage and represent Native American undergraduates, who in turn provide mentorship to high school students.

“A lot of blame is put on Native Americans that they’re not strong enough, savvy enough, economically smart enough to get the resources to go to college,” said Tachine, who is from Ganado, Arizona, considered the heart of the Navajo Nation.

As the child of a single-parent household, Tachine said she can identify with many of the Native American students she encounters. Her mother was a teacher and hinted of tough financial times. Her grandparents and aunt pitched in to help whenever they could, and they stressed that education was the only solution to a better life.

“My passion has always been to help my community and my people. That teacher has always been tucked away inside of me,” Tachine said. “The feeling grows stronger as I get older now that I have two kids, nieces and nephews. I’m constantly asking, ‘What can we do to help our little ones?’ I don’t want them to have the hurdles that I went through because I know they still exist.”

When Tachine returns from the East Coast, she hopes to continue advancing ideas and strategies for Native American student success.

Another Sun Devil being honored at the "Champions of Change" event: Diali Avila, who graduated from ASU with a bachelor's in nonprofit leadership and management from the College of Public Service and Community Solutions, currently works as an Affordable Care Act organizer at Planned Parenthood, helping families understand and get enrolled. Diali is also a DREAM Act advocate and a founding member of the Isac Amaya Foundation, an organization that focuses on raising awareness for higher education and raising money to award scholarships to low-income students and undocumented students.

For students who grow up speaking some Spanish or for some who have a working grasp of the language, a normal Spanish class wouldn't be challenging enough. ASU's Spanish heritage language program addresses that need with classes that focus on larger concepts.

Editor's note: This story is part of a series of stories to mark Hispanic Heritage Month, which runs Sept. 15-Oct. 15.

Nobody in Craig Mahaffy’s family speaks any Spanish, so it might seem odd that he is enrolled in the Spanish heritage language program in Arizona State University’s School of International Letters and Cultures. 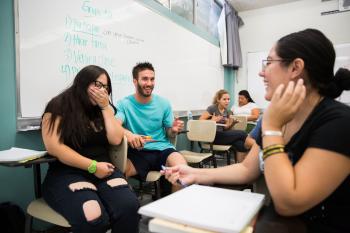 Business major Craig Mahaffy makes fellow students Maria Alejandra Felix (left) and Maria Fernanda Felix laugh as he describes his use of music to build his Spanish skills during an ASU Spanish heritage language course on Aug. 27 on the Tempe campus. The courses are meant to help native speakers and others with a firm grasp on the language to polish their skills. Photo by: Deanna Dent/ASU News Download Full Image

The junior in business with a focus on global politics said he discovered the program — aimed more at native speakers or those who already have a firm grasp on the language — when he found general second-language Spanish classes weren’t challenging enough for him. He had picked up the language while dating a girl from Mexico whose mother spoke only Spanish.

“I would make us speak only in Spanish for like a month just so I could practice it,” said Mahaffy said of that relationship.

That’s one of the things Spanish heritage class instructor Roberto Ortiz Manzanilla loves about the program: He said the heritage classes are a great mix of people from different cultures, including Spanish-speaking countries and American Spanish speakers.

Secondary education junior Hayden Ballesteros is a native Spanish speaker, having come to the United States from Panama as a child, and was excited to find the heritage program at ASU:

“It made me feel a lot more comfortable because I definitely was not looking forward to sitting through a class of how to say ‘hola,’” Ballesteros said.

Sara Beaudrie, associate professor of Spanish linguistics and head of the Spanish heritage language program, said it’s the mission of the program to “promote Spanish language development and maintenance in the Southwestern United States.”

“Unfortunately a lot of [Spanish heritage program students] grow up ashamed of speaking Spanish and are forced to speak only in English. … A lot of them are already losing the language,” she said. “This program gives them the opportunity to regain those skills that they once had.”

“Heritage learners’ needs are different from traditional second-language learners, who have not been in constant contact with Spanish while growing up,” Beaudrie said. “We offer these separate courses as a recognition of heritage learners’ unique abilities and needs within our classrooms, and as a way to expand our Spanish-speaking community at Arizona State University.”

That’s important to students like Ballesteros, for more than one reason: “This program allows us to build on the knowledge we already have,” while also acknowledging the importance of the Spanish language in today’s society.

“Spanish is one of the most spoken languages throughout the world. I can almost guarantee you that you will meet at least one person a month who only speaks Spanish, and it is an awesome feeling to be able to connect and communicate with that person on a different level,” said Ballesteros.

The School of International Letters and Cultures is a unit of the College of Liberal Arts and Sciences.