Six Arizona State University students spent a week in June conducting airborne research in low gravity under the guidance of scientists and engineers at the National Aeronautics and Space Administration’s Johnson Space Center in Houston.

They’re members of the ASU Dust Devils, one of 14 teams of students from universities throughout the United States selected from among more than 60 teams that applied to do experiments as part of NASA’s Reduced Gravity Educational Flight Program. 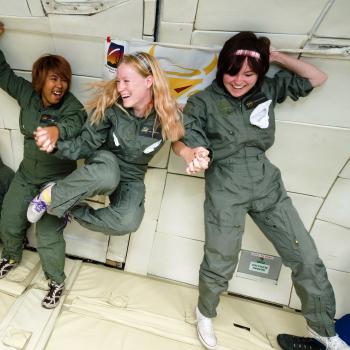 Each of the teams’ projects required performing experiments in low gravity – or “microgravity” – conditions. The work was done during flights in a modified Boeing 727-200 jet used to train astronauts that is capable of creating microgravity conditions. The aircraft is sometimes called the Weightless Wonder.

Microgravity is the extremely weak gravitational force that is experienced, for example, by people in a spacecraft orbiting the Earth, enabling them to become virtually weightless and to float inside a spacecraft.

From dust to solar systems

In flights over the Gulf of Mexico, the Dust Devils were looking at dust electrification and coagulation – how dust particles clump together and bond in low-gravity environments.

Understanding the ways in which dust particles stick together could be important in revealing the fundamental process that allows solar systems and planets to form, says Dust Devils member Amy Kaczmarowski, who graduated in the spring with a degree in aerospace engineering from ASU’s Ira A. Fulton Schools of Engineering.

The team varied the size and composition of dust particles placed inside 12 vacuum chambers containing different combinations of particles of three materials – silica, aluminum and a material believed to be similar to dust on the surface of Mars.

The idea was to examine how varying the size and composition of the particles would affect clumping.

As microgravity was achieved on the jet, each vacuum chamber was shaken to unsettle the dust it contained. Cameras monitoring activity in the chambers then recorded the behavior of the dust. Some experiments required multiple flights to complete.

It took some self-discipline for team members to keep focused on the experiment amid the excitement of experiencing microgravity.

“It was an absolutely incredible feeling to be floating,” Kaczmarowski says. “It was difficult to keep steady. I was having a lot of fun,” she says.

The team was able to make the trip to Houston by writing an experiment proposal that earned a grant from the NASA Space Grant program, which supports students studying areas of science, engineering and math with applications to space-exploration endeavors.

Another proposal got the students equipment and additional funding from Kip Hodges, director of the School of Earth and Space Exploration. The team raised more funds for research equipment and travel expenses from family and friends, and from private donors who contributed in response to local news media reports about the Dust Devils’ project.

Assistant professor Groppi advised them on engineering aspects of the project, including design of research instruments, and on writing of the research proposal and the project budget. Professor Saripalli supplied some computers and computer software.

Learning the art of experimentation

Besides performing experiments, the Dust Devils toured the Johnson Space Center, during which they got a look at a replica of the Space Shuttle Explorer.

“We learned a lot from this experience, from better ways of designing future experiments to make them easier to handle and work with, to learning how to work with different types of people.”  Kaczmarowski says.

“We know we were successful in creating the vacuum system, moving the dust, and collecting images during the flight,” Kaczmarowski says.

Now Danielle Hoots will spend the summer performing the bulk of the analysis of the data collected during the Dust Devils’ experiments.

The team is expected to issue a final report to NASA later this summer on the results of the experiment. The report will analyze the experiment’s effectiveness and scientific findings.

Team leader Zaw will be looking at opportunities to obtain future support from the NASA Space Grant program and working to recruit new Dust Devils members to help carry on the team’s work next year.

An ASU student team's performance in an international innovation competition will boost its project to bring water-treatment technology to people in Bangladesh.

Mark Huerta will be one of only 20 college students selected from around the world to participate in the Dell Summer Social Innovation Lab for leaders of social entrepreneurship projects.

The Arizona State University senior biomedical engineering major is one of only several participants to be awarded a full scholarship to cover the nearly $5,000 cost of attending the lab from July 14 through Aug. 4 near Boston. 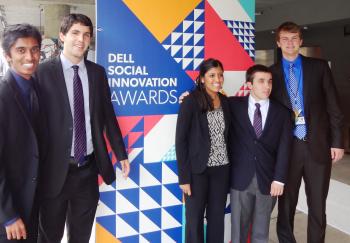 The opportunity arose through the 33 Buckets project, which won Huerta and four fellow ASU engineering students a spot in the final round of the international Dell Social Innovation Challenge in June at the University of Texas at Austin.

The team was one of only five to earn a place in the finals – from among approximately 1,700 teams worldwide that initially entered the student competition.

The team is designing and building a water-filtration system for use in rural Bangladesh, where water contamination – particularly from arsenic – is a significant cause of health problems, including diseases.

The system is to first be used by a local school for girls and be capable of providing up to 4,000 gallons of clean water a day – giving the school an extra 2,000 gallons that could be sold to residents of the village to raise funds for school repairs and for maintaining the filtration system.

33 Buckets team members made a trip to Bangladesh recently to do field work in preparation for implementing the project.

Competing at the Dell Challenge finals against teams of students from prominent universities such as Stanford, Duke, the Massachusetts Institute of Technology and Harvard, among others, 33 Buckets team members came well prepared “and they met the high-stakes, high-pressure challenge” said Richard Filley.

Filley is the director of the Engineering Projects in Community Service (EPICS) program in the Ira A. Fulton Schools of Engineering. The 33 Buckets project grew out of ideas generated in the EPICS program.

Teams at the Dell Challenge went through several rounds of presentations on their projects, followed by question-and-answer sessions with judges.

For its performance, the team will receive mentoring over the next year from engineers and entrepreneurship experts with the Dell computer technology corporation.

33 Buckets also won $5,000 to help fund future travel needed to advance its project. The team will also receive about $5,000 worth of technology from Dell to use for its project, including a laptop, desktop computer and camera.

At the event, team members got to meet well-known entrepreneurs such as John Mackey, the founder of Whole Foods, the founder of Texas Disposal Systems founder Jim Gregory, Dell Challenge co-founder Peter Frumkin and the founder of Dell computers, Michael Dell.

“It was great for networking,” said team member Varendra Silva, a senior biomedical engineering major. “They made us feel like we were being initiated into the Dell Social Innovation Challenge family.”

The team plans to complete a final design for its water-filtration device and produce the next prototype by the end of the year, and then return to Bangladesh next spring to set up the filtration operations.

The effort should be aided by lessons Huerta learns at the Summer Social Innovation Lab.

Presented by the Transformative Action Institute, the three-week tutorial will provide students guidance in their endeavors from experienced business developers, investors, educators, project designers and managers, and  experts in a range of other fields.