On the 8th day of giving, offer support to a vet, military service member

Day 8
Offer support to a veteran or military service member.

The university greatly appreciates and honors those who have served in defense of our country. ASU’s Pat Tillman Veterans Center is a way to give back to our military by offering support to ASU’s student veteran and active military population.

Arizona State University has been named a “Military Friendly School for 2013” by G.I. Jobs magazine for four consecutive years. The list honors the top 15 percent of colleges, universities and trade schools that are leaders in providing educational support benefits and paths to success to military veterans.

ASU also has been named one of the top 10 universities for veterans in 2011 by Military Times Edge magazine.

The 1,739 colleges, universities and trade schools on this year’s list exhibit leading practices in the recruitment and retention of students with military experience.

In 2011 the university opened the Pat Tillman Veterans Center on the Tempe campus to connect veterans with academic and support service, as well as assist with certifying educational benefits.

Additionally, ASU was chosen as a University Partner for the 2012-2013 academic year in support of the Tillman Military Scholars program, which provides scholarships for active and veteran service members as well as their spouses.

In 2008 the Pat Tillman Foundation established the Tillman Military Scholars program, dedicated to supporting educational opportunities for service members and their families by filling the financial gaps in the Post-9/11 G.I. Bill. The Tillman Military Scholars program covers not only direct study-related expenses such as tuition and fees, but also other needs, including housing and child care.

Veteran enrollment has risen to 1,727 students in 2012.  There are currently 2,323 students at ASU who are receiving educational benefits, doubling the number since fall of 2009.

Freshmen showcase solutions for change at Solve for X event

More than 100 freshman teams from the CTI 101 course gathered to display the first stages of their Solve for X solutions.

Freshmen showcase solutions for change at Solve for X event

More than 100 freshman teams from the CTI (College of Technology and Innovation) 101 course gathered to display the first stages of their Solve for X solutions. As part of the CTI 101 class, students were asked to pitch a solution to a challenging problem on or off campus through a poster or other visually creative display and test their presenting skills to students, faculty and staff.

“CTI students are problem-solving and working on real-world challenges from day one their freshman year,” said Mitzi Montoya, vice provost and dean of CTI. “Solve for X is about identifying a problem, proposing a solution and presenting and pitching your idea to your peers.” 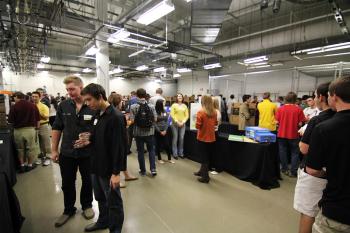 Students selected their own team members and were asked to collectively identify all areas of a challenge, including providing evidence as to why a problem is important, identifying prospective stakeholders and laws that affect the problem, and implementing a plan that will solve the issue.

“We met once a week in our CTI class, but we met during the whole semester to discuss our project,” said Thomas Schoknecht, an engineering major, who collaborated with graphic information technology (GIT) major Kyle Pendley and aviation major Addam Cigarroa to create an idea for housing insulation made from recycled pet hair. “We didn’t have much to go off of, but we really came up with this idea fast.”

Project topics varied, from stuffed animals made of recycled pet hair to a device that erases ink from paper using a laser. While some students do not intend to actually create their idea because of financial limitations or time constraints, many students had viable ideas that they intend to produce.

Freshmen Guillermo Cruz, CTI engineering major, and Kile Halliday, GIT major, have aspirations of making it big on campus through a student-led broadcast news program that could potentially be featured on ASU’s television channel.

Halliday currently works at the Student Union and sees the challenges of students knowing about all the events on campus.

“Someone came up to me once and said, ‘Hey, did you go to the event last night?’ and I had no idea there was even an event going on. I even work at the Student Union where I hear about events all the time,” he said. “If we had a system like this, more students would know what is going on around campus in a fun and entertaining way.”

Halliday and Cruz hope to start a club that can finance their idea.

“It’s happening at the downtown campus. Why can’t it happen here?” Cruz said.

College students across the nation are plagued by space limitations in their dorm rooms so four students came up with a solution to address that problem. GIT major Christopher Halkovic, engineering major Aaron Padfield, applied computer science major Michael Christy and engineering major Ryan Seeley created a prototype of a television mount designed for dorm room beds. Made from a light plastic material, the device keeps flat-screened televisions securely mounted to the rails of a standard dorm room bunk bed.

“We currently have two models that are in the works,” Padfield said.

Halkovic says their design will free up wall space for students who have wall space limitations, create a dual-screen setup with a computer, and will eliminate the need for wall repairs because of marks left by traditional wall mounts.

The team is currently in the process of meeting with resident advisors who will work with the team on final design and possibly approve the device for use at ASU housing.

Arizona has the second-highest skin cancer rate in the world, according to a 2011 article featured in the East Valley Tribune. Applied biological sciences major Megan Moore and engineering major Seana O’Reilly hope to change that number with their sunscreen dispenser design.

“How easy would it be to simply press your hand to a dispenser for a small amount of sunscreen before exiting a building?” Moore said. “The amount of people who do not wear sunscreen is staggering, and it’s even more difficult for men to use it because they don’t have a way to carry it like women do in their purses.”

The team has plans to meet with Well Devils representatives and hopefully come up with a plan that will allow for sunscreen dispenser installation around ASU campuses.

Many elementary schools lack funding for hands-on education, but applied biological science majors Mariah Patton and Wyatt Western discovered a solution that would allow for the introduction of kinesthetic learning in schools across the nation. Their solution calls for the implementation of a curriculum easily taught by ASU students who will teach simple concepts that allow for hands-on experimentation.

“Studies show that even two hours of hands-on education can result in improved test scores in the areas of math and science,” Patton said. “CTI teaches hands-on learning. Why isn’t everybody else doing it?”

The team focused on education in elementary-aged students because of the lack of extracurricular activities.

“In junior high and high school, you have science club, debate team, choir, academic decathlon, and so many other activities for students to develop various interests,” Western said. “K-6 schools lack that exposure to extracurricular activities. This program will help younger students develop interests in STEM.”

The team said many schools lack the time, finances and energy to teach hands-on learning, so they suggest recruiting ASU or other college students to teach kinesthetic learning two to three hours a week to small groups.

“There are three ways we can go about recruiting these students: schools can require it for credit, give students extra credit for participating, or students can fulfill community service requirements,” Patton said.

Students interested in carrying their ideas through to next semester were able to discuss improvements and gather feedback from fellow students and faculty advisors during the Solve for X event.

“We are remaking the higher education experience for our students – one that is focused on ‘making’ from freshman year all the way through graduation,” said Montoya. “By starting these hands-on projects early in their college career, our students will continue to engage in research and design that matters and has community impact.”

Written by Sydney B. Donaldson, writer for the College of Technology and Innovation