Her first overseas trip has come courtesy of a prestigious scholarship from the US-UK Fulbright Commission. 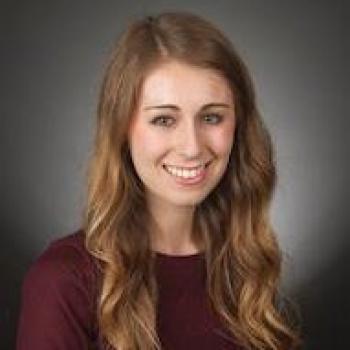 Kaleigh Johnson, an Arizona State University chemical engineering major and student in Barrett, the Honors College, will spend four weeks at the University of Exeter, where she will explore climate-change issues, among other topics. Photo by: Kaleigh Johnson Download Full Image

Johnson is one of five ASU students who have been awarded scholarships to participate in the 2015 Fulbright Summer Institute in the United Kingdom. Like Johnson, the other four also are Barrett Honors College students.

The US-UK Fulbright Commission is the only bilateral, transatlantic scholarship program offering awards and summer opportunities for study or research in any field at any accredited U.S. or UK university. The commission is part of the Fulbright program established by U.S. Sen. J. William Fulbright in the aftermath of World War II to promote leadership, learning and empathy between nations through educational exchange.

“There are only 60 scholarships available, so with these students winning, ASU students will represent 8.3 percent of all 2015 Fulbright UK Summer Institute scholars. That’s a significant achievement,” said Jacquelyn Scott Lynch, Deans Fellow and Honors Faculty Fellow at Barrett Honors College, who assists students with applying for national and international scholarships.

Johnson will spend four weeks, June 27-July 25, at the University of Exeter, where she will participate in Fulbright Week exploring climate-change issues and three weeks at the university’s International Summer School.

“I was thrilled to find out I was selected to attend the University of Exeter. As it will be my first experience with global travel, I am excited to gain a broadened perspective and see what life is like as a university student in the UK,” she said.

“I also hope to learn how universities in the UK are tackling important issues involving sustainability. I hope the knowledge I gain will make me a more well-founded engineer as I continue to research this important field through chemical engineering.”

Brandon Dorr, a biomedical engineering major, will spend June 10-26 at the University of Bristol, where he will study the transatlantic slave trade and its implications on current society.

“As a biomedical engineering major with an interest in economics and trade, the idea of being immersed in the living history of an economic hub such as Bristol will provide an outstanding opportunity to develop as a scholar with a global mind-set," Dorr said.

“I hope to bring my interest in ethical considerations of trade practices into discussion, while studying alongside accomplished students from all over the United States.”

Brittney McCormick, a biological sciences major, will also go to the University of Bristol, where she will learn about the history and culture of Bristol and the UK, including the relevance of 18th-century slave trade and smuggling, and explore the specific role Bristol has played in U.S. history.

Esch is NASA Space Grant undergrad research intern and has been working on computational models to study the co-existence and competition of mirror life-forms in the emergence@asu group. At the Summer Institute she will study Scottish history and identity, health and society in modern Scotland, and science and technology.

Jane Cadwalader, who is majoring in art and museum studies, will go to Nottingham Trent University on July 6-31 to participate in an academic program that examines local culture, history, architecture, fine art and museum and heritage studies.

Phoenix Mercury vice president Ann Meyers Drysdale was one of four speakers at a workshop sponsored by the ASU School of Community Resources and Development that sought to equip those who work with young athletes with the tools to have positive impact.

“He only had three rules,” she said. “Don’t criticize your teammates. Don’t be late. And no cursing.” 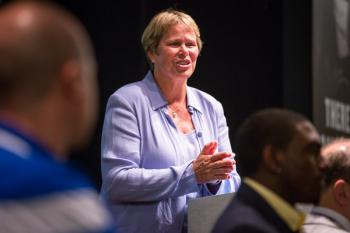 Meyer explained the importance of each of those rules to attendees of a youth sports leadership and ethics workshop held this week at the ASU Carson Student Athlete Center. She was one of four speakers on a panel of sports professionals that included Sandra Day O’Connor high school coach Matt King, former high-school All-American wide receiver Cameron Colvin and Laurel Prieb, vice president of Western operations and special projects for Major League Baseball.

“These are the people we need to be listening to, not the few who get in trouble,” moderator Denise Meridith told the audience.

The workshop was sponsored by the ASU School of Community Resources and Development in the College of Public Service and Community Solutions. ASU Athletics and the Phoenix-based nonprofit Linking Sports and Community, run by Meridith, helped organize the event. It was funded by a Super Bowl Host Committee Foundation grant aimed at enhancing the lives of youth and families through education, health and wellness.

“Young athletes can learn important values, ethics and life lessons from their engagement in youth sports,” said workshop organizer Kathleen Andereck, director of the School of Community Resources and Development. “It is therefore imperative that adults working with young athletes understand the extent to which they can influence lives, and have the leadership tools to have positive, meaningful and long-lasting impact.”

The workshop sought to do just that.

Sandra Day O’Connor high school basketball coach Matt King spoke about the approach USA Basketball takes to developing kids who are part of the Give & Go Hoops program. As director of basketball operations for Give & Go, King said the goal is to teach kids how to have fun, how to be in safe environments and how to develop – not only as people, but as productive individuals.

“We’re using basketball from a different perspective to some degree,” King said. “Not from a career vocation, but an opportunity to teach life skills so they can be productive later in life.”

Staying focused on a goal

Scottsdale real-estate executive Cameron Colvin spoke about overcoming adversity. By age 16, both of his parents had died. And his best friend was murdered just as the two were preparing to leave the Bay area to play football at the University of Oregon. During his last year in college, Colvin began having a breakout year when something unexpected happened again.

“My senior year I was leading the Pac-10 in receiving,” Colvin said. “And I had a conversation with my godfather the night before one of my games and I told him I feel fortunate I haven’t gotten hurt during my college career. The next day I shattered my ankle.”

Colvin never played another game for the Oregon Ducks. He graduated with a degree in business and was signed as a free agent by the San Francisco 49ers the next year. Colvin said he worked hard to overcome his injury, but his ankle never recovered.

That’s where his education came into play. Colvin said he focused on academics in school and took advantage of internships during summer breaks. He simply transferred the work ethic he had for sports and academics into building a career outside sports. He now runs a real-estate development company based in Scottsdale.

“Stay focused on your goal,” Colvin said. “Always keep your goal in mind.”

The need for integrity

Laurel Prieb has spent 38 years in professional baseball.  Fourteen years with the team he grew up rooting for, the Minnesota Twins, 14 years with the Milwaukee Brewers and the past 10 years for Major League Baseball at its Western region office in Phoenix.

He reminded attendees that those involved in sports are human and make mistakes no matter what the motivation.

“People fall short and sometimes it’s the people who run the sports, oftentimes its people who play the sports,” Prieb said. “Whatever it is, we’re all human and we all have our shortcomings.”

He underscored the importance that sports plays in society today by pointing out that many families come to watch games or that nursing-home residents listen to every pitch on the radio,

“It means so much to so many people,” Prieb said. “Sure, it’s only a game, but it's much more than a game for the difference it makes in peoples lives."

That’s why Prieb said it’s so important to maintain the integrity of a sport, to be respectful of others and to have “ethics that go beyond what you would just do otherwise.”

The panel discussion capped off a daylong program June 2 that featured several speakers. Retired Army Lt. Gen. Benjamin Freakley, a professor of practice of leadership at the ASU School of Public Affairs, talked about how to develop ethics at an early age.

Sandra Price, a lecturer in the ASU School of Community Resources and Development and executive director of the American Academy of Pediatrics Arizona Chapter, discussed balancing the need to win in sports with maintaining the best interest of young athletes.

And Eric Legg, assistant professor at the ASU School of Community Resources and Development, worked with attendees on how to develop a transformative leadership style that inspires athletes.

“Young athletes are tremendously impacted by their coaches, recreation leaders and other adults with whom they interact as part of youth sports programs,” workshop organizer Andereck said. “Dr. Legg’s research has found that this impact is enduring, remaining with an athlete for years to come.”

Those who attended the workshop came away with valuable information.

“I coach a Little Athletes program,” said Queen Creek recreation technician Nia Fanaika. “So, I’ve got a lot of useful techniques on how to gain leadership and how to teach student-athletes the ethical and right way to approach sports.”

Erica Perez, a special-event coordinator for the town of Queen Creek, said what she learned from the workshop will help her as an administrator.

“Although I don’t coach youth sports anymore, I supervise staff like Nia who oversee the youth programs, so I really wanted to come to see how I can be a support system to her,” Perez said.

“I liked the panel discussion and the different topics on the ways to empower your team, ways to motivate your staff and how I can help them to achieve their goals.”