On the 11th day of giving, improve the health of animals

Day 11
Help improve the health of animals in your area. 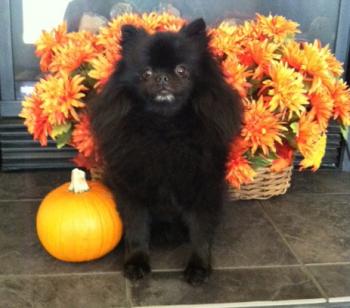 Recently her experiments in the kitchen have led her down a path to perfecting the ultimate culinary canine treat – the homemade all-natural dog biscuit – giving Karaczan’s black Pomeranian dog, Jake, more reason to wag his tail.

Also benefitting from these wholesome treats are ASU’s proud pet owners and their furry friends, who nearly bought out Karaczan’s entire supply of dog treats at the sixth annual Winter ArtFest, Nov. 29, on the Tempe campus.

Valley animal shelters have something to wag about too, as they have received 100 percent of the funds from Karaczan’s sales.

Both delicious and nutritious, Karaczan’s dog biscuit recipes grew out of a concern for the increasing number of unhealthy animal byproducts she noticed in the food that made up most, if not all, of Jake’s diet.

“You eat junk food and feel terrible. Byproduct is all fat and sugar,” says Karaczan, an information specialist in ASU’s media relations office. “I wouldn’t feed myself that junk.”

She switched dog food brands, but Karaczan still had trouble finding some healthy alternatives for dog treats. So she decided to make her own.

“I did some research and bought some recipe books for dogs. At first, it was hit or miss,” she says. “Jack would eat the treats, but after two of them he was finished.”

Following the advice of Michele Bledsoe in "The Small Dog's Doggy Bone Cookbook" – a favorite of Karaczan’s – she started experimenting with the recipes in the book and making them her own. After testing them out on Jake, she discovered some keepers.

Among the flavors that have been “Pomeranian-tested and approved,” pumpkin, cheese and chicken dog biscuits are guaranteed to please terriers and retrievers alike, and also come highly recommended by Great Danes, according to a friend of Karaczan’s.

“Now, Jake eats all the treats I give him,” she says. “With the old treats, he would hide them around the house. With these, he sits down and eats them right away. He’s also lost half a pound.”

“The best part is that I know exactly what is in them, and they all contain less than 10 ingredients,” she adds.

But there’s more to these treats than just taste. Karazcan said she wanted to be able to do something with the treats, so she decided to help an organization that could benefit animals. Currently, her all-natural dog biscuits – and proceeds from their sales – are helping the Maricopa County Animal Care & Control provide for the cats and dogs they shelter.

“They’re not making a profit and they house so many cats and dogs,” says Karaczan. “They are a no-kill shelter but once they are full, there is no guarantee they won't send the animal to a kill shelter.”

Although Jake, who is five years old, came from a breeder, Karaczan says she will adopt a shelter or rescue dog from now on.

“So many people pay breeders $500 to $600 for dogs, and shelters need it more,” says Karaczan, who, in the last month, has raised close to $150 for Maricopa County Animal Care & Control to use however they choose.

Giving to animal shelters is great, adds Karaczan, who plans to help even more animal organizations through her dog biscuit sales. “Lots of animal shelters have a wish list so you can give them the things they need.”

Karaczan says a healthy dog also needs to exercise, “so try to take your dog for a walk as much as possible,” she says.

She also advises never to give pets as gifts, unless you are certain that the person you’re giving the pet to really does want it. Often, she says, in these scenarios, the pets get turned in to a shelter, or worse, are neglected.

“Adopting and rescuing a dog is the way to go,” Karaczan says. “If you want a specific breed, there are different rescue groups for specific breeds. It’s the best of both worlds. It may not be a puppy, but it’s still a dog that needs love.”

For all dog biscuit inquiries, contact Natasha Karaczan at natasha.karaczan@asu.edu.

On the 12th day of giving, help feed the hungry

Celebrate the season with ASU's "12 Days of Giving," leading up to Dec. 25 when the Sun Devils will help fight hunger in San Francisco, as part of the Kraft Fight Hunger Bowl.

On the 12th day of giving, help feed the hungry

Day 12
Enlist your football team to feed the hungry. 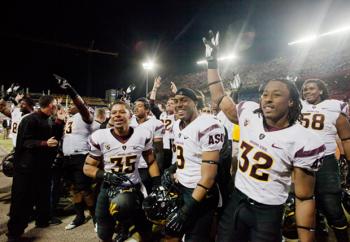 ASU football players aren’t just focusing on the game in San Francisco when they play in the Kraft Fight Hunger Bowl, Dec. 29. They’ll also be spending part of Christmas day feeding those in need from 11:30 a.m. to 1:30 p.m. (Pacific time) at the Glide Memorial Church and Kitchen, 330 Ellis Street, San Francisco.

"Playing in the Kraft Fight Hunger Bowl is a great opportunity for our football program," says Steve Patterson, vice president of Sun Devil Athletics. "However, it also offers us an ideal chance to give back to the community, especially during the holidays when no one should be without food."

There will be locations for food drop off at men's basketball games and at the Carson Student-Athlete Center, as well as Old Main and the Memorial Union on the Tempe campus.

"As a prominent part of the Phoenix community, it is important for ASU to use its resources to help those in need," says Rick Shangraw, CEO of the ASU Foundation for a New American University. "We hope that students, faculty, alumni and fans, among others, will show their support for a great cause."

Christine K. Wilkinson, president of the ASU Alumni Association and senior vice president and secretary of the university, said the drive is a wonderful opportunity for ASU fans to balance the excitement of the bowl game with the generous giving for which the university community is known. She noted the ASU Alumni Association leadership held its own food drive in support of the initiative.

"Sun Devil spirit goes beyond cheering for the maroon and gold as they take to the gridiron," Wilkinson said. "The food drive is an opportunity for the ASU family to demonstrate its passion for stepping up to meet a community need.

"This food drive serves as yet another example of ASU's commitment to social engagement and playing a vital role in leveraging place. The university is proud to partner with United Way to combat chronic hunger for 82,000 households in Maricopa County, and champion ending hunger across our state."