The heightened politicization of the U.S. Supreme Court could lead to more distrust if the public doesn’t view the court’s rulings as just and fair.

That’s one of the observations from Cronkite School Professor and media law expert Joseph Russomanno’s new book “The 'Stench' of Politics: Polarization and Worldview on the Supreme Court.” The book examines the court’s growing partisanship, the consequences of the public rejecting the court and potential solutions for depoliticizing the court and restoring equal justice under the law. 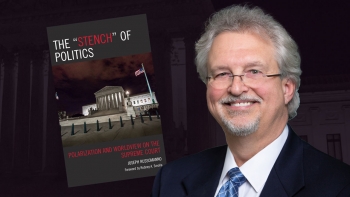 “I knew from the beginning that I wanted to examine polarization in the United States, but I sought a sharper focus,” Russomanno said. “I combined that inspiration with a lot of scholarship that I read and processed to develop a new approach to analyze and understand the Supreme Court — a political institution in a divided, polarized nation.”

The e-book is currently available, and the print version will be available Nov. 30.

The book’s title and certain aspects of the book were inspired by a statement made by Justice Sonia Sotomayor during oral arguments of an abortion law case that was appealed to the Supreme Court last year.

“Will this institution survive the stench that this creates in the public perception that the Constitution and its reading are just political acts?” she asked during a hearing in December 2021 to uphold a Mississippi abortion law.

In anticipation of the book’s release, Russomanno discussed these topics, along with what led to the current state of the Supreme Court and its gradual shift in ideology.

Question: When did these partisan changes in the U.S. Supreme Court begin to take place?

Answer: It’s been a gradual development, and I suppose we could point to several or at least a few places in history as perhaps key moments in the development, if not the start. One certainly is the Roe v. Wade decision by the court in 1973 that legalized abortion rights.

We also start to see the seeds of it especially taking root in the 1980s, if you look at the nomination and confirmation process of Supreme Court justices and the attention that was brought to them. The confirmation hearings once upon a time were not on live television for much of their duration. They also used to be of a much shorter duration. Since the 1980s, there have been a number of events that coalesced around that time. One of them was the advent of cable television. So we had a lot more television choices, and communications technology continued to expand. And then of course we have the corollary of how the confirmation hearings were used. And they became very much a political process. Some would call them now, and for the last several years, a political circus.

Q: How does this begin to affect our democracy?

A: American public opinion of the Supreme Court is the lowest it’s ever been, and confidence that the American people have in the Supreme Court is as low as it’s ever been. So why is that? Well, a number of reasons, but among them is when you have an institution that not just occasionally but consistently strays outside of what the majority of the public believes is proper and fair, then those people are going to start losing faith in that institution. If the public just starts rejecting what the court says the law is and finds ways around the rulings, then a pillar institution of this democracy will have failed.

Q: What are some solutions to help the court become more bipartisan?

A: We can’t do anything about the fact that the president nominates justices. That’s in the Constitution. But, what we could do is form a bipartisan commission to advise the president on who he or she ought to select as nominee. Second is, when it comes to confirmation hearings, my suggestion is to not televise them anymore. Journalistic coverage yes, but not with television cameras.

With regard to the court itself, these suggestions are not original. In 2021, there was a presidential commission on the Supreme Court that studied the court and a variety of things about it. And it is among the bodies that have suggested the two things I’m about to mention. That is, enlarging the court. It’s currently nine justices. Enlarge it to, for example, 13 or 15. And it can be done in a way that, over the next several presidential terms, each president gets to nominate one person to fill these new vacancies.

In addition, you still would only have nine justices hear each case, but you would select nine out of that larger group per case. Currently, the U.S. Supreme Court is the only federal appeals court in the United States where every judge who is on staff hears every case. In the federal appeals courts, there are several judges who are employed, but only three selected per case, most of the time. So why not do that here?

There’s a whole new world of undergraduate research opportunities available to online students thanks to the Online Undergraduate Research Scholars (OURS) program from The College of Liberal Arts and Sciences and EdPlus. The Interplanetary Initiative is one of several units supporting ASU Online students to grow academically and professionally by providing group-based research opportunities and ...

There’s a whole new world of undergraduate research opportunities available to online students thanks to the Online Undergraduate Research Scholars (OURS) program from The College of Liberal Arts and Sciences and EdPlus. The Interplanetary Initiative is one of several units supporting ASU Online students to grow academically and professionally by providing group-based research opportunities and mentorship.

This fall, the Interplanetary Initiative supported 18 online students working across six of its interdisciplinary research projects. Their research spans topics from bringing Mars down to Earth to using space for promoting peace. 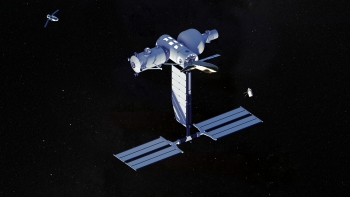 Annika Diaz, who is double majoring in sociology and women and gender studies, works on the JEDI (just, equitable, diverse, and inclusive) Space project.

“What drew me to the opportunity is the fact that it was based around two of my interests, one being space, which was the most eye-catching. But also that it had to do with diversity, equity, inclusion and accessibility, which is the focus for both of my degrees,” Diaz said.

Emulating the interdisciplinary nature of these research projects, the online students participating this semester represent 11 different ASU majors — from astronomical and planetary sciences to anthropology and the Interplanetary Initiative’s own technological leadership degree.

Alby McInnis, a senior graduating this summer with a degree in family and human development, is also working on the JEDI Space project.

“I did not realize that there were so many opportunities for someone in a soft science like I am to work in the space sector. This opened my eyes up to the fact that there is so much more to working in space than astronauts,” McInnis said.

Together, Diaz and McInnis have gotten the opportunity to collaborate with the Orbital Reef University Advisory Council to compile research for a white paper on how diversity, equity, inclusion and accessibility can be implemented as a continuous integrated process in space and on Earth.

Each research project is made up of a group of ASU faculty, graduate students and industry professionals. The students taking part in this research experience work in concert with the rest of the group to provide input and research support.

“The project leads are very passionate about what they’re doing, and they’re very welcoming and understanding if you have any questions. You can tell that their whole goal is to make it feasible for everybody to be involved,” said Bianca Michaud, a senior physics major, who is working on the Global Space Tech project.

“I felt like my comments and input were met with an open ear. I had some critical feedback, which made me look at the situation differently while still welcoming me to add or move the project in a different direction,” said Mariah Maury, who is graduating this semester with a degree in political science. She works on the Preventing Space War project.

The unique opportunity for online undergraduate students to be able to do research has been a huge draw to participants.

“I have never heard of a college doing undergrad research remotely. Overall, it was a lot more feasible than I anticipated it being because when things start transitioning to the online modality, you really have no idea how it’s going to go. Being in research professionally right now, I know it’s extremely difficult to get into the field of research, and it is paramount to be able to do this,” said Michaud.

For future opportunities to get involved in Interplanetary Initiative research, email interplanetary@asu.edu or subscribe to the initiative's newsletter.