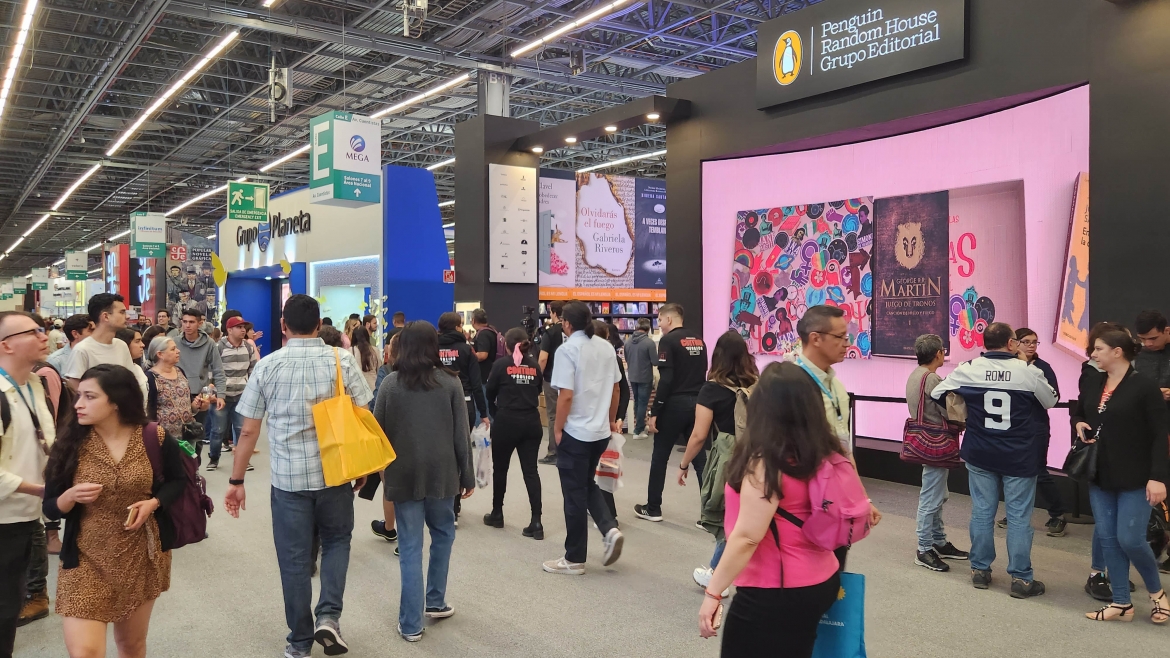 Arizona State University for the first time joined some 2,000 presenters from 47 countries that traveled to Mexico to join this year’s Guadalajara International Book Fair (FIL), held Nov. 26 to Dec. 4 in the Guadalajara Expo.

Founded by the University of Guadalajara in 1987, the FIL is one of the largest book fairs in the world, and this year provided a forum for ASU to showcase its Media Enterprise and the university in general.

The university team engaged the public and provided complimentary copies of “The Worlds We Share,” a curated collection of essays, articles and short stories showcasing the work of the ASU Media Enterprise — a nonprofit, nonpartisan media collective that shares stories about science, technology, the arts and social matters.

“We want our content that comes through the Media Enterprise to be shared with the largest audience possible in lots of different places,” said Mia Armstrong-López, managing editor of Future Tense, one of the Media Enterprise affiliates and a partnership of Slate, New America and ASU. Guadalajara International Book Fair vendors and participants stop by the Arizona State University booth on Nov. 27 to speak about the university and receive a complimentary book of essays, articles and short stories published by ASU Media Enterprise. 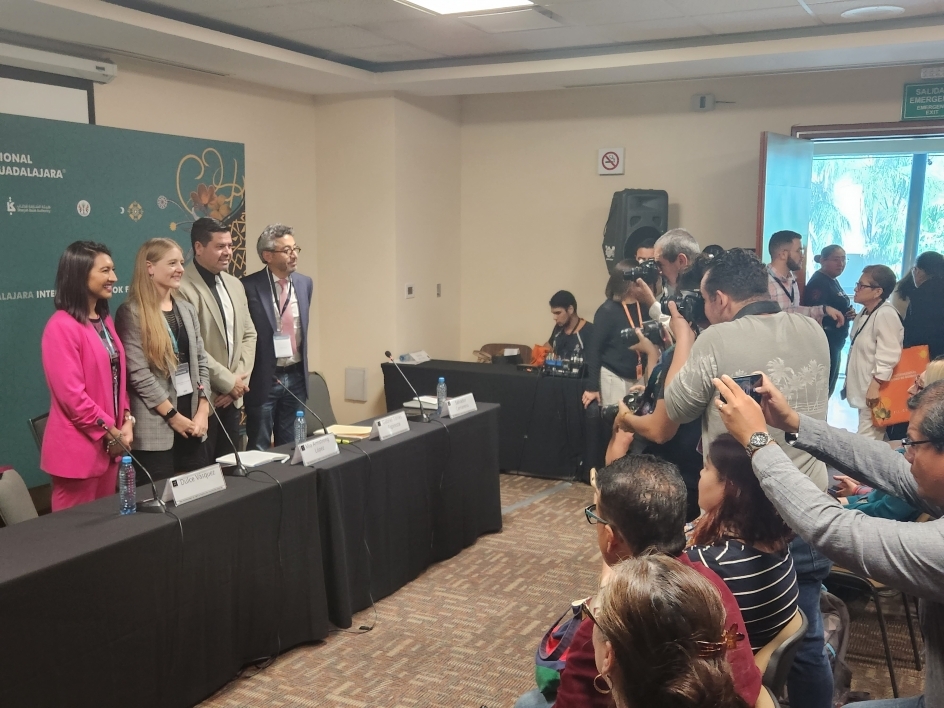 Dulce Vasquez, ASU Office of University Affairs assistant vice president, and Mia Armstrong-López, managing editor of Future Tense, pose for a photo with other panelists after a discussion about digital journalism at the Guadalajara International Book Fair on Nov. 28. 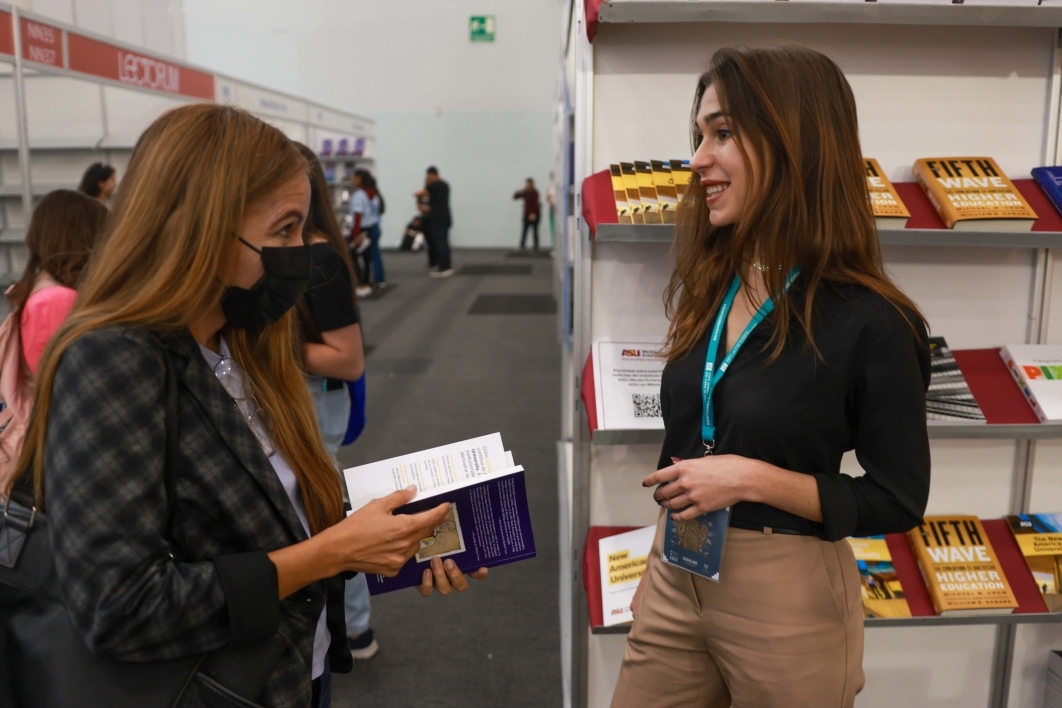 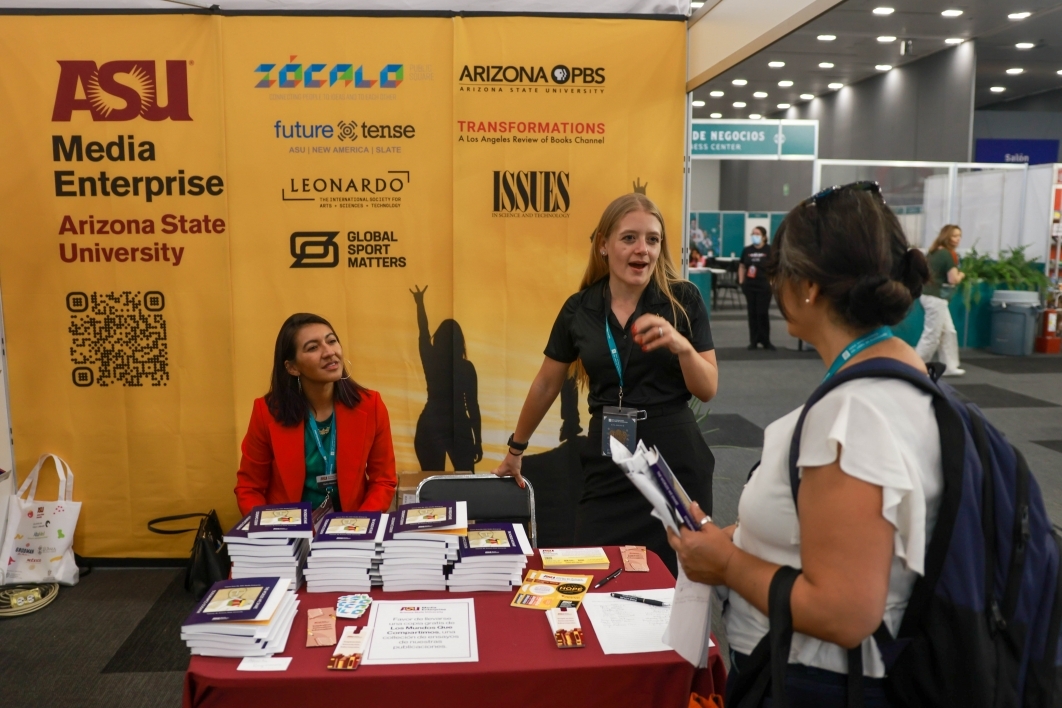 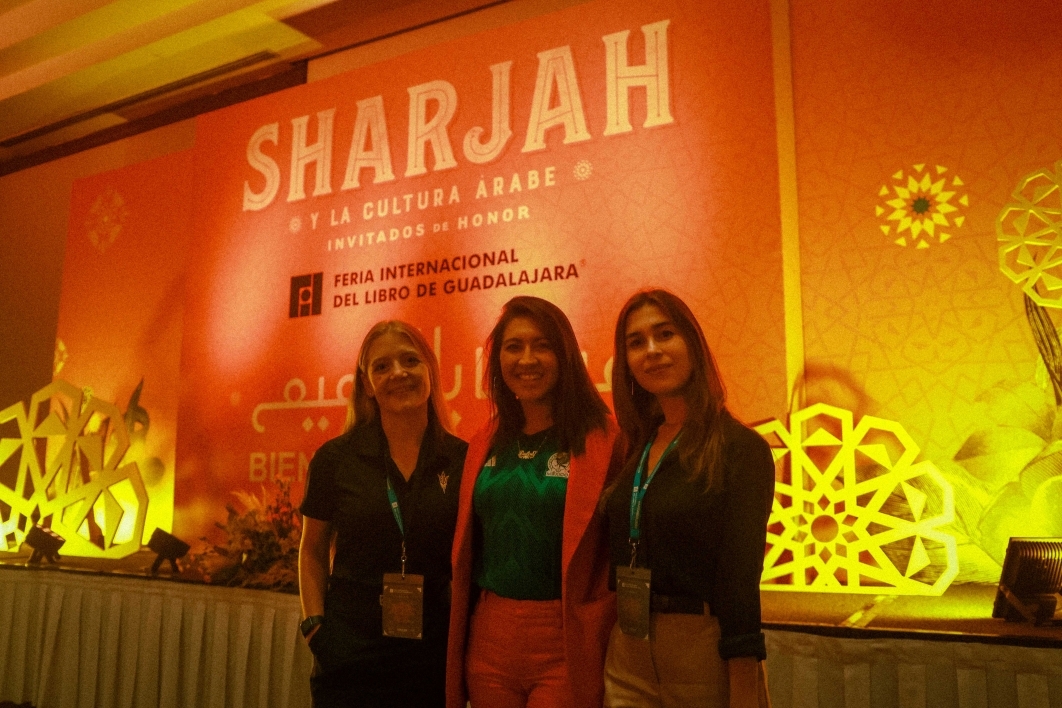 Mia Armstrong-López, Dulce Vasquez and Sara Suarez pose in front of a display for Sharjah and Arab Culture. Sharjah was the Guadalajara International Book Fair 2022 guest of honor.

The book featured English and Spanish versions of each article. Although most of the work was originally written in English for Media Enterprise digital platforms, one piece from renowned Mexican author Juan Villoro was presented in its original form.

“It’s special for us to share the original Spanish story and then our English translation,” Armstrong-López said.

Vasquez and Armstrong-López also shared their expertise during the “Innovation in Digital Journalism” panel, along with Gabriel Torres Espinoza, University of Guadalajara professor and journalist; and moderator Salvador Camarena, journalist and columnist for various top Mexican national journals.

The panelists discussed the challenges of digital communication, including the evolution and impact of social media, dis- and misinformation, government influence in media, freedom of the press, maintaining audiences, and what the future holds in this unique and changing space.

In addition to the digital journalism panel, Vasquez, who is based out of the ASU California Center, also served as a panelist for the "Binational Forum on United States–Mexico Relations: A Perspective from Los Angeles."

The forum reflected on the actions and alliances in politics, economics, education, culture and health that have strengthened the relationship between the two countries and bettered the lives of citizens on both sides of the border. Luis Gustavo Padilla Montes, executive vice president for the University of Guadalajara Foundation USA, moderated the discussion with prominent panelists that included former Los Angeles Mayor Antonio Villaraigosa and legendary civil rights and labor leader Dolores Huerta.

Held in the Guadalajara Expo hall, the FIL occupies the space equivalent of 8.4 acres where publishers, literary agents, distributors, translators and librarians conduct business. The public is also welcome during certain periods where they can participate in over 1,000 hours of scheduled events, including book talks, author meet and greets, diverse panels and other activities.

Event organizers expect over 700,000 visitors during the nine-day event dubbed as “one of the most important cultural festivals in Latin America.”

“It’s a little bit daunting to see a massive maze of bookstores all constructed for one week in one place,” said Sara Suarez, senior manager for programming and operations at ASU Media Enterprise affiliate Zócalo Public Square. “The level of construction, the stands, it’s really impressive. There are hundreds of thousands of people visiting this fair every day. It’s just a huge amount of exposure.

“It’s hard to imagine the scale until you are actually on site.”

In addition to serving as a networking event for the book industry, the book fair celebrates the love of reading and different cultures. To that end, each year organizers designate a foreign nation, state or region as the guest of honor. Special events, displays and focus are placed on the guest of honor to spotlight their achievements, literature and culture.

Sharjah and Arab Culture was named the FIL 2022 guest of honor. Sharjah is the third largest of the seven emirates, part of the United Arab Emirates (UAE). Known as the cultural capital of the UAE, Sharjah has a history as one of the most progressive cities in the region that evolved from fish trading to one of the most developed, modern trading cities in the Persian Gulf region.

The visiting Sun Devils used a fourth-quarter offensive outburst in which they scored 35 points to outlast Grand Canyon on Wednesday night. ... The visiting Sun Devils used a fourth-quarter offensive outburst in which they scored 35 points to outlast Grand Canyon on Wednesday night.