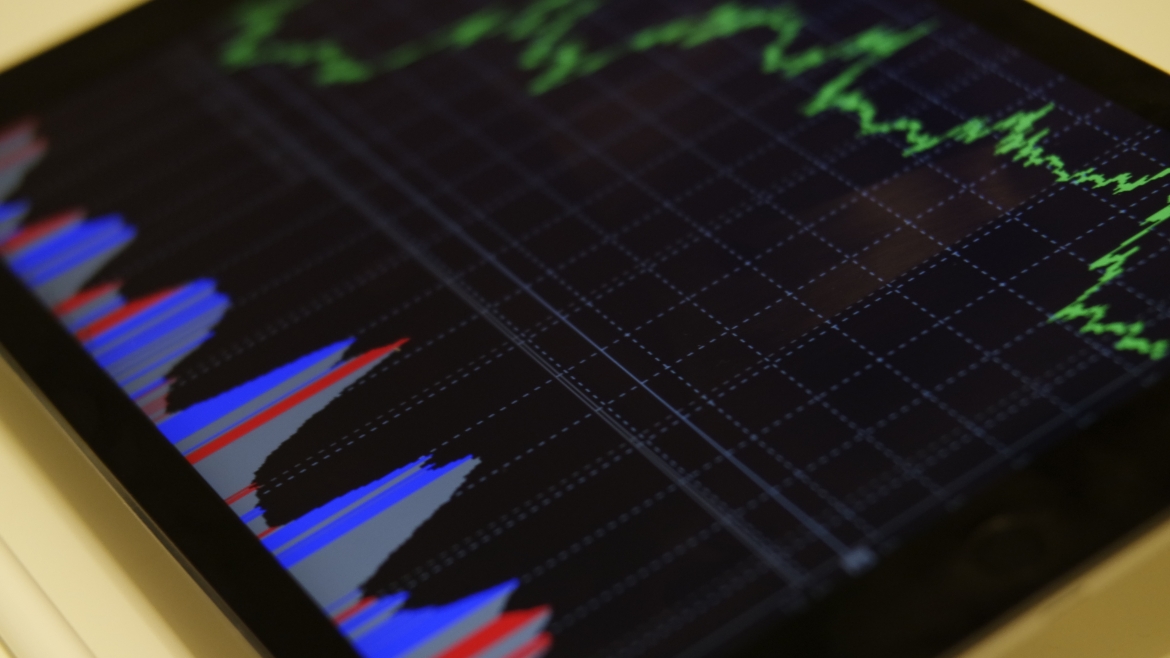 An Arizona State University economist said the Grand Canyon State has managed to withstand the one-two punch of COVID-19 and record-breaking inflation, and a rebound in 2023 is possible. But it may have to gird itself for a recession if the Federal Reserve System gets too aggressive with policy.

“What would that mean if somehow, someway, the Fed were too tight? It would mean tough sledding for Arizona, a hard fall for the economy,” said Dennis L. Hoffman, professor of economics and director of the L. William Seidman Research Institute at ASU’s W. P. Carey School of Business. “It will have harsh and laboring impacts.”

Hoffman presented his findings at the 59th annual Economic Forecast Luncheon on Wednesday in downtown Phoenix, sponsored by the W. P. Carey School of Business and PNC Bank.

“For almost six decades, this luncheon has attracted business and governmental leaders to hear a panel of distinguished speakers, economists, project business conditions for the coming year,” said W. P. Carey School Dean Ohad Kadan, who made his first appearance at the luncheon since joining the school in July. 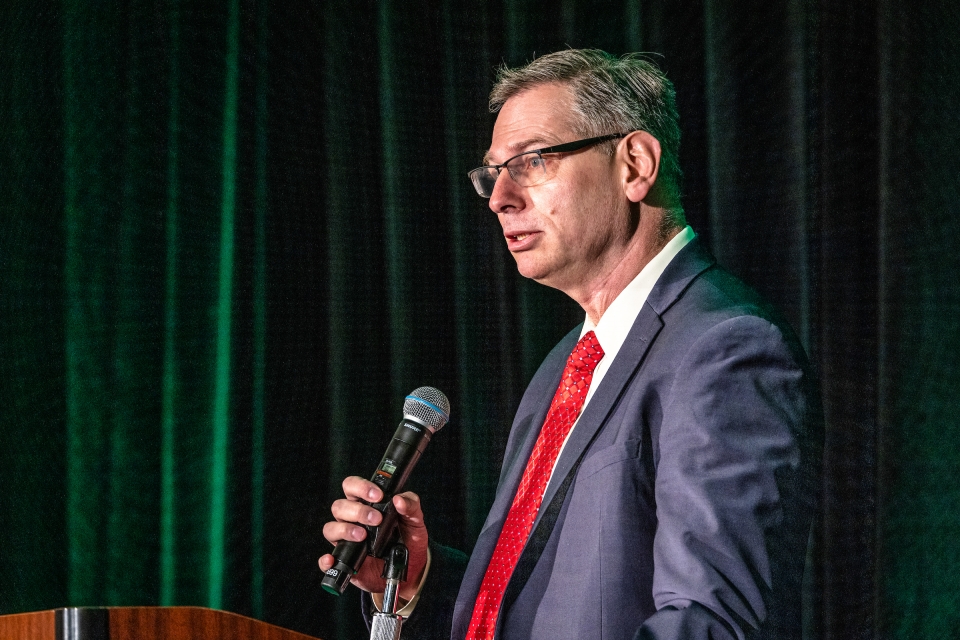 Hoffman said Arizona has recovered from the pandemic downturn before most states because its economy is strong and diverse. Health care, manufacturing, transportation/warehousing and scientific/technology industries are among the strongest in the nation, and unemployment is near a 40-year low.

Pre-COVID-19, Arizona outpaced all U.S. states in job creation and is gaining some ground in getting those jobs back, according to Hoffman. However, the state’s recent employment growth has been slower than the national average and will add over 100,000 jobs in 2022, with 86,000 in the metro Phoenix area.

Hoffman said Arizona sustained the pandemic and continuing inflation because of its business-friendly attitude and remaining as open as possible during the worst of COVID-19.

“We embraced business and recovered jobs faster than most of the nation did,” Hoffman said. “I would say we are still several hundred thousand jobs below trend. And it’s going to be a long time to make that up.”

But Hoffman said aggressive Fed policy might trigger a national recession, bringing higher unemployment rates, reduced job growth and a slowdown in residential building. However, Hoffman believes in the current strength of the Arizona and Phoenix economies; the effect should be milder compared with other states.

He attributes this to the five Arizona industries that ranked among the fastest-growing in the nation:

Hoffman gave special kudos to the manufacturing industry, which was a welcome surprise in the wake of the pandemic.

“Manufacturing is a fantastic story,” Hoffman said, predicting the number of jobs will quickly climb to 15,000. “Many of us thought manufacturing would be tough to bring back to Arizona. And I think that’s a testament to creating a welcoming business climate.” 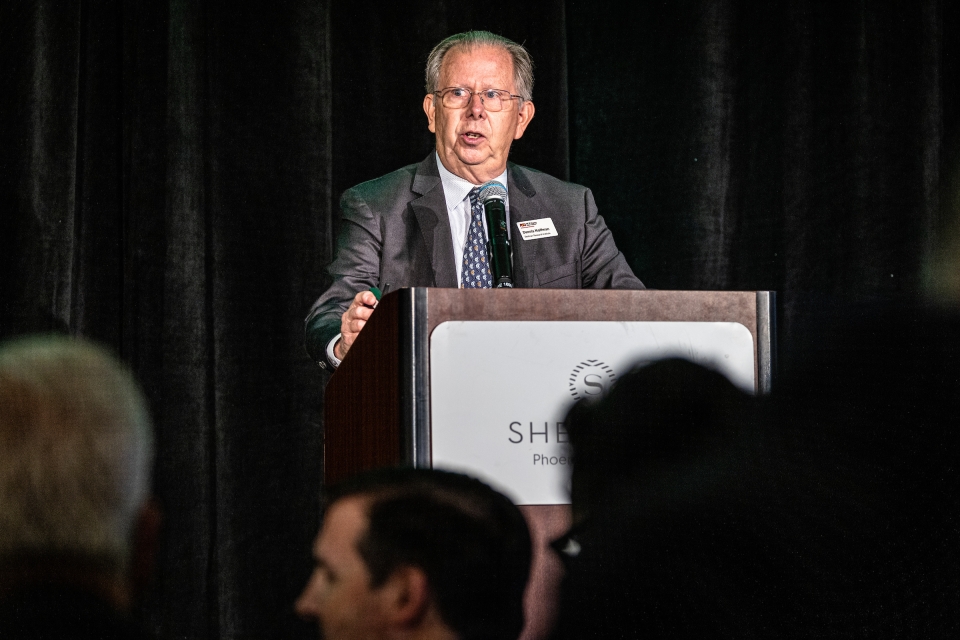 While job growth will take a sharp dip in 2023, the state’s population will also slow down, but not by much, according to Hoffman. He said Arizona ranks as the fourth fastest-growing state and the top three location for domestic movers, behind Florida and Texas.

Income levels, affordable housing, inflation and Fed rate hikes will affect exactly how many people will come to Arizona in 2023 because the state is 50% less affordable than five years ago.

“It’s simple. When you double the mortgage rate, the cost to finance a home dramatically goes up,” Hoffman said. “Millennials are reaching the age where they want to consume housing and it’s increasingly out of reach for them, so this is a concern.”

Home sales have “fallen dramatically” according to Hoffman, costing the state about a billion dollars a month in income.

“That represents a lot of income for people in the real estate community,” Hoffman said.

Hoffman said concerns over climate change, lack of water, women’s rights, education issues and border crisis concerns could play a part in attracting innovative workers, especially those in the tech industry, who can live and work anywhere. His biggest concern is the Fed, whose policies could slow down many markets and could stagnate Arizona into 2024 or 2025, Hoffman said.

Some of those concerns were allayed by Waller, who said the Fed’s main goal was to fight inflation, not create economic problems for the states.

“Slowing down economic growth is necessary to bring inflation back down to our 2% target,” Waller said. “This slowing in activity is a sign that actions taken by the Federal Reserve this year to reduce inflation are working.”

Waller said by boosting interest rates, the Fed can curtail spending and investments by households and investments, which has created a bottleneck for supply.

“Slowing home sales will decrease demand for goods that complement the purchase of a new home and demands for goods, such as new carpet, new furniture, new lawn mowers and so on,” Waller said. “This will put some downward pressure on those prices. Our goal is to rein in demand and supply into better balance.”

Hoffman said that Arizona will prevail through the tough times because of its attitude toward business and commerce.

“Frankly, we have long-term economic advantages in this state. This is a very pro-growth economic setting,” Hoffman said. “This is a state where we’ve traditionally embraced business. We understand that business brings prosperity to the vast majority of people.”

Residents at Mirabella at ASU, a university-based retirement community on the Arizona State University Tempe campus, were paid a special visit recently by the young and curious children from ASU's Child Development Lab. On this field trip, the children and Mirabella residents enjoyed playing, dancing and reading a fall-themed story. The group also munched on popcorn, learned about varieties of co...

Residents at Mirabella at ASU, a university-based retirement community on the Arizona State University Tempe campus, were paid a special visit recently by the young and curious children from ASU's Child Development Lab. On this field trip, the children and Mirabella residents enjoyed playing, dancing and reading a fall-themed story.

The group also munched on popcorn, learned about varieties of colorful leaves and sang along to a guitar and vocal performance from Mirabella musician-in-resident Eiress Wicks, who played nursery tunes like “The Itsy Bitsy Spider” and “Five Little Pumpkins.” A Mirabella resident named Bob Glass accompanied Wicks on his own guitar. 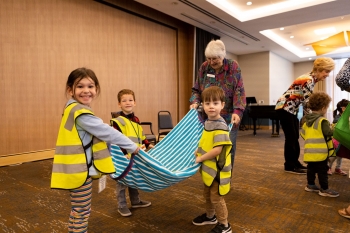 Mirabella at ASU places retirees at the heart of the ASU Tempe campus and its bustling student life to facilitate an intergenerational exchange of living and learning experiences for a thriving community. The community is part of the ASU Learning Enterprise, which designs learning offerings and experiences that serve learners across their entire life span.

“As the New American University, ASU is re-imagining learning across the life span, from pre-K to post-retirement,” said Lindsey Beagley, senior director of lifelong learning engagement for Mirabella at ASU. “The meeting of the two worlds of children from the Child Development Lab visitors, who are some of the youngest members of our community, and Mirabella residents is evidence that connections between generations of learners can be mutually enriching and joyful.”

This isn’t the first field trip of its kind that the children from the Child Development Lab, an early childhood program in the T. Denny Sanford School of Social and Family Dynamics, have taken since Mirabella opened.

Student interns and staff members, who work in the lab to gain experience for their early childhood careers, take the children on supervised campus excursions that promote the children’s early social and cognitive development. With the retirement high-rise only a short walk away, the children and Mirabella residents can enjoy opportunities to interact.

Mary Warren, a Mirabella resident who participated in the event, said, “We know the brain science about the critical nature of a nurturing adult in a child's first 1,000 days for success in school and life. Plus, it is so fun and refreshing to play, sit and listen to toddlers and preschoolers who are just as delighted to be with us.”

Warren is right about the brain science behind these field trips. According to research, intergenerational activities have benefits beyond being fun; they’re good for both children’s and older adults’ health. Children get to develop language abilities, empathy and social acceptance, while older adults experience improved cognitive health, physical strength, social skills and quality of life.

“The residents were so welcoming and eager to participate in the activities with the children, which made it easy for the children to engage with comfort and enthusiasm. We are so grateful for all Mirabella did to make it such a great day for our children.” 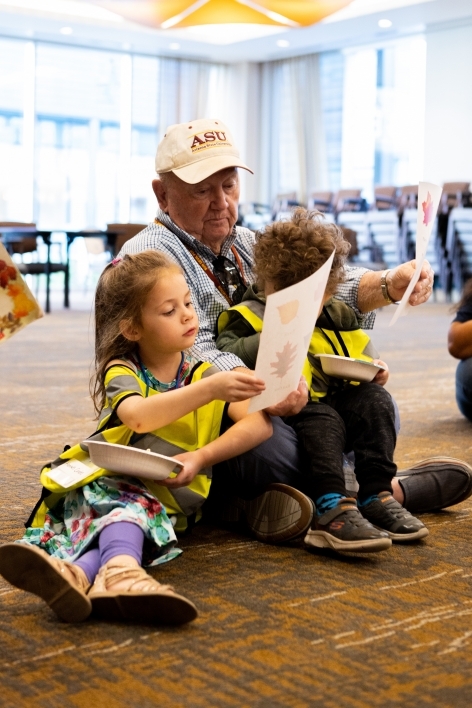 A Mirabella resident and two children from the Child Development Lab look at a handout depicting varieties of fall leaves. 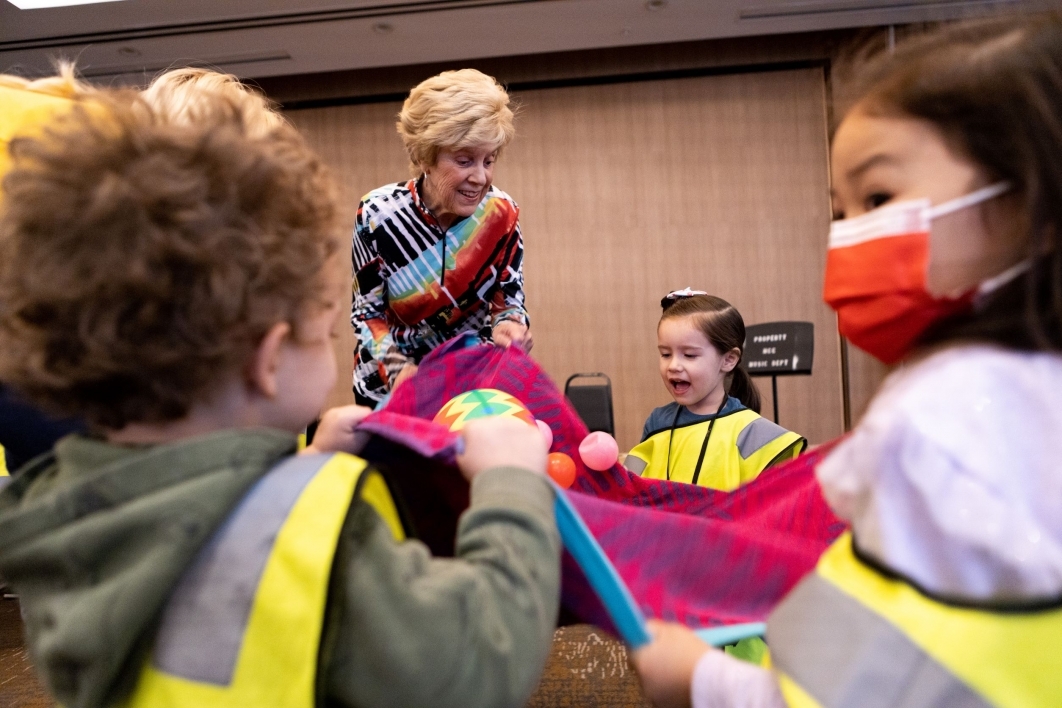 A Mirabella resident and three children from the Child Development Lab play with a blanket and bouncy balls. 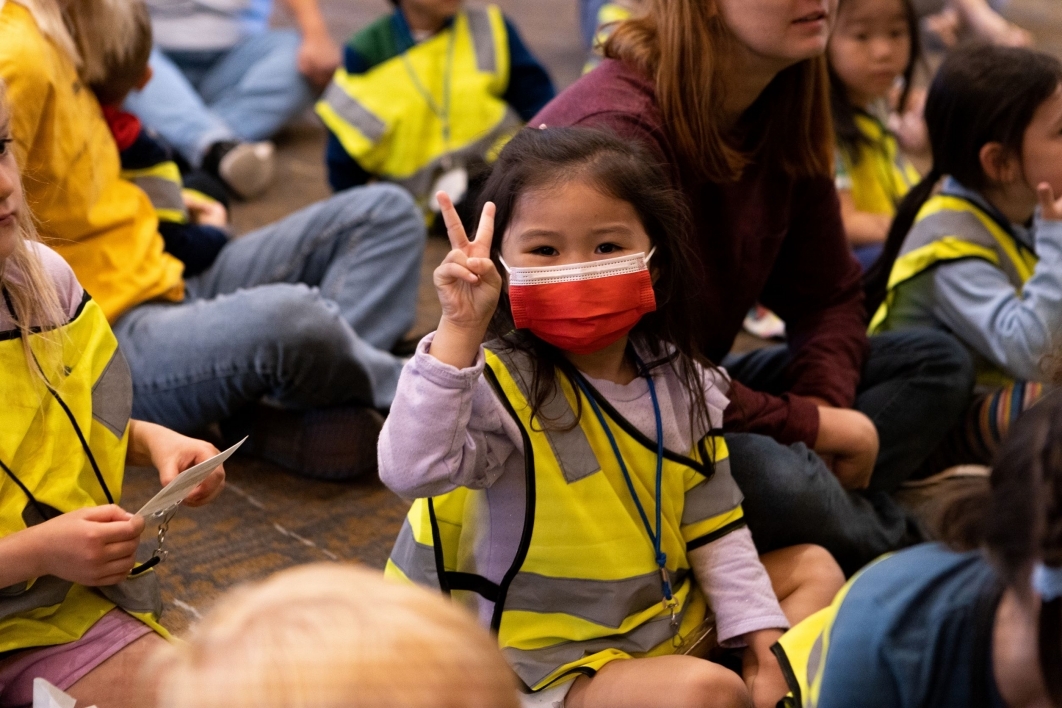 A child from the Child Development Lab poses for a photo while the group listens to nursery tunes. 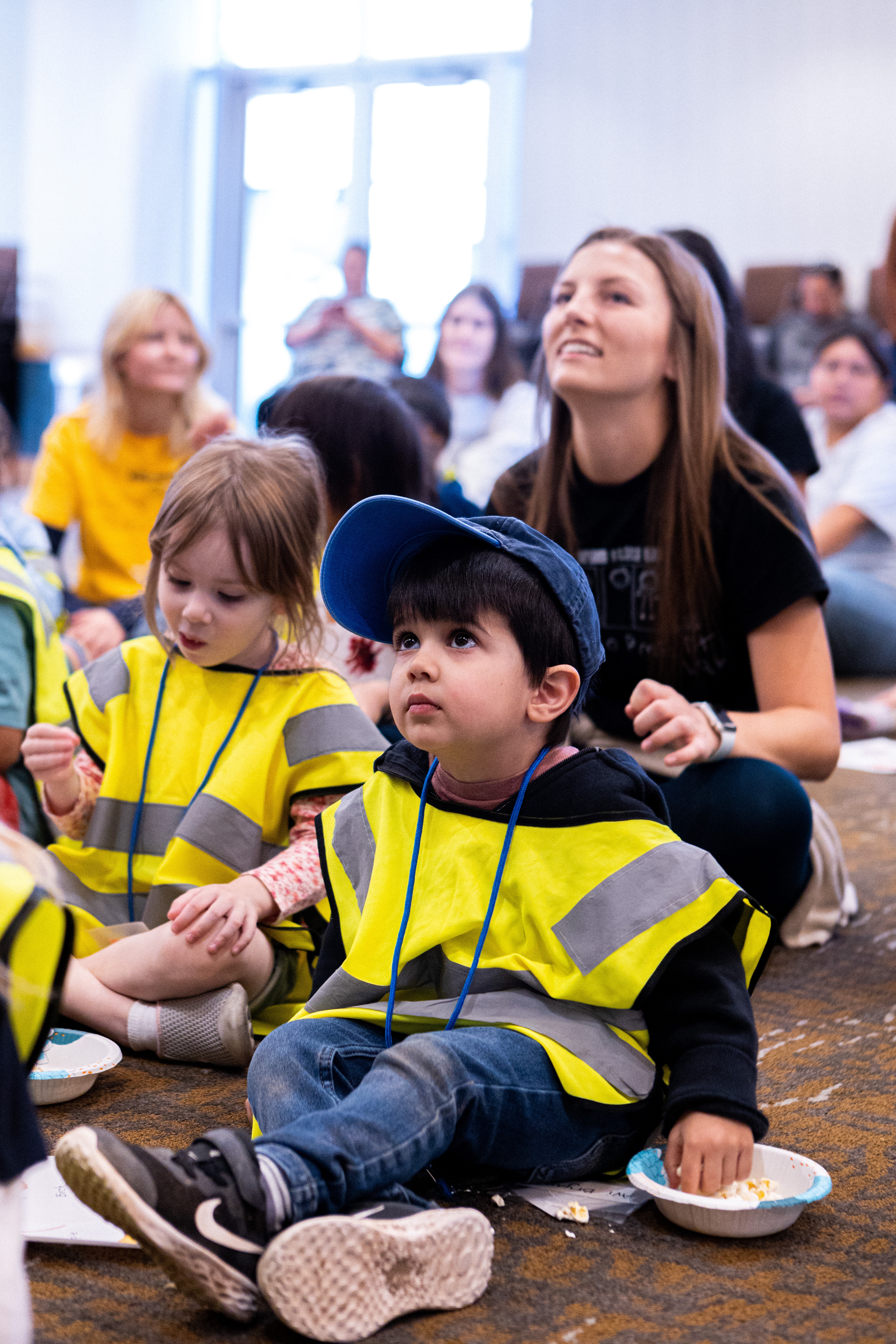 Children and interns from the Child Development Lab eat popcorn while two Mirabella at ASU residents read a story about fall leaves. 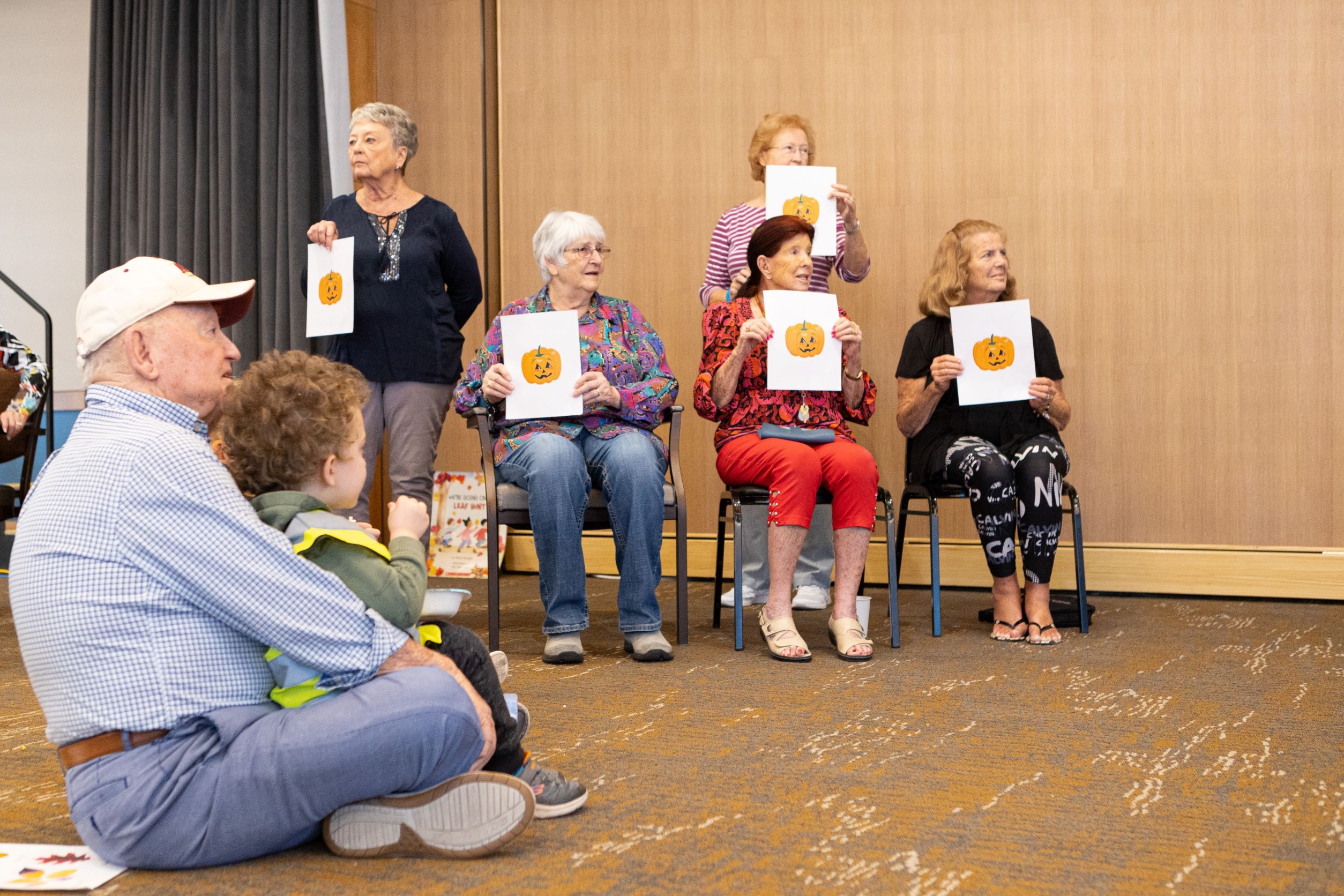 Mirabella at ASU residents sing along to "Five Little Pumpkins" while holding up pictures of pumpkins.