Students adapted 17th century Spanish plays into their own voice

The 5-year-old twins were in bed for the night, sound asleep and unaware of what was happening just outside their home.

Kathleen Berger, their mother, was dressed in black slacks and a white top. She looked at her script, held in a white binder, and began to sing.

“Love, show me the way out of this maze of confusion before I lose my mind,” she sang, her operatic voice ringing throughout the Litchfield Park neighborhood.

It was early April and Berger, a recent online graduate at Arizona State University, was finishing her entry for the 2022 Our New Gold Digital Theatre Festival.

For two minutes and 40 seconds, she took the Spanish play “El muerto disimulado (The Feigned Death)” by Portuguese author Ángela de Azevedo and made it her own, her notes and range of her voice conveying the story of a woman who breaks from the traditional passive female role and takes control of her own narrative.

When her performance was over, Berger slightly bowed, as if she was singing in front of an audience.

Six weeks later, she got the news: Her performance had won honorable mention at the festival.

That’s the end of the story.

It begins with the COVID-19 pandemic and the desire by an ASU Online teacher to create community in a closed-off world.

The Our New Gold Festival began in 2021 and featured a group of Ohio Wesleyan students who wanted to explore new ways of understanding and adapting Spanish classical theater. The 2022 festival focused on plays that addressed current social issues like gender, racial and social inequality, systemic oppression, cultural identity and the environment.

When she heard about the festival, Maria Dominguez, an instructor in ASU’s School of International Letters and Cultures, immediately knew she wanted her students to be a part of it.

“I’ve been teaching Spanish for many, many years at ASU but my expertise is in theater,” Dominguez said. “So when theater collapsed because of COVID and people couldn’t go to any of the places they used to gather, and all of these companies were saying, ‘How can we express ourselves?’ I put one and one together and said, ‘Well, this would be great for my students.’”

Dominguez held a Zoom call with students in several of her classes to explain how they could take written assignments they had to do for class and turn them into video entries for the festival.

The one rule: The digital entries couldn’t be more than five minutes. Otherwise, the students were free to explore their creativity in how they adapted the Spanish plays. 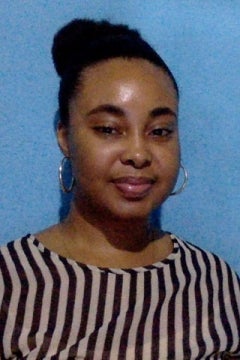 In her video, Nisbett, who lives in the Caribbean, laments how she could have been so foolish to fall for Canizares’ lies. She plays three different characters in the video: Dona Lorenza, Hortigosa and Cristina.

“I found it quite interesting, not necessarily because it’s relatable to me, but because it’s a problem that females face in that they’re sometimes subject to abuse by men,” Nisbett said.

Six ASU entries were chosen for the festival, which welcomes entries from students and recent graduates from across the country. Nesbitt was named a finalist, as was Ashley Arrien, who performed a new version of Pedro Calderon’s “La dama duende (The Phantom Lady),” in which a man falls in love with a woman who is either hidden, veiled or encountered in the dark.

In her adaptation, Arrien lies on her couch and grieves about being “invisible” because she has no internet and can’t post on social media.

“I’m literally going to die,” she cries in the anguish of a millennial.

“We have all these incredible playwrights, and then you put them together with hashtags, with influencers, with TikTok — the topic is still the same, the feelings are the same, the meaning is the same, but the language is different,” Dominguez said. “It’s an inventive way to explore these works.”

Berger, who began her education at ASU in 1989 as a vocal performance major and in 2020 received her bachelor’s degree in Spanish, was a student in Dominguez’s Foundational Texts of Spain class. When she received the assignment to rewrite a Spanish play and then record herself speaking it, she asked Dominguez if it would be OK to sing the assignment.

“She said, ‘Absolutely,’” Berger recalled. “She was very enthusiastic about it.”

In addition to benefitting from her 35-plus years as an actor and opera singer, Berger had good timing on her behalf. While she was taking her class, a young composer and actor named Joshua Vern was living with her and her husband and helping to take care of the kids.

“So, I asked (Vern), ‘Is there any way I could hand you a short monologue in Spanish and you could write me music for it in four days?’” Berger said.

Vern got the job done, and four nights later, Berger was singing outside her home.

“What could have been — not a throwaway — but a relatively easy assignment because doing a monologue is something I have had experience with for more than 35 years, turned into a very, very cool project,” Berger said.

As it turns out, an online education at ASU isn’t confined to a laptop and Zoom call. It can place a mom of 5-year old twins and a shy Caribbean woman in 17th century Spain and at a festival that celebrates their talent and creativity.

“It’s really something how it brings people together,” Nisbett said. “I’ve had the opportunity to meet and interact with persons in places that I’ve never seen. It’s really a community.”

A new art exhibit opening as a special engagement at Arizona State University depicts the richness of culture in the 20th century American South through the eyes of acclaimed folk artist John Daso.“The Gifts of Daso: Let Me Tell You the Story” will be presented Sunday, Nov. 14 as a special engagement in the Harry Wood Gallery at Arizona State University’s Tempe campus. The show will feature ...

A new art exhibit opening as a special engagement at Arizona State University depicts the richness of culture in the 20th century American South through the eyes of acclaimed folk artist John Daso.

“The Gifts of Daso: Let Me Tell You the Story” will be presented Sunday, Nov. 14 as a special engagement in the Harry Wood Gallery at Arizona State University’s Tempe campus. The show will feature an opportunity to engage with the artist and join him for a lively gallery talk highlighting his work and career in the arts. 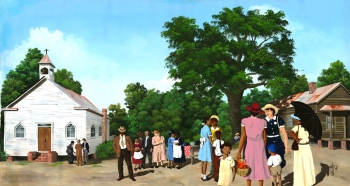 "The Big Meetin’" by American folk artist John Daso was inspired by the artist’s love of his grandmother’s deep-dish sweet potato pie often enjoyed during Revival time at this home church when he was a child.

“The School of Art is thrilled to exhibit Mr. Daso’s paintings and thankful for his willingness to engage with our students,” said Forrest Solis, associate professor and director of the School of Art at ASU. “Mr. Daso’s paintings are an important contribution to our cultural narrative and we are grateful for the opportunity to learn about his process and the stories behind the people and places he depicts.”

The exhibition is the result of a community collaborative led by Florence Franklin, a local business leader and philanthropist, and Eula Dean, a local education leader, and community advocate. Together, they introduced the idea for the exhibit to ASU’s Educational Outreach and Student Services earlier this fall as a community engagement opportunity and art education experience for students. EOSS embraced the idea and engaged the School of Art to present the exhibit and provide learning activities for K–12 students with ASU Preparatory Academy, and advanced art students with ASU’s School of Art.

“I learned of John's work when I was looking for a painting that reminded me of Charleston, South Carolina, as I lived there in the early years of my career,” Franklin said

“What I found was a painting that reminded me of my childhood — ‘The Big Meetin’,” Franklin said. “John Daso’s work speaks to you and captures points in time that make you reflect upon your life's journey. I am thrilled to be a part of sharing his artistry with the Valley,” she added.

“Arizona State University is proud to join with esteemed community partners, Florence Franklin and Eula Dean to offer an art experience to the ASU and Greater Phoenix community that educates and is reflective of the multicultural fabric of communities across America,” said Sharon Smith, vice president of outreach partnerships with Educational Outreach and Student Services. “ASU is deeply committed to community engagement and inclusion as evidenced by our charter, and this collaboration was a perfect fit with our mission,” Smith said.

Solis expressed her thanks to the organizers for providing such a valuable opportunity for the School of Art to engage with Daso and present his work to the ASU community and beyond.

“Also, an important story is that of his life’s journey as a prolific artist, successful entrepreneur, and a valued community leader, especially for our students who are at the start of their own artistic careers,” Solis said.

Join ASU and community leaders, and the exhibiting artist for the unveiling of “The Gifts of Daso: Let Me Tell You the Story.” Meet and hear from those involved and get a behind-the-scenes tour of the exhibition to hear a unique perspective from the artist, John Daso.