Prescott was one of the most influential economists in the world. He was a Guggenheim Fellow, a fellow of the Econometric Society and a fellow of the American Academy of Arts and Sciences. In 2002, he received the Nemmers Prize in Economics, and in 2004, he was awarded a Nobel Prize. 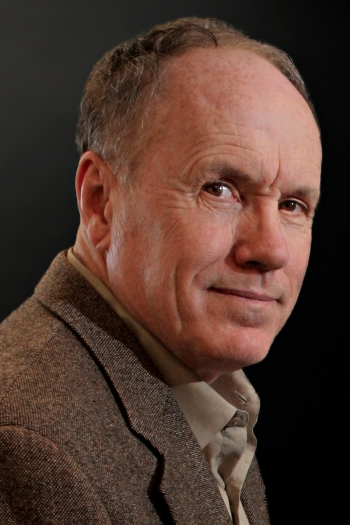 Prescott was born on Dec. 26, 1940, in Glens Falls, New York. He earned his bachelor’s degree from Swarthmore College in Pennsylvania, advanced to Case Western Reserve University in Ohio for his master’s degree and completed his PhD in economics at Carnegie Mellon University in 1967.

Prescott joined ASU in 2003 after previously serving on the faculties of the University of Pennsylvania, Carnegie Mellon, University of Chicago and University of Minnesota. He also held appointments as a visiting professor at Northwestern University, New York University, University of California – Santa Barbara, La Universidad Michoacana de San Nicolás de Hidalgo in Mexico, Australian National University and the Norwegian School of Economics. Since 2009, he also served as the director of the Center for the Advanced Study in Economic Efficiency at the W. P. Carey School. Beyond academia, Prescott served as a senior advisor at the Federal Reserve Bank of Minneapolis since 1981.

His research is foundational to the field — and our modern understanding — of macroeconomics. He and frequent co-author Finn Kydland were honored with the 2004 Nobel Memorial Prize in Economic Sciences “for their contributions to dynamic macroeconomics: the time consistency of economic policy and the driving forces behind business cycles.” The two are considered the architects of real business-cycle (RBC) theory, which argues that a substantial part of business-cycle fluctuations is the result of an optimal response of the economy to policy changes that affect its productivity.

The theory has had remarkable successes when confronted with empirical data. It broadly replicates the essential features of the business cycle and plays a central role in modern dynamic macroeconomics. The impact of Prescott’s work is clear from the five honorary professorships and doctorates he was awarded during his life, as well as multiple fellowships and his election to the National Academy of Sciences.

"Professor Edward Prescott's passing is a huge loss for the W. P. Carey School of Business community,” said Ohad Kadan, dean of the W. P. Carey School. “His contributions to economics research were foundational, and his work transformed macroeconomic policy. His passion for economics has made a lasting impact on the field, and his tremendous presence and incisive insights will be greatly missed."

Prescott was known for sharing his tremendous knowledge with the W. P. Carey School community.

“Whether it was a grad student honored to meet a Nobel laureate or another distinguished professor wanting to dissect a new theory, Ed was always generous with his time and brilliant mind. We will miss him greatly,” said Alejandro Manelli, chair of the Department of Economics.

In celebration of Veterans Day, The College of Liberal Arts and Sciences at Arizona State University honored and appreciated veterans and active members of the military during Salute to Service.This year’s celebration was themed “Salute to Service Through Service” and honored both civilians and military who are making a positive impact by serving others.The College, in partnership with the P...

In celebration of Veterans Day, The College of Liberal Arts and Sciences at Arizona State University honored and appreciated veterans and active members of the military during Salute to Service.

This year’s celebration was themed “Salute to Service Through Service” and honored both civilians and military who are making a positive impact by serving others. 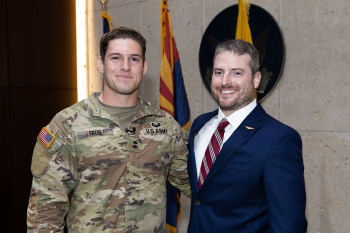 The College, in partnership with the Pat Tillman Veterans Center, hosted a Salute to Service reception, “Honoring Families With a Legacy of Service,” and the annual Dean’s Cup flag football tournament.

“We are proud to honor the service of veterans, active-duty military members, ROTC students and their families during ASU’s Salute to Service,” said Patrick Kenney, dean of The College of Liberal Arts and Sciences. “These events help us recognize the commitment and service shown to our great nation.”

On Friday, Nov. 4, The College held the Salute to Service reception in Armstrong Hall. Students and families, veterans and active-duty staff and faculty joined to hear stories of family and service.

Jack McCain, the son of the late Sen. John McCain, reserve naval aviator for Helicopter Sea Combat Squadron 85 and graduate of the Naval Academy, was this year’s distinguished speaker at the event. He began his talk with a story.

McCain spoke of Phoenix-born Frank Luke Jr., who would become the first aviator to receive the Medal of Honor and the namesake for Luke Air Force Base. Known as the  “Arizona Balloon Buster,” Luke altogether scored 18 aerial victories during World War I, 14 of these being German observation balloons, before being killed at age 21.

“Apart from his being the vision of utter heroism, Luke’s example and the example of all of us past, present and future endows a few enduring truths about the nature of what it is to serve,” McCain said. “Like Luke, I know that service has meant a great many things to me, as it did my father, grandfather, great-grandfather and brother.

“I learned of the sweetness that life can hold when truly lived, both for the dangers I encountered, the deprivation of long deployments and the eventual, blissful and sometimes difficult return home. ... I found pride in watching nervously as those who would otherwise have perished were hoisted out of the roiling ocean and into my aircraft, sodden and scared but alive. I found a greater love for my own home while teaching others to fight for theirs. Still, what I savor most is the gratification I found knowing that I played a part, however small, in the history and legacy of the United States, just like so many of you have here today and others will.”

McCain shared that he did not really understand the title of veteran until wearing it himself.

“We are husbands and wives, sisters, cousins, cooks and cavaliers, sage and screwups. And we are comprised of the human soul of our great country as much as we may now represent something to our nation,” he said. “We represent every facet, every walk of life and every corner of our nation hailing from every clime and place, from the deserts here in Arizona, to the beaches of Guam, to the mountains of Appalachia and even many other nations that are not here. And in that we represent the dream, the story.” 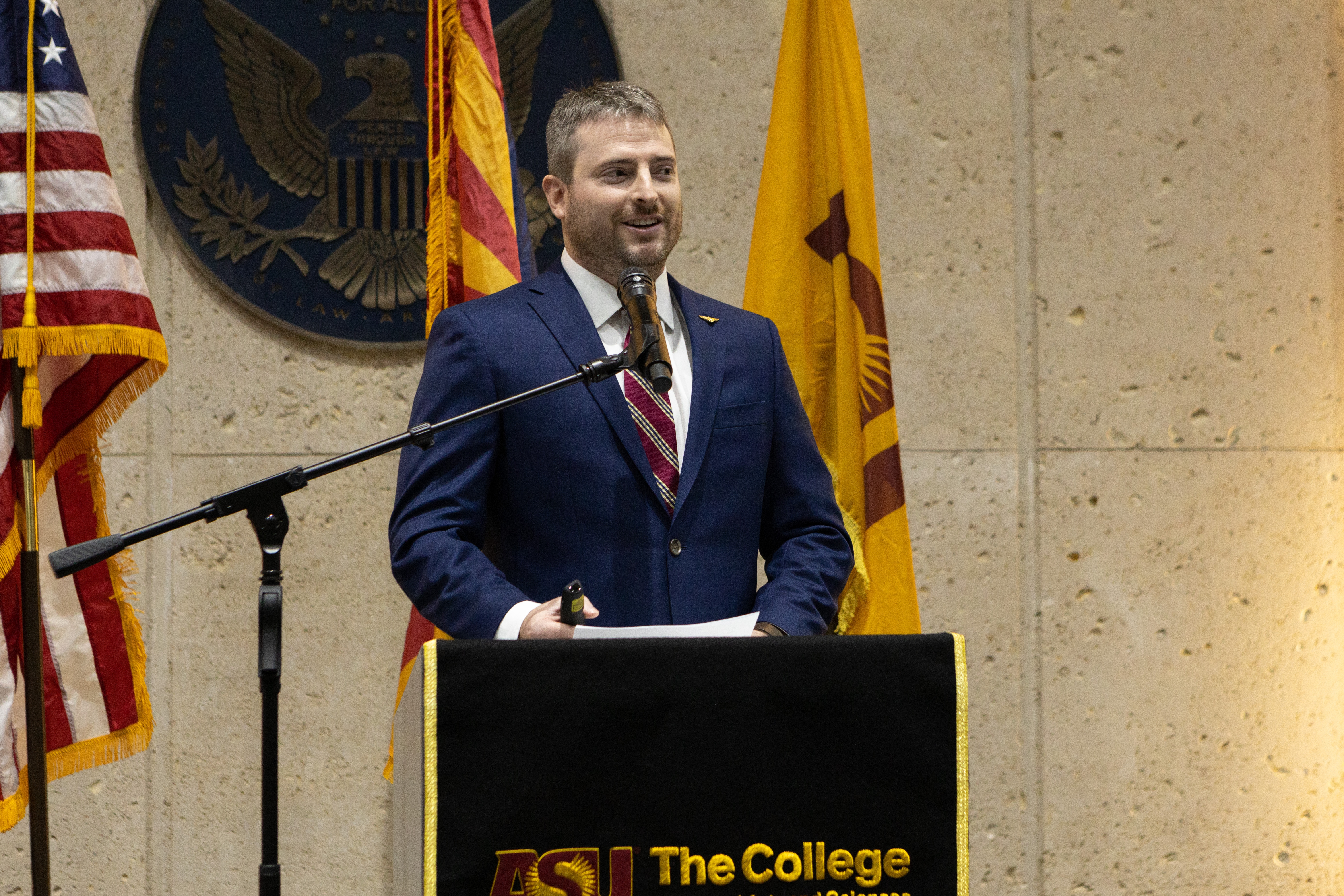 Distinguished speaker John McCain spoke of Phoenix-born Frank Luke Jr., who would become the first aviator to receive the Medal of Honor and the namesake for Luke Air Force Base. 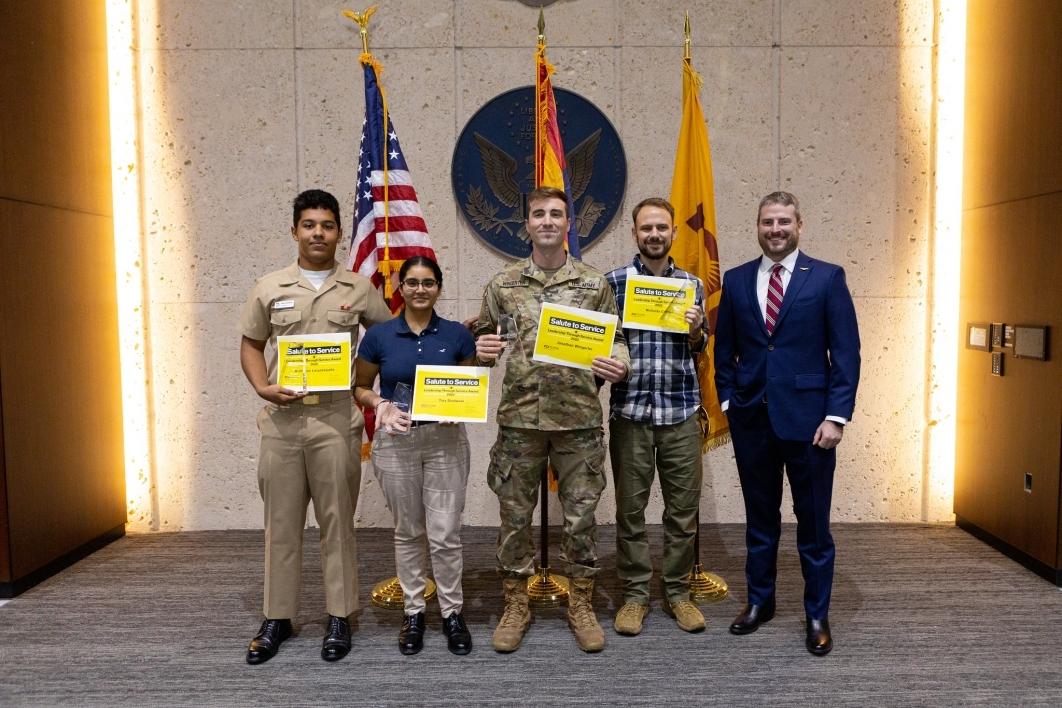 From left: Brandon Largaespada with Navy ROTC, Tina Sindwani with Air Force ROTC, Jonathan Wingerter with Army ROTC and Nicholas Coteus as the Tillman Student Veteran stand with Jack McCain as recipients of the Leadership Through Service Award. 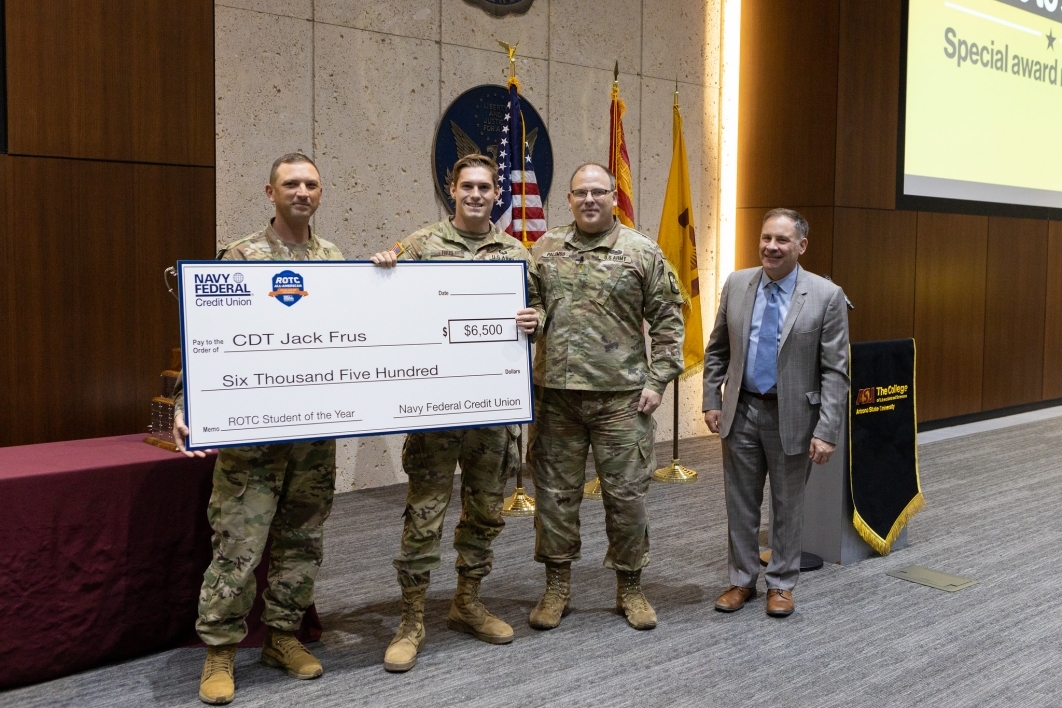 Photographs from the "Veteran Vision Project" by alumnus Devin Mitchell on display during the reception. Mitchell is committed to helping veterans heal and spreading awareness about the challenges they face. 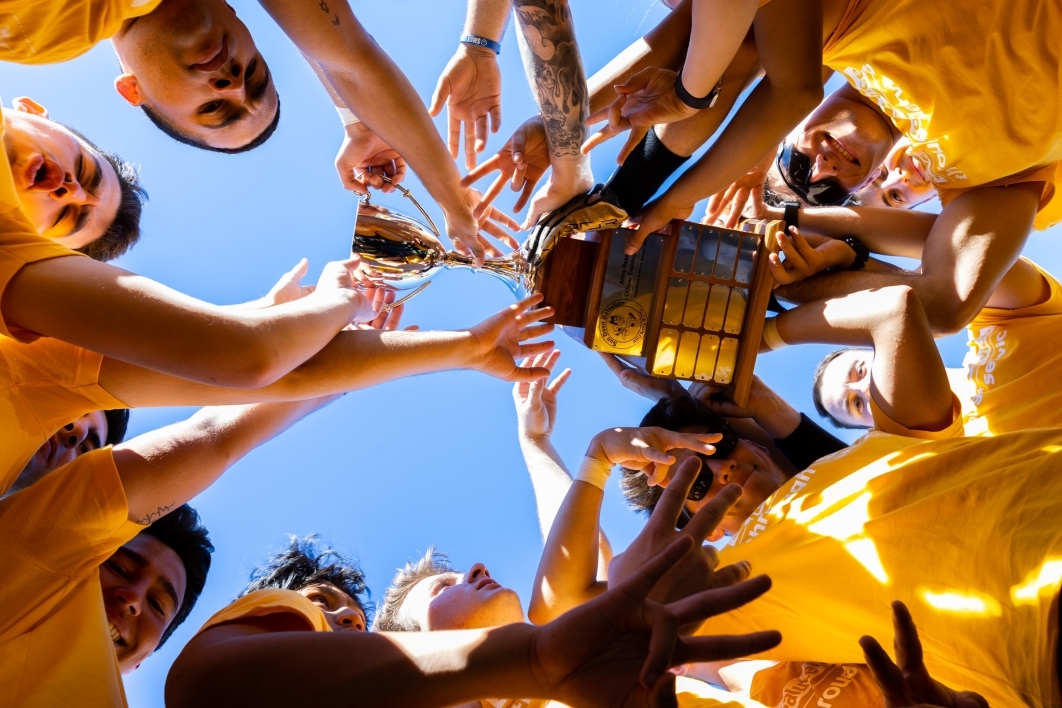 Army celebrates their first-ever Dean's Cup championship win at The College's annual flag-football tournament Nov. 6. The event honors U.S. service members while representing a source of pride for The College: being home to ASU’s ROTC programs. 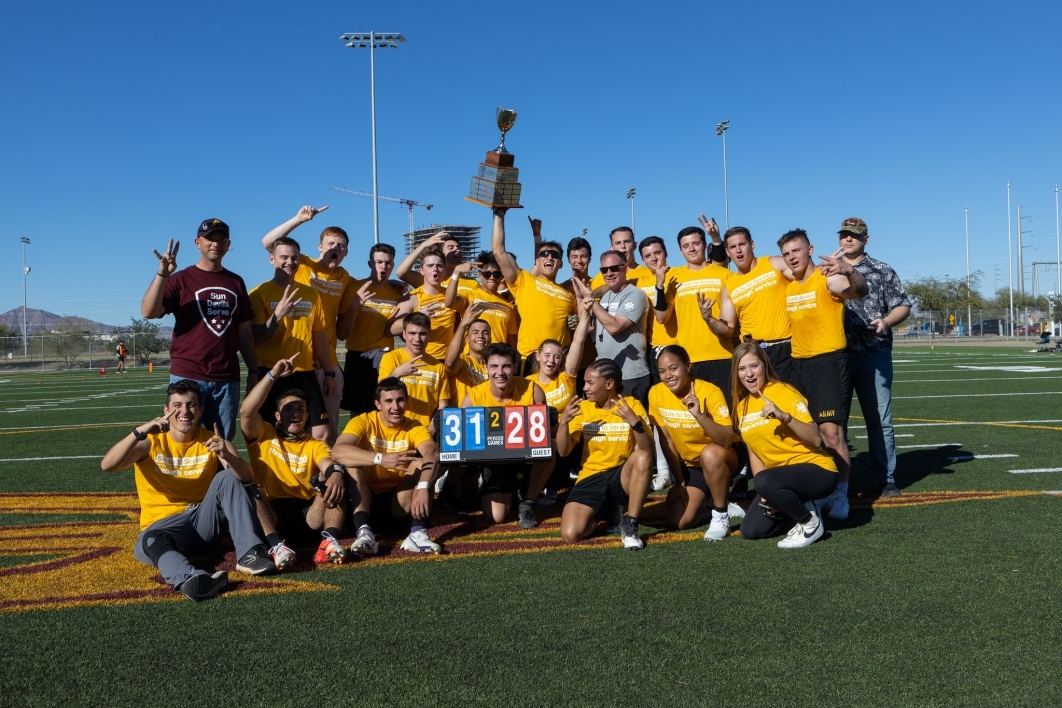 Army overtakes the Air Force in the championship game 31-28 to win the Dean's Cup. 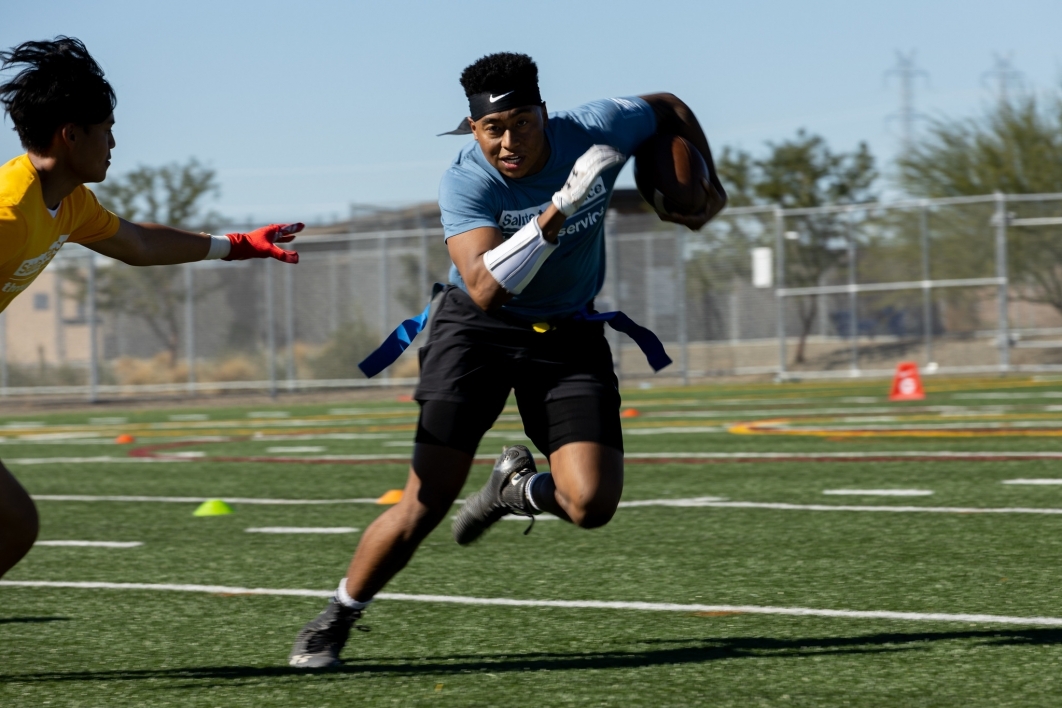 Air Force demonstrated a strong running game in the first half of the championship game. 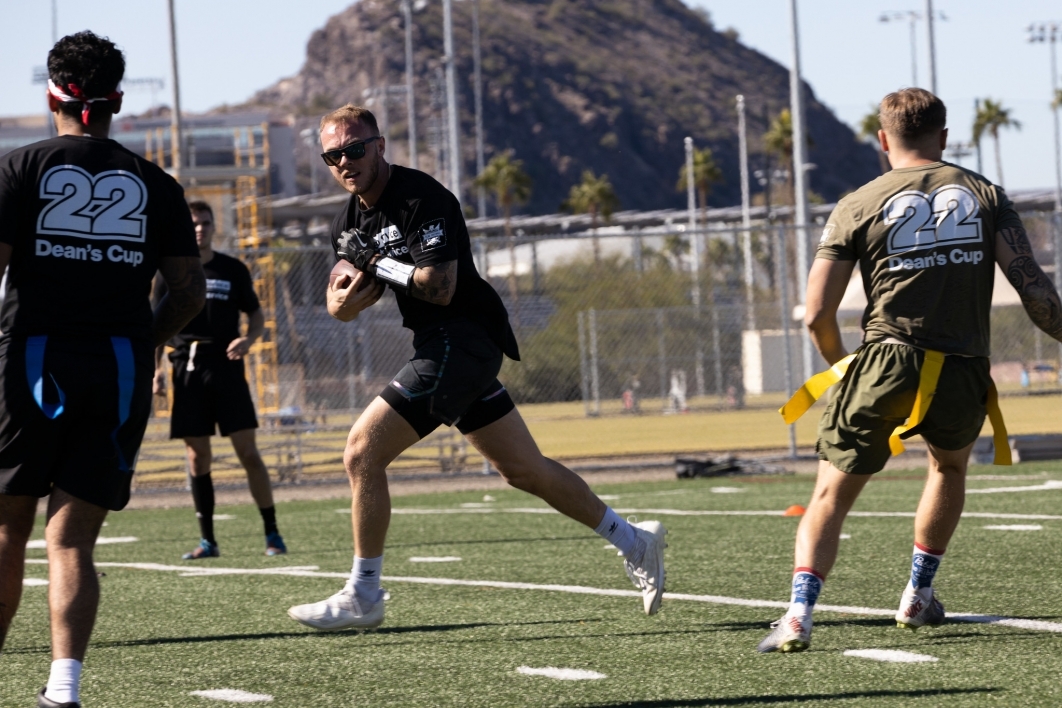 The team from the Pat Tillman Veterans Center (black) won against the Navy (green) 20-12. 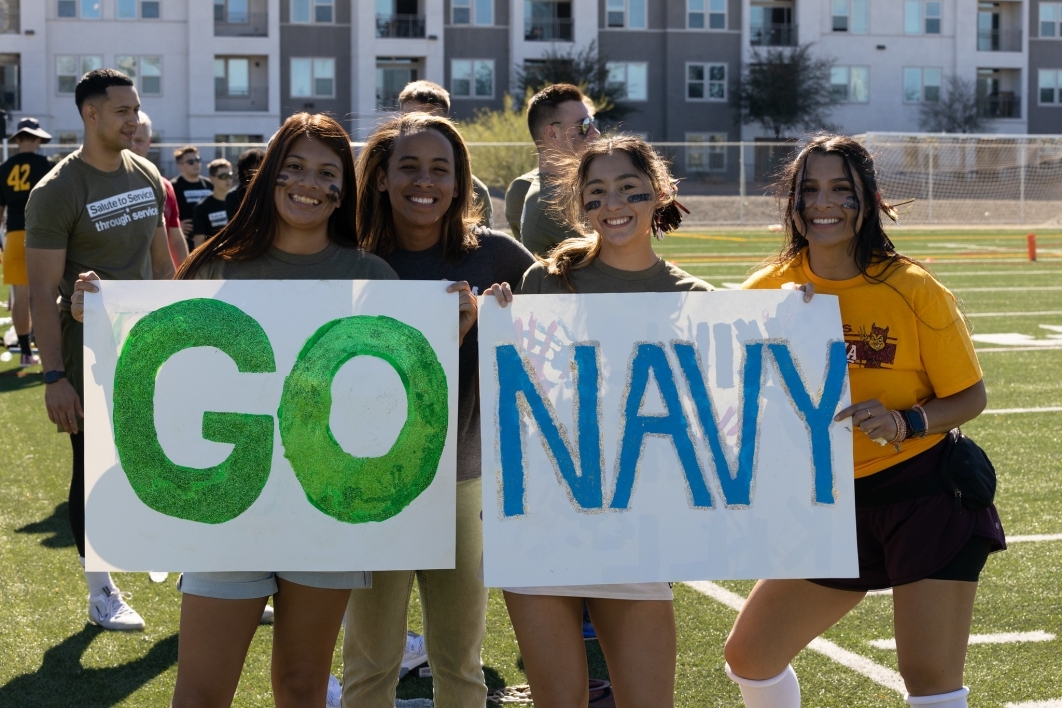 ASU’s Navy and Marines had a large and proud cheering section at the 2022 Dean's Cup.

As part of the event, four students were recognized for their achievements and commitment to service. Brandon Largaespada with Navy ROTC, Tina Sindwani with Air Force ROTC, Jonathan Wingerter with Army ROTC and Nicholas Coteus as the Tillman Student Veteran all received a Leadership Through Service Award of $1,000.

“The College is pleased to start our own tradition of recognizing students who exemplify what it means to serve,” said Paul LePore, associate dean for student and academic programs at The College. “All four of these students have proven to be role models to their peers, embodying their qualities of leadership through their service to others and the wider community.”

Later, guests were able to browse photographs from the "Veteran Vision Project" by alumnus Devin Mitchell, who is committed to helping veterans heal and spread awareness about the challenges they face. The project captures the striking diversity of veterans and their unique experiences in uniform as well as their lives after service.

On Sunday, Nov. 6, The College geared up for its annual flag-football tournament, which honors U.S. service members while representing a source of pride for The College: being home to ASU’s ROTC programs.

Student veterans from the Pat Tillman Veterans Center and students from the Army, Air Force, Navy and Marine ROTC units competed to take home the coveted Dean’s Cup during a morning of competition, community and camaraderie.

The reigning champion Air Force ROTC cadets were defending their title, but the Army won the tournament, securing their first championship, and will have the honor of “owning” and proudly displaying the Dean’s Cup trophy until next year.

Director, Marketing and Communications, The College of Liberal Arts and Sciences