NIH grant allows comparison of midlife experiences across the world

Many American adults aged 40 to 65 are struggling. The life expectancy of this group is declining, driven by disease and “deaths of despair” like drug overdoses and suicide. Research from Arizona State University has shown they are also less healthy, mentally and physically, than previous generations of Americans were in midlife.Frank Infurna, associate professor of psychology at ASU, is d...

Down Goes No. 1 Minnesota! Hockey Stuns The Golden Gophers in Overtime Thriller

NIH grant allows comparison of midlife experiences across the world

Many American adults aged 40 to 65 are struggling.

The life expectancy of this group is declining, driven by disease and “deaths of despair” like drug overdoses and suicide. Research from Arizona State University has shown they are also less healthy, mentally and physically, than previous generations of Americans were in midlife. 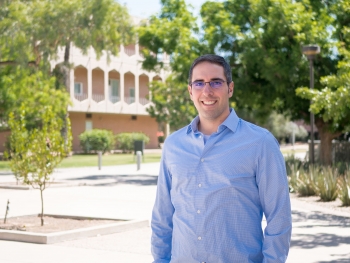 Frank Infurna, associate professor of psychology at ASU, is determined to find out why this is happening and what can be done to mitigate or even prevent these phenomena.

“Our previous work has shown that middle-aged adults in Germany, Mexico and South Korea are thriving. People born in the 1960s in those countries are doing better than people born in the 1940s and 1950s. But in the U.S., the opposite is true. Middle-aged Americans are doing worse than their same-age peers in other countries and compared to other birth cohorts of Americans,” Infurna said. “We want to know if these trends exist in other high-income countries like the U.S. and quantify any differences.”

Infurna was recently awarded five years of funding from the National Institute of Aging to dig into how the experience of middle-aged Americans directly compares to middle-aged adults in other wealthy, industrialized nations across the world.

The power of harmonized data

To study middle-aged Americans, Infurna relies on large datasets that include information about mental and physical health, years of education and finances.

These data sets are made up of nationally representative samples, which means that demographic characteristics like age, race, ethnicity, gender, marital status, income, education and employment of the participant group are matched to the country as a whole. Such data sets give researchers like Infurna a broad picture of what middle-aged adults experience.

When the information that makes up these data sets is collected in different ways — for example cognitive health might be measured using two distinct questionnaires — researchers can only make indirect comparisons based on general trends. Previous work from Infurna’s lab has compared middle-aged Americans to peers in other countries, such as Mexico, South Korea, Australia and Germany, in this way.

Infurna’s current work will leverage harmonized data, which means the contents of one large-scale data set can be directly compared to another. This project will use nationally representative data sets from the U.S., England, South Korea, China, Mexico and parts of Europe, including Germany, Spain, France, Greece and Italy. In summary, the researchers will compare middle-aged Americans to their peers located in 16 other countries.

“These data sets are big, which is important for the questions we want to answer. The U.S. data set — The (University of Michigan) Health and Retirement Study — includes over 30,000 Americans older than 50 years,” Infurna said. “We expect that in total, we will be analyzing data from over 100,000 people across the world.”

The harmonized data will let the research team trace the life trajectories that lead to mental and physical health differences between middle-aged Americans and the rest of the world. They will be able to examine finances (like the impact of overall household wealth, income and debt), including specifics about out-of-pocket health care expenses. Comparison of physical activity levels and how middle-aged adults across the world balance caring of aging parents with having children are also possible topics of study.

“This work is the first step in studying the extent to which differences exist and uncovering reasons why differences exist across countries,” Infurna said. “Any findings could also contribute to identifying factors that can promote resilience among adults in midlife and inform prevention and intervention efforts.”