The Flagship Hub will launch on Oct. 19 at the Rob and Melani Walton Center for Planetary Health during a series of events featuring leadership from ASU and global humanities and sustainability organizations.

The events will not only serve as a celebration of the Flagship Hub, but also as a demonstration of BRIDGES’ capacity to connect and support individuals and organizations who are already working within the intersection of humanities and sustainability sciences. Providing the foundation and resources needed for successful collaborations between these fields is a priority for the coalition, which is why the BRIDGES Flagship Hub team has designed their launch events to bring together thought leaders from ASU and international entities.

”As a humanities-led sustainability science coalition that is not limited to the humanities, BRIDGES works to promote transformative collaborations across the academic domains of the humanities, the arts, the social sciences and the natural sciences in partnership with non-academic communities of knowledge and action,” says Steven Hartman, founding executive director of the BRIDGES Coalition. ”In our expanding efforts to build this global coalition, we have been particularly interested from the start to partner with communities of practice, interest and purpose that bring untapped wisdom to the table of sustainability science and action.”

After the official launch, the coalition will host a variety of panels and lectures. These events will feature speakers from ASU's Institute for Humanities Research and Humanities Lab, Future Earth, Humanities for the Environment, the International Council for Philosophy and Human Sciences, the Club of Rome and the Global Futures Laboratory.

Gabriela Ramos, assistant director-general of UNESCO for social and human sciences, one of the day’s featured speakers, says that BRIDGES is both “timely and important.”

“UNESCO has a key role to play in making the coalition effective and impactful, and I wish to affirm our commitment in this regard,” Ramos says. “What we expect from BRIDGES intellectually is a rich understanding of sustainability as the organizing framework for a new kind of science.”

“Addressing the challenges of the Anthropocene requires solutions based on deep understanding of human sciences, humanities and arts in addition to the natural sciences,” says Shrivastava. “BRIDGES can be a platform that serves this unification of knowledge. It seems to me that BRIDGES serves a purpose in the humanities, human and social sciences and the arts akin to what Future Earth (another UNESCO supported initiative) did in the natural sciences.”

In April, ASU was ranked No. 1 in the U.S. and No. 2 globally in the Times Higher Education Impact Rankings for work supporting the United Nations Sustainable Development Goals (SDGs). Leaders at the Global Futures Laboratory recognize that the humanities are an essential part of efforts to achieve the SDGs, both at ASU and globally.

The Global Futures Laboratory has displayed its commitment to the humanities by establishing 14 focal areas, including the environmental and human sciences; Indigenous knowledge systems; and narrative storytelling. The BRIDGES Flagship Hub aims to be an exemplar of how humanities-driven sustainability research and projects can produce outcomes that advance humanity closer to the SDGs.

“As a global coalition of high-impact networks and strong organizations, BRIDGES is project-oriented, seeking to integrate the humanities, arts and educational disciplines with mainstream scientific domains long at the center of the sustainability agenda,” says Joni Adamson, a President’s Professor of environmental humanities in the Department of English and founding director of ASU’s BRIDGES Flagship Hub. “When people look for expertise in the humanities — within the United Nations family of organizations, Future Earth or in science-policy contexts such as IPBES or the IPCC — they will look to BRIDGES, with the Flagship Hub at ASU as a critical point of contact.”

The team positioned its chairs around the table and started to talk.The Hacks for Humanity event, put on by Arizona State University’s Project Humanities, was just a couple of hours old and the team of Neha Balamurugan, Mihir Goyenka, Bhrugu Dave, Emma Williams and Sarah Tahir had to come up with a hack that, well, helped humanity.They began discussing issues around aging and wellness, and Tahir... 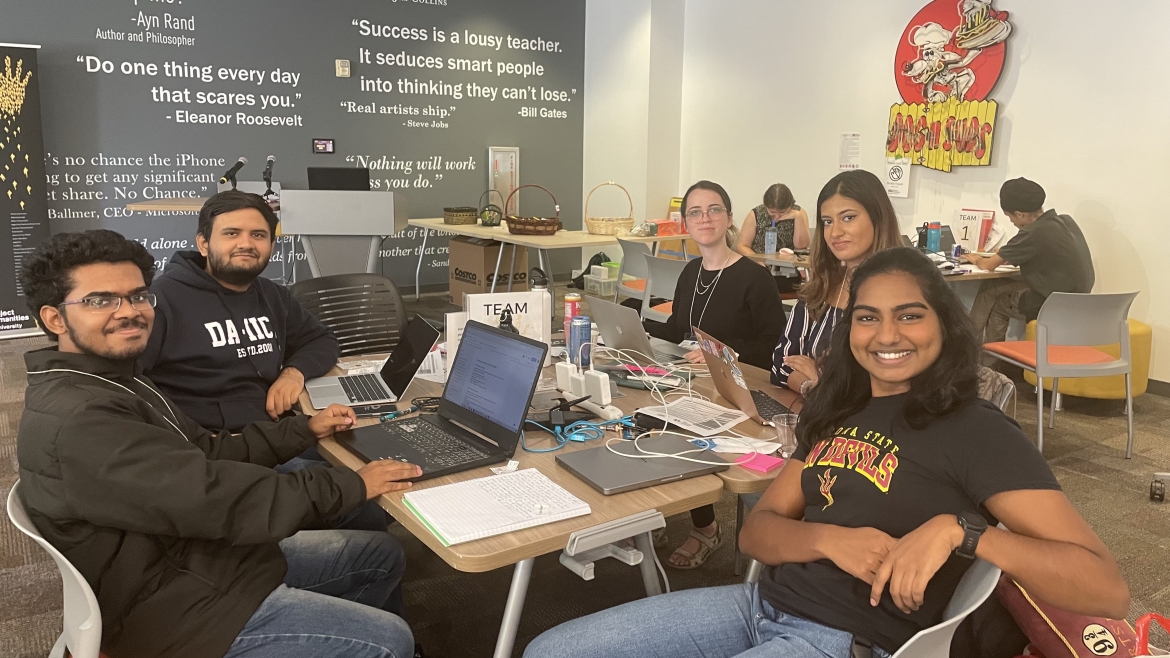 The team positioned its chairs around the table and started to talk.

The Hacks for Humanity event, put on by Arizona State University’s Project Humanities, was just a couple of hours old and the team of Neha Balamurugan, Mihir Goyenka, Bhrugu Dave, Emma Williams and Sarah Tahir had to come up with a hack that, well, helped humanity.

They began discussing issues around aging and wellness, and Tahir, a paralegal, mentioned how difficult it was even for those in the legal profession to find their way through the maze of the health care industry.

“There was an issue with caregivers not being able to access resources easily,” said Balamurugan, a second-year junior at ASU majoring in computer science. “So that’s kind of what the basis for our project was.”

Thirty-six hours later, the team had invented CareUp, a prototype of an app that would allow caregivers to more easily find programs and resources in their local community.

The idea won the first-place prize at the event, which was held Oct. 7–9 at SkySong, ASU’s Scottsdale Innovation Center, and challenges participants to create solutions for local and global issues. The annual event draws some 150 to 200 participants, including students, faculty, staff, professionals and community members.

The need for the app became obvious as the team began diving into the problem.

One example: Goyenka, who is pursuing his master’s degree at ASU in computer science, said caregivers tending to family members with Alzheimer’s can more easily find information and resources on the internet because Alzheimer’s research is highly funded and there are specific nonprofit organizations set up to support those who have the disease.

But it may not be as easy for the caregiver who is taking care of a family member who has, say, debilitating arthritis or a psychiatric disorder.

“If you look at it overall, this industry is pretty much fragmented,” Goyenka said. “There is no one-stop solution.”

“Everything that has to do with health care, whether you want to go into it from a professional standpoint or a patient standpoint is extremely, extremely difficult," added Williams, a second-year student who comes from a pre-med background but is now studying classical civilizations in ASU’s School of International Letters and Cultures. “That’s just the aim of this app. If there’s one way that we can make it simpler, then we want to do that for anyone that’s involved.”

In addition to helping caregivers take the best care of their family members, the app would help reduce the inevitable stress that arises from tending 24/7 to a loved one.

“Caregiving does not happen in a vacuum,” Balamurugan said. “Caregiving happens in addition to the personal responsibilities of the caregiver. They’re still running their own lives but also trying to take care of someone that they love and care for.

“If you’re in a mentally stressed environment, and you’re trying to take care of yourself and your family, you’re probably not even thinking there might be something out there to help you. You’re not thinking, ‘Is there a resource that can assist me?’”

How would the app work?

A caregiver would open the CareUp app and type in a keyword, such as "Alzheimer’s," along with their zip code. The search would turn up a page for caregiver information, another page for patient information and two categories of resources: government programs and private programs.

In addition, the app would use artificial intelligence to help caregivers fill out forms, a practice that can be both exhausting and confusing.

“A lot of the government websites have long descriptions that are very unintuitive,” Balamurugan said. “Our app would find a way to summarize that information and give them (caregivers) keywords to fill out the application, because how applications are initially sorted is by seeing if certain keywords are in the responses. If we’re able to simplify the application process buy telling them exactly what keyword to use, their success rate would be significantly higher.”

Clearly, an app of this magnitude can’t be fully developed in 36 hours. Hundreds if not thousands of manpower hours would be needed to compile a database of the pertinent federal programs as well as services in all 50 states.

“What we focused on was proposing the idea and delivering a pitch that this could be a viable solution,” Goyenka said.

And while team members are going their separate ways, they say they are determined to follow through on CareUp’s premise. Balamurugan said she’d like to implement CareUp in a smaller town like Guadalupe, Arizona.

“We’re not stopping here,” Williams said. “We want to keep going and pushing.”